Time is a master trickster. It can fool you into thinking it’s infinite yet disappear in the blink of an eye. It seems like just a few months ago we were meeting up with fellow RVers in the desert over winter talking about travel plans for the upcoming year. But in reality, we’re about to spend our fourth spring here in SW Colorado. We still feel so new at this…sometimes out of our league. But then again, small farm life/farming/gardening/homesteading is deceiving difficult, and very much worth it.

Last year (2019) was not without heartbreak. We lost my sweet boy, Avi, the cat I adopted in 2008, shortly before I met Clark. We also lost Leeloo, the momma hen who hatched the Chicken-Formerly-Known-as-Prince, as well as Jenny (JLo) one of our older hens. And then there was the tragic loss of Buster the goat…which still makes my heart sink. As 2019 closed Cleo, the Wynn’s 19-year-old kitty, died in our care. That’s a lot to go through. 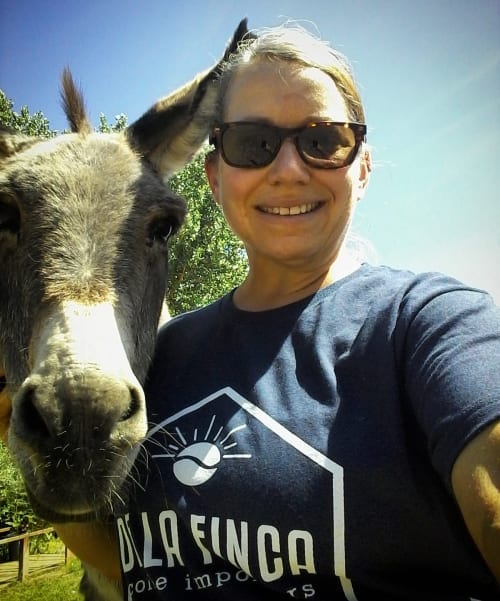 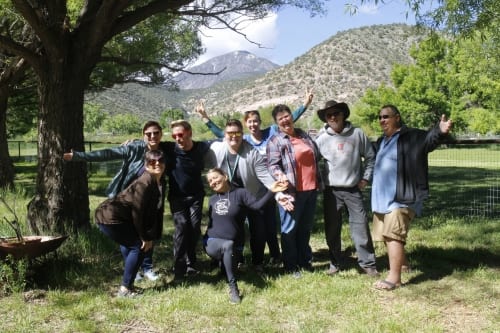 We hosted our great RVing friends, Jeanette and Eric of Jeneric Ramblings, Beth and Taylor of The Learning Banks, Katy and Kristin of the Snowmads, Jill Sessa (and Logan) solo female international traveler, Kevin and Laura of Vegan RV, Brandon and Kerensa of RV to Freedom, and Jason and Nikki of Gone With the Wynns. My sister, Marylou, and brother-in-law, Craig were here New Year Day 2019 and friends, Johnny and Michelle, moving from California to Tennessee made our place a special stop along the way. We also met up with Pauline and Jim Seavey of Goin Anywhere and both my mom and Clark’s daughter came for a visit. 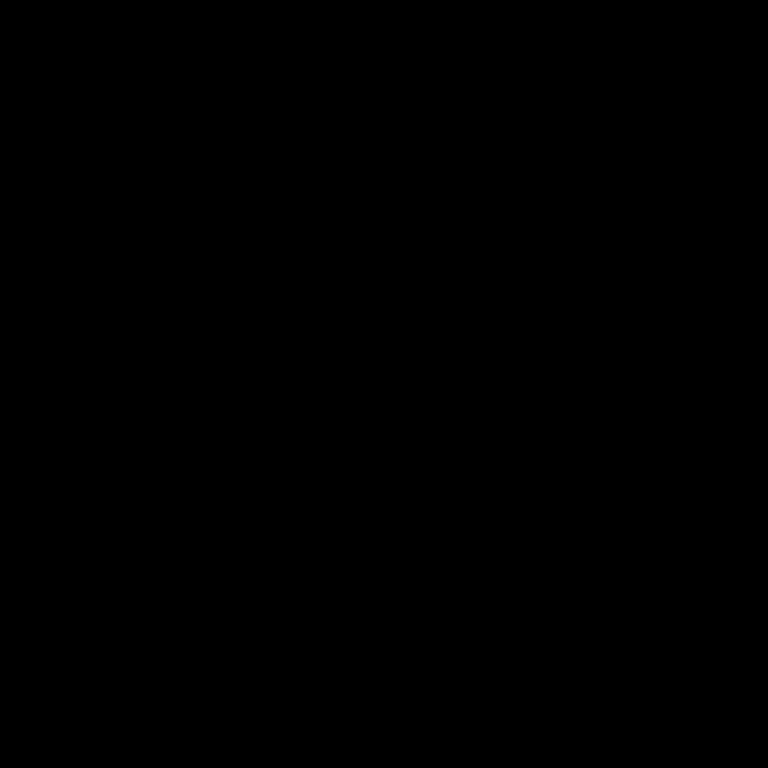 It’s easy to sit here and feel like we didn’t accomplish much this past year. I think that’s another trick time plays on us. We weren’t able to do much of the home renovations we wanted to but we had a constant flow of outdoor projects and a litany of repairs, which seems synonymous with homesteading. At the start of the year, I completed the Master Land Steward Course and, in the midst of all the visitors established myself at both of our local Farmer’s Markets and was asked to place my home-roasted coffee at two different consignment shops. I started the group Cortez Sustainable Gardening and Farming Cooperative and we hosted our first seed exchange, which was a huge success. I managed to grow a few veggies and our fruit trees had a superb season…so we had long days of canning and dehydrating resulting in jams and jellies and pickles we’re enjoying in January. 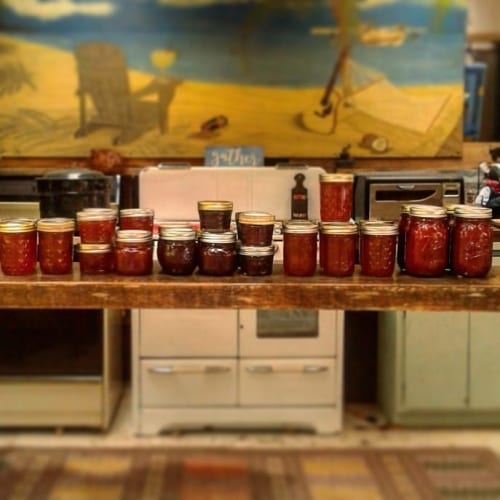 Clark worked on both the exterior and interior of the shop and located and rerouted a secondary septic system so we could use it for our RV, which we will open as an Airbnb this year. Pig accommodations were arranged and rearranged, stalls repaired and the chicken coop was made to house out new turkey hen.  And, of course, a summer filled with making compost, adjusting irrigation water, mowing, planting, animal care, farmer’s markets and a myriad of other duties that leaves one tired yet wondering where all that time went.

Winter is a time when things slow down long enough to sit and chat about the things that went well and what we can do better. Small acre farming is tough and the short growing season is a harsh teacher.

Farmer’s Market Goals: Some changes I would like to make might come as a shock to a few customers but it includes figuring out a better product to sell at the farmer’s market. As much as I love baking sourdough bread it is a lot of work. The process begins on Tuesday evening and doesn’t end until Saturday afternoon. I feed the starter Tuesday and Wednesday…which only takes a few minutes…but then Thursday is busy with dough prep, Friday is an entire day of baking and then Saturday starts as early as 5:30am to get ready for market. Right now my maximum capacity is 24 loaves of bread (an 8 hour bake day)…at $6 per loaf even if I sell out it’s only $144. Not bad until you consider the roughly 24+ hours of labor that I can’t spend doing other things (animal care, gardening, writing, etc). And, if I don’t sell out I bring home a product I can’t save to sell next week. I’ve been working on other offerings that include skin/lip balm, soap, reusable/repurposed market bags, growing herbs year-round and, of course, home-roasted coffee.

Chicken Coop: When we first got chickens I had taken some permaculture courses and decided a chicken tractor was the best thing since iced tea. In our experience that doesn’t work well for our tiny flock…mostly because it’s too much work to move every week and, with our predator issues, it’s not conducive to our idea of free-ranging, pastured chickens. For me, having 16 chickens in a tiny (but moveable) run isn’t the same as allowing our chickens to roam as they please on 2 acres of land. When we’ve had baby chicks they have to go into a separate run that we currently have to borrow. It’s labor-intensive to set up and isn’t as secure as we’d like (it’s also messy). So, our main goal for this spring is to build a new chicken coop large enough for us to walk in, store feed and that Mileva (the turkey) can roost in. Ideally, it would have an area inside that is safe for a small chick brooder should we find ourselves with more babies.

More Crops: Every year I learn more and more about what doesn’t work. Time, that trickster, gets away from me and my seeds get planted late and my seedlings transplanted even later. Let me blame an ambitious baking regime for a moment…yep, I’ve been allowing market obligations to become a boss. The reality is we moved here to grow some of our own food so I’ve started to make changes to put that priority where it belongs…first. So, changing up my market offerings (or eliminating them altogether) is necessary so I can get back to what I really, really want to do, organic gardening. Later today seeds will be planted (herbs and lettuce) and some new varieties of short-season producers have already been ordered. I’ve studied so many organic gardening for beginner books that I should be successful…I’m just not sure which year that will happen!

Solar Dehydrator: I actually have two ambitious builds on our whiteboard in the kitchen. A solar dehydrator and an apple press. But I’d settle for the solar dehydrator…for now. I’ve been working on the plans and researching forums. A friend at market built one at their farm so I’m hoping to be able to get some pointers. It’s like a large cabinet with an attached chimney for airflow. Placed at the correct angle and painted black, to capture the sun’s heat, it uses warm air to dry the food inside. Due to the placement of the chimney, it also creates airflow. It would greatly speed up our ability to dry foods without using electricity.

Landscaping/Beautification: When guests come we usually hang out on the south side of our house where the outdoor kitchen was built. We have a huge picnic table, fire pit, horseshoes, corn hole and shade. We’ve been working on adding flowers, shrubs, arches, hammocks and little nooks to rest and will continue that theme this year.

Sealing the Pond: Right now our pond is seasonal…it fills when we have irrigation water and eventually empties when the water is turned off. Our water was turned off 3 months ago and we still have a little water in their right now. But we’d like to be able to put some fish in the pond to help with mosquito control so having the pond sealed to retain water until it the irrigation returns in April or May would be fantastic. Of course, we may just end up feeding the heron families that return every year to have babies…

Outdoor Buildings: The Winchester Mystery Barn has two stalls but one is being used as a feed room (for safety so none of the animals can gain access and gorge themselves to death…literally). We want to free up that stall so we can use it in an emergency or maybe to move the pigs. They have a pretty awesome log cabin right now but when we added the new pig, Miti, the dynamics change. Now, in inclement weather, there aren’t any good options for feeding in a sheltered area. And we’d like to be able to store larger amounts of hay, straw and shavings.

The RV: Truth be told, we would prefer to sell the RV but it still hasn’t happened. This past year we replaced the flooring in the RV and did some minor redecorating. Right now we are looking at opening it up as an Airbnb this coming spring. We live in a popular tourist area that also attracts visiting archeologists, professional cyclists, artists and outdoor adventurers so the demand is there for a cool rental space. Having the RV up and running as separate living quarters also gives us the option to house an intern or caretaker should the need arise.

The House: As far as the house goes, well…we figure we have so much going on for the animals that there won’t be much time (or money) left for more remodeling. So, we plan on painting the kitchen and the cabinets, adding shelves to the pantry and laundry room and sticking with minor changes…at least for this year.

Animals: I know we’re only 5 days into the new year but we have no current plans to add any more animals this year. We have a full house right now and our place is barely over 3 acres. But…you guys know how quickly things can change and it is our mission to help when we can. Here’s our current count:

Pretty much everyone here is a rescue (except many of the chickens) so if you’re feeling generous we’ve added a Donate Button at the top of the blog. You can also find an on-going Wish List for the animals here.