One of the first ranch projects we tackled was the building of the Chicken Tractor. As “new” farmers with limited experience, we learned that chickens were probably the easiest livestock to raise and generally required the smallest upfront investment. They’re also pretty self-sufficient, compared to things like milk cows, and don’t need much space.

Raising chickens can be part of a “closed loop system” where everything works together…the chickens eat the weeds and help control harmful insects (they love grasshoppers and crickets and other things that like to eat your veggie plants), they till the first few inches of the garden soil mixing nitrogen rich poop, compost and plant material into the ground (so you don’t have to) without disturbing the precious network of bacteria and mycelium like you would with rototilling, they make kitchen scraps disappear in short order and turn all of this into eggs (and meat, if that’s your thing). Once you have enough hens, you don’t need to run to the store every time you run out of eggs (a 15 mile round trip for us)…you just head out to the coop. You also don’t need to find somewhere to dispose of feces ridden wood shavings or straw…instead, put that precious resource in your compost pile. In a true closed loop system you wouldn’t even need to buy chicken feed and instead, would grow what was needed right on your own property (we’ll see if we get to that point some day).

The chicken tractor is a moveable pen that helps control what the chickens have access to at any given time while still allowing them to forage. For instance, rather than have the chickens loose in your garden eating all your new seedlings you can put the tractor over a specific bed (maybe one you’re resting) and allow the chickens to till, weed and poop in just that space. We followed the directions found in the book, Chicken Tractor: The Permaculture Guide to Happy Hens and Healthy Soil (The Straw Bale Edition) by Andy Lee, to build both our chicken tractor and our hay bale house (we had access to free hay and used that instead of straw). We added some snow skis we found for $4 at the ReStore to the bottom of the tractor to make moving it a little easier. I won’t lie, the thing is heavy. Luckily, we can drag it behind the riding lawnmower or ATV and then use our own muscles to maneuver it into position.

It was all working out well until…

We hit a design snag around the time the snow was melting and the days were getting long again. The hens had gone through their molt and had stopped laying eggs for a month or two (normal) and were just starting to lay again. We had tons of eggs it seemed. And then they stopped. Cold turkey. No eggs. They also were refusing to go into the coop at night and chose to roost in the trees near the chicken run. Yep, those girls (Frida and Gertie) were able to fly out of the coop yard and work their way into the high branches of the cottonwoods. We’d get them down and lock them in the coop only to hear rustling and…distress. We soon realized the hay fort coop turned into a mouse disco after lights out. They were everywhere…in the feeder, the waterer, the bales, the ground, the walls, the laying boxes…it was so bad that if we went into the coop and stood still for just 15 seconds the mice would come out and run around our feet. The chickens were seriously in distress and couldn’t rest because of the commotion of the mice. We needed a solution fast.

After a day of research we decided the best way to control mice in the chicken coop was to make the chicken coop completely mobile. In theory, if the coop moves the mice won’t have time to set up their own homestead. Clark came up with a plan to add a coop to the existing chicken tractor. We spent a few days adding a second story loft, complete with roosts and laying boxes, to the tractor. The old “lid” of the chicken tractor became the roof of the coop and we found buckets to use as laying boxes. Clark cut in doors and drilled holes for roosts and we moved the chickens in before we even painted the place.

The tractor/coop is currently sitting in the newly fenced off test garden. The garden measures about 35′ by 50′ and, during the day the chickens have free run of the space (they won’t though once we start planting). They’ve done an excellent job turning over the compost and dirt I laid down last summer in the modified huglekultur beds and they happily put themselves to bed in the new coop as soon as the sun starts to set. We added a third hen, Wynonna the Silver-Lace Wyondotte, and Frida and Gertie have both started laying eggs again (finally!). We also removed all the hay bales from our little barn and put them on the far edge of our property where I can compost them. The mice are slowing moving out, with encouragement from Miso (the cat) and Nellie (the terrier/chihuahua mix). 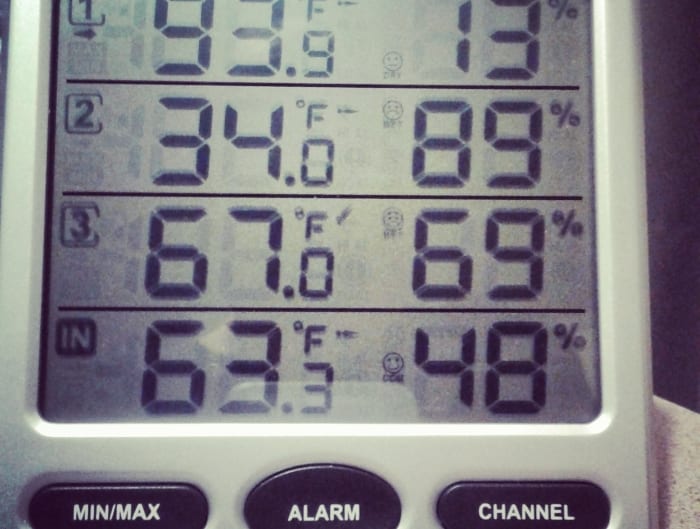 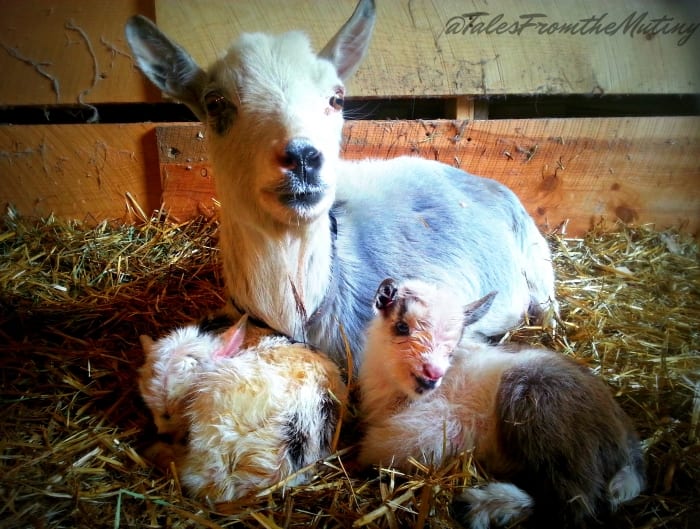 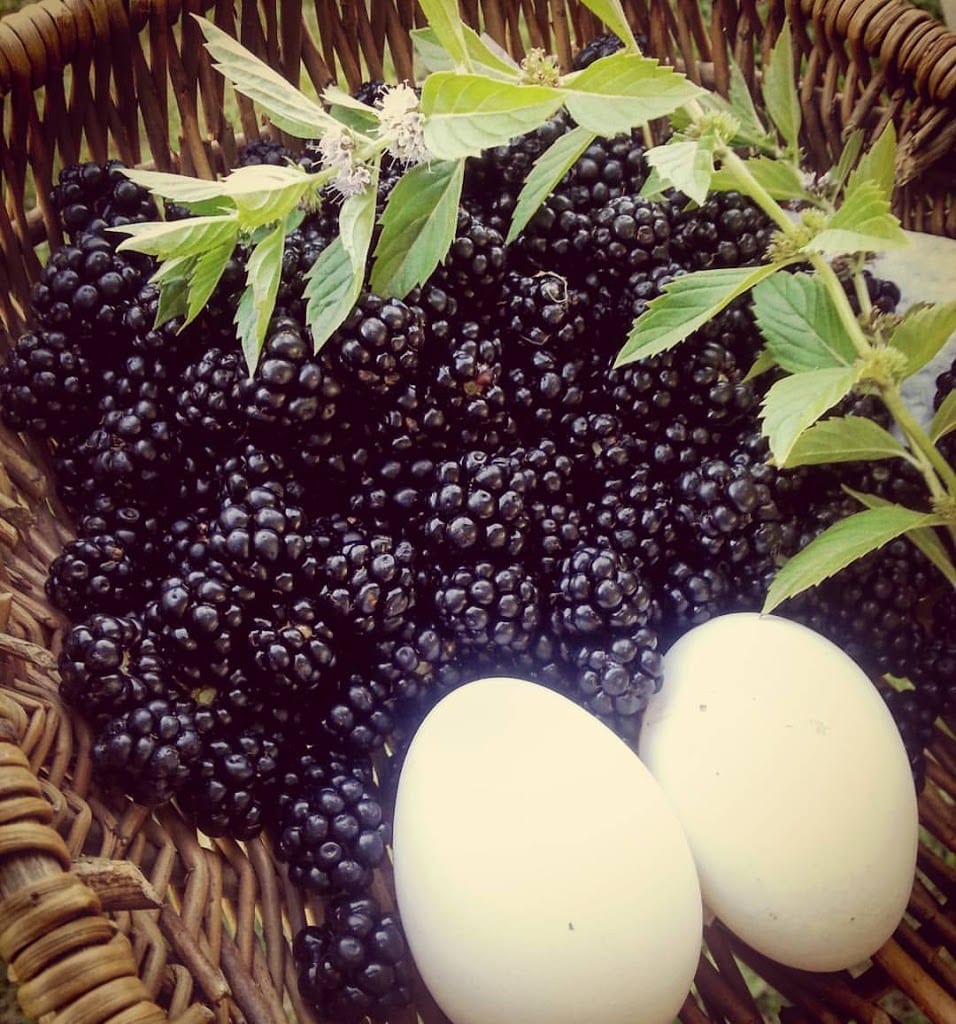 Small Acreage Farming Goals for 2020 – Tales From the Mutiny Reply

[…] Coop: When we first got chickens I had taken some permaculture courses and decided a chicken tractor was the best thing since iced tea. In our experience that doesn’t work well for our tiny […]

That is one nice chicken tractor! Good work.

So glad this brought back happy memories. My grandmother had a large chicken coop in rural Pennsylvania (near the Poconos) and I remember loving to go in to collect eggs. That was the first time I'd even seen double yolked eggs. I have no idea what kinds of chickens she had but I do have great memories. I kinda feel like this little minifarm is a tribute to her.

Very nice! Growing up in rural WA the chickens had the run of the garden from fall harvest till spring planting. My brother and I had the fun of sheep dogs shooing them back to the coop each evening. Good weed control and fertilization, but they took awhile to readjust to coop life. Your chicken tractor is more manageable! No chickens now in SoCal but still have the worms and veggies 🙂 Thanks for the post and refreshing some fond memories.