Just Who Do We Think We Are?

Like many stories, Tales From the Mutiny started as a dream…just two people talking about the future over a couple of Pina Coladas on a much too short vacation to Cabo. The dream, which seemed so wild, unconventional and out of reach, developed into an idea over the course of several vacations…a 10 day trip from Northern California to Oregon along the coast in Clark’s pop-up trailer, a 4×4 adventure one weekend to the Sierras and snorkeling in Belize where we met an expat who gave it all up and now sells frozen margaritas to tourists coming off of the cruise ships. But things got really real when my parents were involved in a horrendous car accident in 2009 that claimed my dad’s life.

In going through his possessions I came across my dads calendar on his computer. In it was listed all of the things he wanted to do…the honey-dos, the tee times, the AA meetings and the trips he had planned…all the things he would never be able to do or see. I still have the computer (it’s the one I’m using to type this) and every once in a while his calendar pops up telling me how many weeks overdue he is on the deadlines he had set for himself. It’s a somber reminder that sometimes startles me, often brings a tear to my eyes but always helps me remember that the path we travel is of our own creation and own choosing.

As we watched the housing market crash we knew California would not be an ideal place for us to continue to live unless we both wanted to work full-time well into the foreseeable future. And we certainly wouldn’t be able to afford to travel. That wasn’t the life we had envisioned…actually, it wasn’t a life at all. Our dream of being unbound by convention, the lessons I learned from watching my dad’s life end before fulfilling some of his own dreams and Clark’s potential retirement looming we knew we had to do something…so we went to Camping World one day to look and came home with the Mutiny.

Granted, there was a bit of research prior to this major purchase. I had been in reading up on blogs written by other full-timers, mainly Living In a Tin Can by Ramona Creel, and learned about domicile, mail forwarding, insurance, downsizing, minimalist living and the different kinds of rigs out there. Clark was in charge of financing, health insurance (through his state retirement) and spontaneity. We had been to a few RV lots and one show and quickly learned that what we thought we needed was not going to be in our price range. Actually, the rigs we first looked at were roughly three times as much as we had anticipated. The first hard lesson we learned was to determine our budget and then look at anything and everything that fell within that budget. Out went the washer/dryer, dishwasher, diesel pusher, king-size bed and anything over 35 feet.

As luck would have it, we found the perfect for us RV on consignment at our local Camping World. The floor plan works for us, the kitchen is very functional, at 32 feet in length we can get into quite a few places longer rigs can’t fit and the price was right. It happens to have a gas engine, which some people seem to poo-poo on…BUT we still have been able to go anywhere and everywhere we want, even if we are slow. 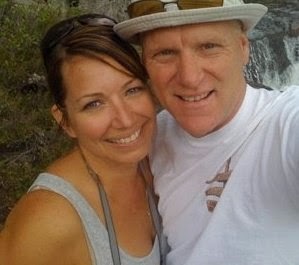 Lynn grew up an Air Force Brat. Born in Japan she then spent the next 22 years moving around the country as part of a military family. She experienced life on the East and West Coasts and eventually Alaska where she went to college. She finally settled down (slightly) in Northern California for work reasons where she kicked off her career.  She dedicated 20 years to the automotive industry working for GM and Subaru as both Warranty Administrator and Service Manager (in a very male dominated business) and later became an independent contractor for her own business Bonelli Warranty Service. On Sep. 15, 2012, at age 41 she quit working for a paycheck and acquired a new full-time job…taking care of Clark, navigating routes, blogging and copy writing. She recently graduated from Sivananda Vedanta Yoga School and is a certified yoga instructor, hoping to bring her passion for yoga to others on the road.

Clark grew up in a huge Italian family in Northern California but spent most of his youth in boarding schools and dude ranches. He spent his early adulthood working as both a plumbing contractor and a musician but quickly realized his body (and retirement fund) would not be able to keep up that pace for long. He found a job with a benefits package that offered retirement at age 50 through the City of Vacaville. It was one of the smartest things he ever did (the others were having his daughter Gina and marrying Lynn). For 20 years he worked hard for the “man” while keeping his eye on the prize and retired the day he turn 50 (and not a minute longer!). His parents had long passed, his siblings had all moved away and his daughter, now grown, had moved to Southern California so, like Lynn, he felt no allegiance to the area.

We met in March of 2009 and quickly found out we shared some of the same dreams and both had adventurous spirits. Clark taught me how to ski and I taught Clark the joy of hiking (okay, he may not see it as joy but he doesn’t complain about it as much anymore). We were  married on Christmas Day 2011 and hit the road as full-timers on Oct. 3, 2012. Currently, there is no end in sight. 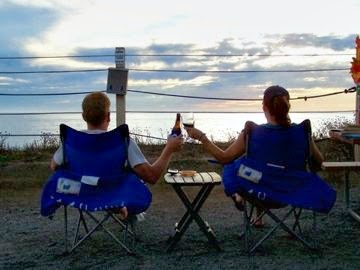 Our other crew members:

And the late, great Cleo who spent 1 1/2 years traveling with us and sadly passed away in March 2014 in Hot Springs, Arkansas… We were very blessed to have met up with Chris and Cherie of Technomadia while traveling through South Dakota in 2013. While there, they interviewed us for their Ramblings: Tales From Nomads series which is an GREAT way to familiarize yourself with the many faces and stories of other full-timers. They provide inspiration and tips for starting on your own adventure. Many of the nomads interviewed have found ways to make money on the road to either support themselves fully or supplement their retirement income. You can view our interview here and please do leave a comment for Technomadia so they can continue to provide these excellent videos to the public.

We love to see your comments and try to respond to everyone. If you have further questions on how we started and/or the specifics of our situation please feel free to message us at bonelliandcompany@gmail.com or through our Facebook page.

I found your site while watching a few of the Wynn’s videos. Now I might be following you guys as well. Anyway it’s early in that journey but I really would like to know how the Wynn’s other cat is doing? It was a great episode watching all of your rescues and sad to see them leave the two behind. I heard about the eldest pet’s passing but the younger Bengal type cat I would like to know about. Take care and happy journeys.

Hi Dennis! Thanks for stopping by and asking about Singa. He’s doing really well here and has made himself at home. So much so that he sleeps under the covers next to me every night. =) I try to post a video and photos of him every few days on Instagram (@talesfromthemutiny) since that seems to be where most of our (and his) fans like to hang out. I use the hashtag #singa and #singawynn so you can probably find all of his Instagram posts that way. =)

Just checked back and saw this response! No need to apologize! I mean it mostly doesn't matter much whether the stuff described in the posts happened yesterday or last year — they're still great to read, informative, and we're not trying to stalk you in real life. 😉 I was just curious. Thanks for being one of the couples inspiring us to contemplate a life on the road!

Well, it all started when we first hit the road and thought we could survive off of RV park and coffee shop wifi. We spent our first year without a personal hot spot. Big mistake. It was impossible to keep up with blogging and we struggled to even plan routes. When we finally got our own hot spot I struggled with what to do with the blog…start where we were or try to "catch up". Since I really started the blog as a record of where we've been I decided to attempt the catch up method…which hasn't worked so well either. However, I am determined to do it in the next month or two. The goal is to be current as I know it's probably frustrating for those reading the blog. I guess I just don't know how else to do it. We've been some great places I REALLY want to blog about and it would seem a shame to skip ahead.

I really appreciate you guys reading and commenting on the blog. Getting comments like this really inspire me to get my butt in gear and get up to date. I think things will flow much better. If by chance you're curious about what we are currently doing check out Instagram (@talesfromthemutiny) or our Facebook page. Thanks so much!!

My wife and I love your blog — curious, why is it you seem to post about a year after the event you're describing? I just noticed the discrepancy between the blog post dates and "date visited."

Finally catching up on my blogs. Great post, very much from the heart. Hope you two have a wonderful 2015! Until we meet again!

I admire your spunk and creativity…not everyone is brave enough to follow their dreams….

Nice story. I have been following your Facebook posts for quite some time now. Ever since seeing your "Ramblings" episode on Technomadia. I don't comment much but know that I enjoy reading about your adventures. My wife and I treated our 5 children to vacations in our 40 foot Class A Safari for years. Up and down the east coast from Maine to the Keys. Built some wonderful memories. Now, our youngest is heading off to college in the Fall, so our time to hit the road full time is getting closer! Can't wait! Thank you for sharing your life on the road, it keeps many people like myself inspired and sane! Safe travels.