Just “Kidding” Around at Mutiny Ranch 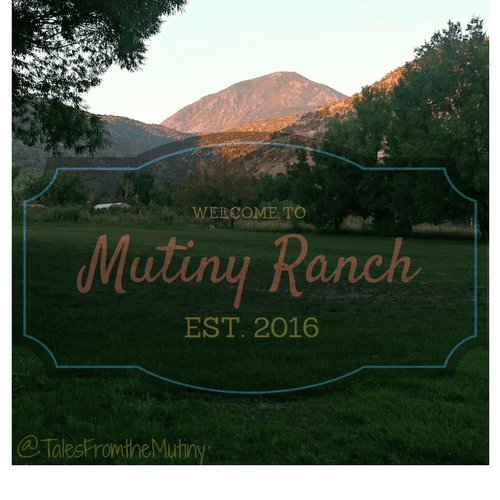 Hey there! Long time no post. If you’re new to Tales From the Mutiny…Welcome! Velkommen! Bienvenue! Kalós órises! Hello! If you’re not new you might notice something different…the website and theme! After 4 years of being nagged…I mean encouraged… by some fellow bloggers I finally made the switch to wordpress. So, please bear (bare?) with me as I learn all the things, all over again.

We’ve officially been on the farm (and off the road) a full year and our menagerie has grown. Here’s our current head count:

Wild asparagus grows along many fences in our canyon. Maybe relics from old farmlands.

I have to admit, there are days I look around and wonder how did this happen?? But more often than not I look around and say how did we get so lucky? Yes, the days are filled with feeding the chickens, cleaning the stall, collecting eggs, mixing feed, spreading straw, hauling hay, squashing squash bug and getting drenched with the sprinkler so we can water our little garden. A far cry from our nomadic days when we’d wake to a leisurely morning of coffee and discussion of whether we wanted to hike in this beautiful place or that one. But to me, our new farm adventure equates to a life of connection, an appreciation of where our food comes from (and the true cost of food), love of the land and soil and lady bugs and bees, the splendor of finding that first shoot of wild asparagus popping up along the fence and the joy in spying the first tiny cucumber developing on the vine that’s growing from the seed I planted. I sweat. I get dirty and sun burnt. I get mosquito bites and the bejeezus scared out of me every time a snake slithers through the garden. But we love it…this network of life that makes up our soil is spreading through our veins.

Like our RVing days, we jumped into this farming/ranching thing with both (or all 4) feet…totally green and with just a tiny bit of research. We planned on taking a year to travel through Colorado to find our forever home and ended up going no further than our first stop and moving into our place in less than 2 months. Our garden developed in much the same way. I found a local(ish) seed source (Botanical Interests), liked the pretty pictures on the packages, planted some seeds and hoped for the best. Okay, I did attend a two day Permaculture Convergence and proceeded to read every permaculture book in our local library but still…not a lot of proper planning went into this year’s garden. In the past month I’ve started a part-time internship at a market farm a mile from our place. This gives me the opportunity to gain hands on experience with farming in a setting almost identical to ours (with vegetables that actually grow). Lemme tell ya, next year there will be some big changes in our garden.

And now monsoon season is here and it’s fantastic! Last year we had very little rain and didn’t really know what to expect. I had heard that June is the hottest month and thought these people are crazy. But I see it now. With these afternoon thunderstorms come the cool breezes and more moderate temperatures. Goes to show me (another lesson learned)! So much to learn about the land, weather cycles, growing season and finicky-ness of high desert farming. You see, even though we’re in Colorado and our property sits at 5500 feet we’re also in the desert, surrounded by the sage brush, junipers and red rocks of the Colorado Plateau.

But the most magical thing that’s happened so far this year has been the birth of our two bucklings, Buster and Ewan. When we purchased Dot, our pygmy goat, we had zero intentions of having babies (as a matter of fact, we were really hoping to get a wether, or neutered male goat). The seller had said two of her other goats had recently given birth unexpectedly (apparently she only planned on breeding two of her 5 does). So, when I asked if Dot might be pregnant she grabbed her by the udder, felt around a bit and said, “hmm, possibly…oh well”, or something along those lines. Now remember, neither Clark nor I had ever had goats before (he spent summers at a dude ranch as a kid and I worked at riding stables growing up but no goats). We were simply getting a goat because our newly acquired minihorse was lonely and needed a “herd”. 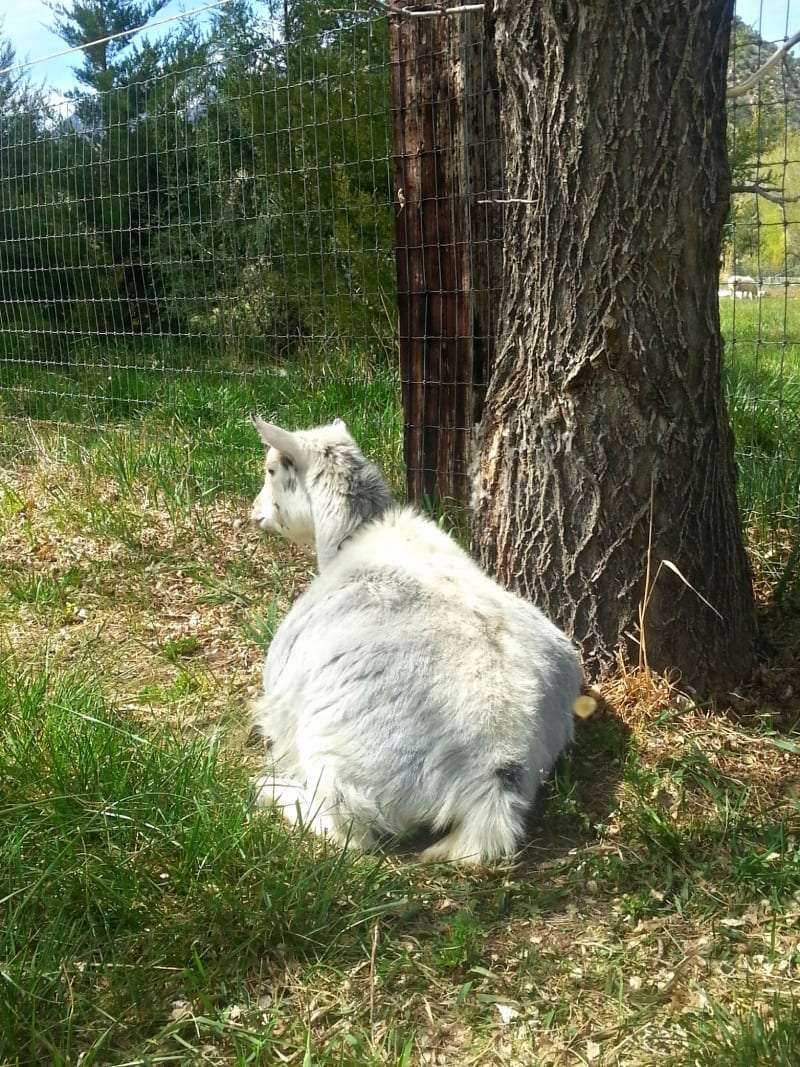 As the weeks passed we noticed Dot’s udder was getting fuller and fuller…as was her belly. But we really didn’t want to get our hopes up of having a cute, fuzzy baby goat. Clark read a ton of blogs about goats and what stuck with us the most was the saying if you think your goat is pregnant she probably isn’t. Goats are ruminants so they kinda bloat up when they graze and then they regurgitate the grasses later to (re)eat it. You can bring them in from the pasture in the evening and they look pregnant but by morning, when you let them back out, they look half-starved. Well, Dot never really looked half-starved so we decided to prepare ourselves the best way we knew how…by reading more blogs.

We copied a list of items one needs to have on hand to help deliver kids and I set off to the feed store. I loaded up on wee-wee pads, liquid vitamins, syringes to administer the vitamins (via mouth), iodine, betadine, surgical gloves, KY jelly (for the goat, I swear), vetrap, bandage scissors, high quality goat feed, high quality goat vitamins, high quality salt granules made for goats (with extra copper) and few other odds and ends. In my mind I knew what would happen…we’d have all these things “the list” told us to get but with no idea how exactly to use them. It’s like when you watch a movie and a woman goes into labor and someone yells “boil some water and bring me all the clean towels you can find” but you never see what exactly they use the hot water and 28 towels for. And that’s pretty much what happened… 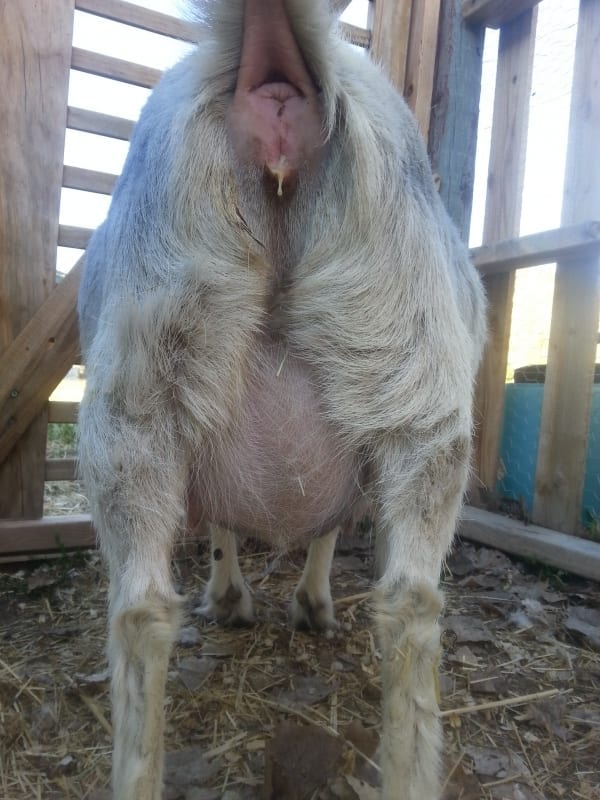 Taken less than 24 hours before she delivered. Hey, if I had to look so do you.

For about two weeks I followed Dot around staring at her lady bits looking for any signs of change. Between online images and my new found, real life goat voyeurism I felt a little…odd. I’ve never in my life seen so many goat v-jay-jays. I must have a dozen photos of poor Dots behind in my phone. I expect a PETA anti-animal porn raid any day now and all the evidence will be right here on my hard drive. I’ve also never fondled a goat udder (or any udder really) as much as I have Dot’s. There were days I’d wake up and just feel like this was the day. I’d run (okay, hobble) to the barn and look around like a kid on Christmas morning for a tiny nose and soft braying from a newly born goaty. But that’s not how it happened. Instead, I worried every time I left the ranch. I worried every time I went to sleep. Dot had never had babies and we had never delivered goat babies so I worried. The blogs talked about all the things that could go wrong and even though I had the bag full of birthing items from “the list” I still worried. And then…

One Saturday morning (May 6) I went to the barn and checked on Dot. She was restless and kept laying down and getting up and looking uncomfortable. Clark was up early mowing the pasture so I told him if he saw me running toward him waving my arms like a lunatic it meant the baby was coming. I sat in the stall with Dot and she laid her head on me. After a few minutes she was up again and I saw the discharge from her lady bits. A split second later she yelled out and her water broke. Dot was never a vocal goat so to hear her cry out wrenched my heart. I managed to run out of the stall and flail my arms like a lunatic…but Clark was mowing away from me on the top part of the pasture. He couldn’t hear or see me at all. So there I was, screaming Clark’s name, running with a limp, waving my arms like a fool and Clark’s just happily trucking along away from me. It took an eternity before he finally turned the mower and I caught his eye. I dashed back to be with Dot. 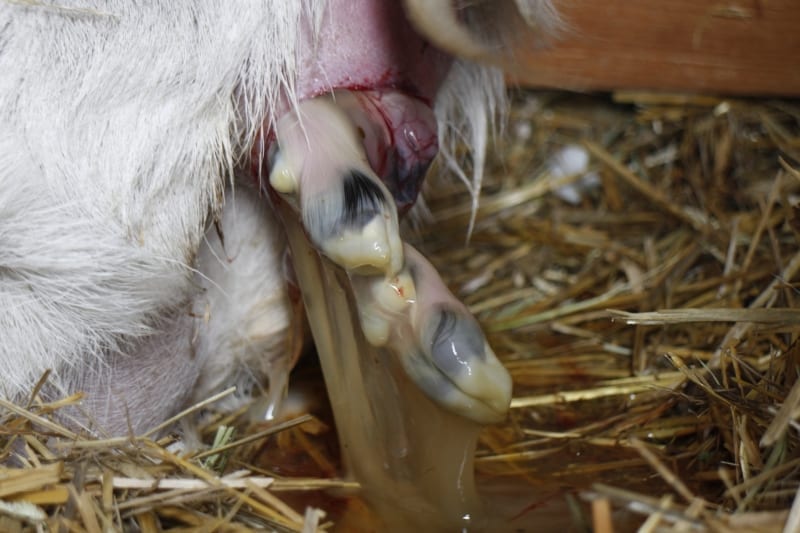 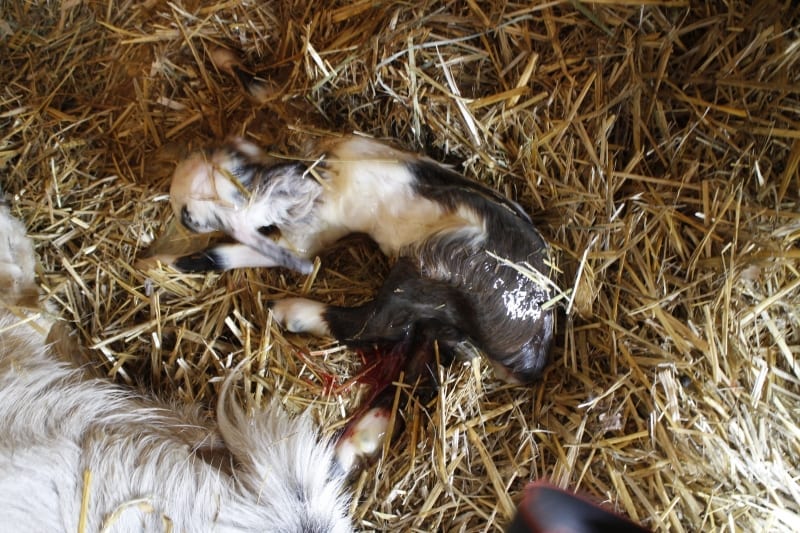 Buster fresh out of the womb.

There was a lot of screaming and crying (from both Dot and me). Fluids were leaking everywhere and there was nothing I could do but wait. When Clark arrived we saw the hooves emerge from Dot’s lady bits. Two perfectly tiny hooves and then a little nose. The baby was lined up just like the blogs said it should be. A wave of relief washed over me but I couldn’t help but get emotional every time Dot had a contraction and yelled out. A few moments later and little Mr. Buster Brown was born. As Dot was cleaning him up she started having more contractions. A nose peeked out of her lady bits but no hooves. Clark calmly went into action and carefully inserted a finger and out popped the hooves. Soon Ewan was out and Dot was happily cleaning up both little boys. Within 30 minutes Dot delivered both babies and the placenta without any problems. The babies made their way to their feet and were suckling. We dipped their umbilical cords in iodine (the only thing we ended up needing from our “birthing kit”) and spent the rest of the day cuddling them. 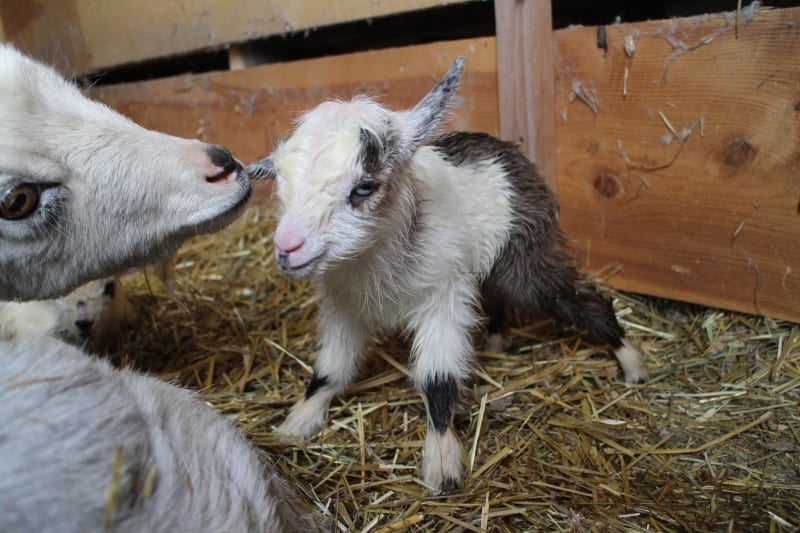 Dot has been the best. Like, she totally deserve a coffee cup that says “World’s Greatest Mom”. Apparently, bucklings are very needy and often require more milk than a momma can give (so we’ve been told). We had already feared she wouldn’t nurse two babies and were prepared to bottle feed one or both if needed. But she never missed a beat…and these boys are chubby fellows. 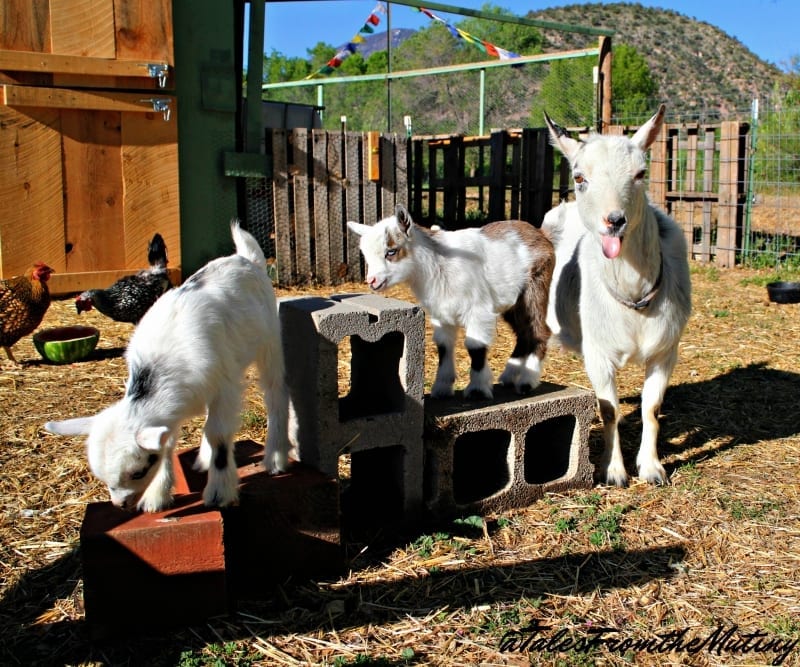 Dot with her babies (at one week old).

Buster and Ewan are 12 weeks old now and, while they are still cute, they’re into everything. One major project we will be tackling soon (we hope) is to do some cross fencing. As it is right now, when we let them out to graze the pasture they actually have access to the entire property…including the stairs to front door, the stairs to the back door, the Jeep, the wood shop, the flower beds, the patio furniture, etc. Oh the joys of goat babies! 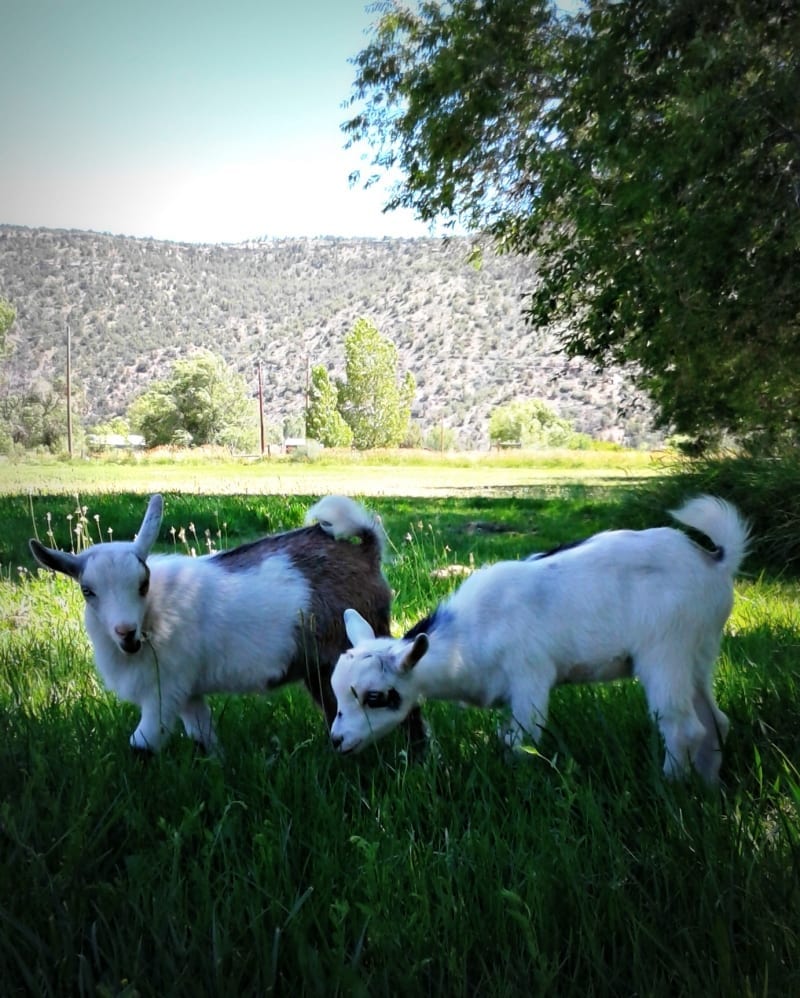 They’re growing so fast! Buster Brown (left, in his fancy brown pants) and Ewan (right, who resembles mom so much). 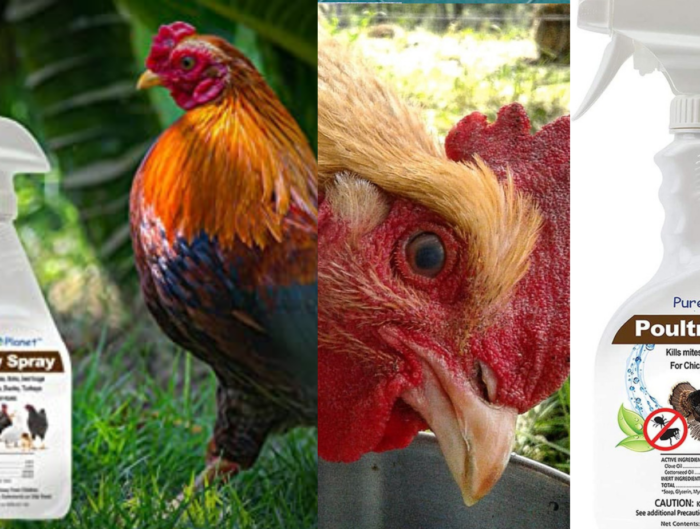 Learning How to Close the Loop – Tales From the Mutiny Reply

[…] and a goat who then birthed 2 more goats. We witnessed those births (you can read about it here) which was a first for me. It was all the things you here…magical, life changing, beautiful. […]