Sometimes it pays to think outside the box…especially when you find yourself in overly crowded places and you remember your house has wheels, and an engine. Everyone in the world (okay, maybe a slight exaggeration) knows about the beauty and splendor of Zion and Arches–and I don’t want to diminish those facts–but it’s also a fact that, like Yellowstone or Yosemite, if you don’t plan it right your trip to these spots may involve long lines, crowded trails and lots of photo bombs from strangers. Of course, if you’re limited to when you can go you just might have to suck it up and deal with visiting the most popular parks during the most popular times of the year…and that’s okay (some people even thrive in crowds). But, you could also decide to visit some lesser known, but equally amazing places instead.

We’ve mentioned Grand Staircase-Escalante National Monument quite a few times in our last few posts. Part of the reason is that it’s so huge that we kept bumping into it as we traveled both Highway 89 and Highway 12. And part of it is because we really were impressed, not only with how utterly amazing the colors and textures were but also that we practically had the place to ourselves. After leaving Kodachrome State Park we once again we found ourselves in Grand Staircase. This time we were in the town of Escalante itself.

It turned out our Jeep, Chuck Norris, had developed a rotational, high-pitched squeal from his undercarriage. We inspected the drive-line, as best we could, for mud and dust and lubed what was lubeable…we’d been off-roading quite a bit…yet the noise persisted. With limited cell and wifi we struggled to search for information on what might be going on and the severity of the issue. A stop at the BLM office in Cannonville led us to a repair facility, Cottam’s Phillip 66, in Escalante. Turns out this is where the BLM brings their vehicle for service and repairs so we felt that we were in good hands.

Chuck needed a couple of u-joints and a center link, all of which had to be ordered. We decided to camp a few miles out of town on Hole-in-the-Rock Road which was not only free, but had fantastic views and just enough cell signal receive a phone call once our parts arrived (be sure to get your free permit at the BLM office). Unfortunately, since there was the possibility that the drive-line could seize (or some other vehicle stranding condition could occur) we decided to keep our adventures a little more close to home. (Additional link for the BLM land where we camped click here).

Hole-in-the-Rock Road is 62 miles long (one way) and ends at a point above Lake Powell in the Glen Canyon NRA. Originally part of an 1878 Mormon Expedition, the pioneers made their way down Hole-in-the-Rock trail only to be faced with the vertical cliffs of Glen Canyon and, undoubtedly, their failure to reach the the San Juan River to set up a new community in Bluff. But their tenacity and brilliant engineering proved otherwise. By blasting, digging and rigging up ropes the group managed to create a hole in the rock and lower all 83 wagons, the livestock, women and children safely down the 1800 foot cliff. There are so many points of interest along the road but we didn’t feel confident taking Chuck too far from our base camp.

We did, however, go as far as Zebra Slots.

Zebra Slots are located 5 miles down Hole-in-the-Rock Road. Parking can be found directly after the second cattle guard crossing. The trail begins across the road, through the rabbit brush and then drops into a canyon and continues for a total of about 2 miles until you hit Harris Wash. Finding the exact wash that leads to Zebra Slots can be tricky as you’ll be crossing into Harris Wash…a huge, deep sandy wash that eats footprints and obscures any semblance of a “trail”. At Harris Wash you’ll turn upstream (it was dry when we were there but that meant a left for us) and then the next confluence (no more than 1/4 mile) on the right (north) will lead you to the slots.

This slot is short lived but remarkable due to the stripped pattern in the rocks that lend to it’s name. Embedded in this walls of the slot, and scattered on the wash floor, are what’s known as Moqui Marbles. We squeezed and climbed and thoroughly enjoyed this slot. We saw only one other couple who was looking for the slot while we sat eating lunch surrounded by Moqui Marbles. 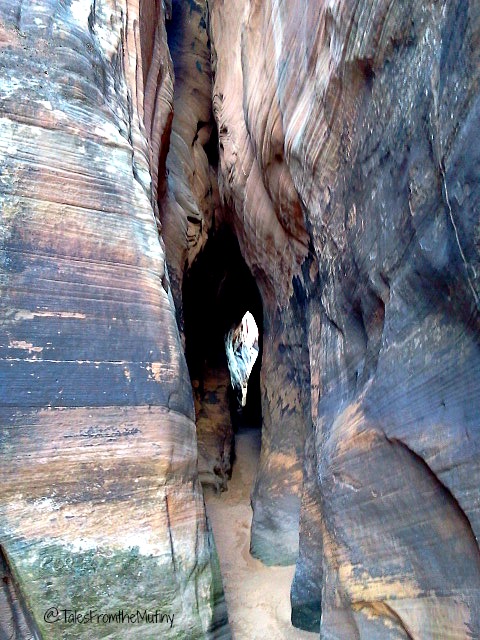 What started as a lovely day turned a little south when I persuaded Clark to continue on a loop hike I read about online that would take us to nearby Tunnel Slot (there is another, easier, way to get to Tunnel Slot so click at your own risk). What had once appeared to be very clear directions, from the comfort of our RV, now was a jumble of meaningless words as I looked at a landscape that appeared far different than what was being described in my notes. And, although I did finally make it to Tunnel Slot, Clark and I managed to get ourselves separated long enough to implement the “come find me technique” whereas I sit in one spot and blow my whistle until he shows up.

Although we were safe and our separation was short lived (neither of us was in any danger of being lost) it was still a reminder to stay together and to maintain verbal and visual contact since every twist and turn in a canyon can hinder both of those things. Should the person in the lead decide to turn into another wash others may not see you…and due to the deep sand they’ll never even see your foot prints. Another lesson learned.

Needless to say, the hike back out was more arduous than it was coming in…deep sand and a steady uphill climb was a bit draining after walking in the various washes. But it was still fantastic.

Oh, and we managed to get Chuck in for repairs before we headed off to our next destination…Capital Reef National Park. FYI: Cottam’s went above and beyond to get our problem diagnosed and parts ordered right away. We wouldn’t hesitate to recommend them and found their pricing to be more than fair. Kudos to the gentlemen at Cottam’s. Also, if you’re looking to grab a bite to eat out in Escalante we recommend Escalante Outfitters…a local shop where you can get fitting for hiking boots and pick up maps as well a nice up of coffee and some killer pizza. It’s a really great spot!

Note: Zebra and Tunnel Slots are rated as difficult because of the lack of trail markers once you reach Harris Wash. Hikers get lost all the time so map reading skills are imperative. Zebra Slot is often wet…sometimes with waist deep water. Be as prepared as possible by stopping in the BLM office and speaking with a Ranger. We didn’t find any hiking “flyers” on either slot and could only get specific information when we asked about those slots by name (they don’t advertise this two slots to the general public, instead sending most people to the “safer” Spooky and Peek-a-Boo Slots). Be sure to ask about road, weather, slot and trail conditions. Neither Zebra nor Tunnel are technical slots and should require any special equipment…it’s only the getting lost part that grants these slots the “difficult” rating.

Thanks for adding the link:) Also, check out Liveandlethike.com for Capitol Reef hikes. Andrew worked as an intern for several months and has an awesome blog with perfect directions and photos for every hike imaginable in the Capitol Reef area. We used his post for the Upper Muley Twist.

Those are some great moqui marbles and slots. that is such a great area.

Thanks so much! We didn't have any problem boondocking in our rig (32 feet plus the toad). There was plenty of room for even larger rigs where we were (I'll add the link in the blog). When we get back to Capital Reef we'll definitely check out Upper Muley Twist. We plan on revisiting the entire area many more times. P.S. We'll definitely check out you blog!!

Unfortunately we haven't made it back there…yet. But we intend to do so much more in the area when we do go again. It's our favorite area so far…just so many things to do and places to explore.

The slots are very cool!! Beautiful photos:) How was the boondocking out Hole in a Rock Road for 40 ft Class A?

Capitol Reef NP is my very favorite hiking park with some nice Jeep roads. If you want a fantastic hike try Upper Muley Twist! Check out our blog posts on the park.

Have you made it to Peek-a-boo and Spooky yet? They're my all-time favorites! Love the blog and all the pictures. Makes me miss Utah. Can't wait to go back. Thanks for sharing.