Going Off the Grid in Grand Staircase ~ {near} Kanab, Utah

Spring Break…a time so many students, family and businesses look forward to every year can be a thorn in the side of fulltimers as campgrounds, hiking trails and National Parks fill to capacity (sometimes overflowing) with those seeking a break from suburbia. If you read the previous couple of blog posts you’ll see a theme here. We failed to account for the fact that Spring Break encompasses several weeks of staggered schedules various school systems have these days. So, just because all the Easter eggs have been found and chocolate bunnies have been consumed it doesn’t mean it’s safe (or even feasible) to venture to certain {popular}areas of the country. And trust me, Zion National Park, is no exception. In all actuality, once Spring Break hits it’s open season at Zion…pretty much until winter.

We were traveling West on Highway 89 from Page, Arizona to Kanab, Utah, passing through the Paria area of Grand Staircase~Escalante National Monument. Grand Staircase is the first monument to be managed by the Bureau of Land Management rather than the National Parks Service and at 1.9 million acres, it’s a monumental task. It’s more remote, and far less visited, than it’s bordering NPS neighbors, Zion, Arches and Bryce, yet is made up of the same “staircase” that makes these other parks remarkable. And, it’s a fulltimers dream come true during the high-season.

Since it’s run by the BLM there are many boondocking opportunities, unlike most National Parks which only allow camping in developed campgrounds. But, being newbies to the whole “finding appropriate campsites we could fit in” we struggled for a while to find a suitable spot. We tried the gravel pit at the BLM contact station (too far from our destination) and the Paria Movie Set site (not big rig friendly unless you want to park along side Highway 89). We took a chance and headed up Johnson Canyon Road. As daylight was fading we were hitting a brick wall. In an act of desperation we disconnected the Jeep and we scouted an almost invisible dirt road we’d passed earlier. The scrub on the sides of the road was overgrown enough to touch the sides of the Jeep but it opened up to the most beautiful camping spot we’d ever seen. And no one else was there. We knew taking the Mutiny down this road would result in some new “pinstripes” but we felt the campsite was worth it. And it was.

The one and only problem with the area we were camping was that we had absolutely no cell signal (not AT&T or Verizon) but that was hardly a reason for us to move. Instead, we welcomed the break from the time suck that social media has become. Of course, it did make finding places to hike more difficult but we had picked up some information at the Paria Contact Station and did take a drive into Kanab to use some wifi and managed to find a hike that alleviated any lingering regrets we might have had in skipping Antelope Canyon. 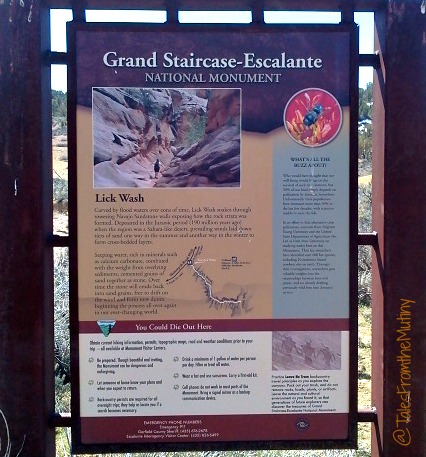 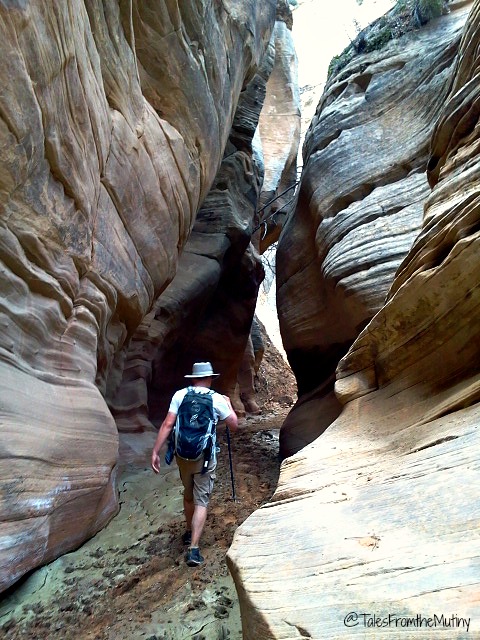 Lick Wash is a fairly easy slot hike suitable for most people who are comfortable hiking several miles (various sites report it’s 4.0 to 5.5 miles round trip) . It’s also an out-and-back, meaning you can turn around at any point. And, the slot narrows fairly quickly so you don’t have to hike too far to get maximum enjoyment. While we were here we passed a few people on their way out of the slot. Then we had the whole place to ourselves. It was pretty magical… 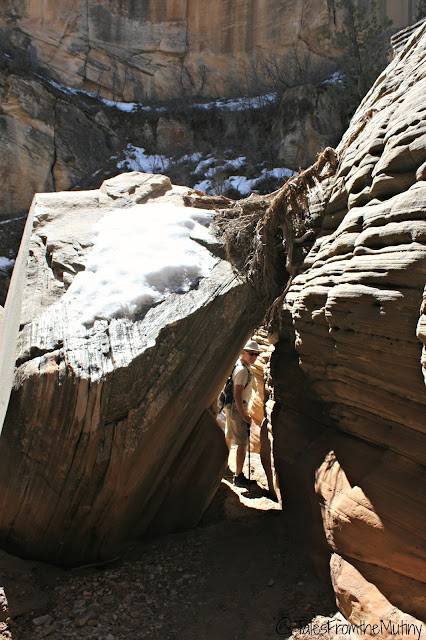 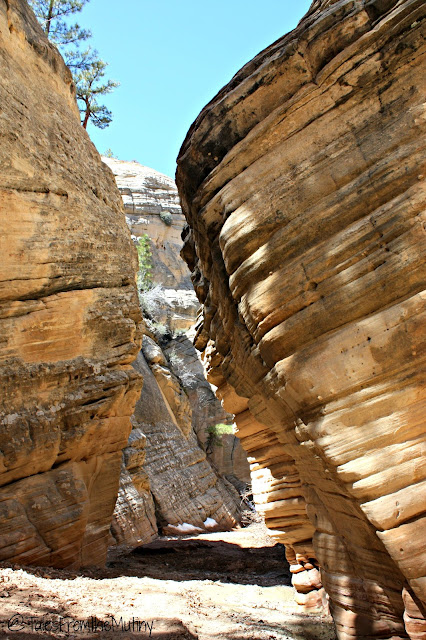 We read about several more slots and were eager to check them out but discovered they’d be easier to get to once we made it to the north side of the park (the access from Highway 22). Luckily, our campsite had plenty of hiking, rock scrambling and adventure without having to drive anywhere. Every single day I got up and explored the many different textures, colors, washes and mountains. Every morning I hiked to one of the washes and looked at the “highway system” of rabbit, rodent, lizard, coyote and insect tracks left behind. These are some very busy night critters.

Although I had hiked by this particular wall several times, it wasn’t until we did a late afternoon hike that I was able to see these petroglyphs. They were virtually invisible until the light hit them just right. These were literally less than 1/4 mile from our front door…unmarked, no real trail to guide you there. How freakin’ amazing! 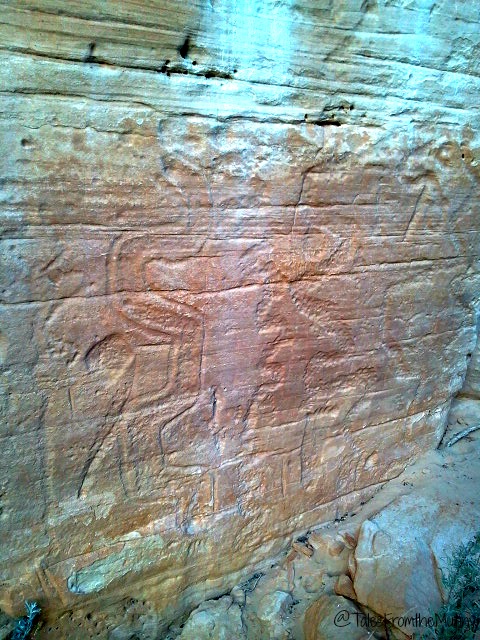 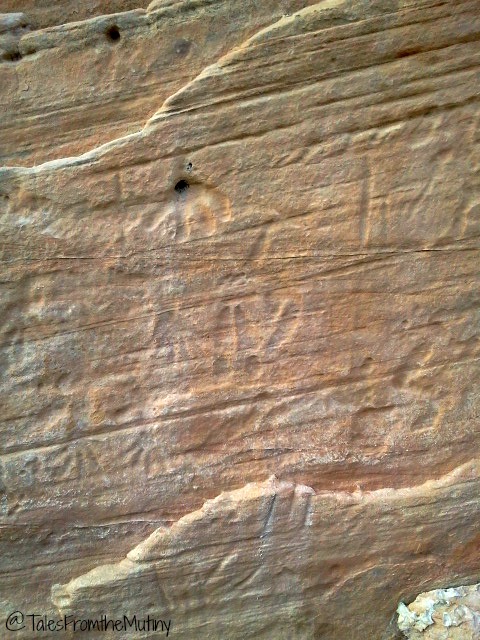 Our week unplugged really helped us overcome some of the disappointment we had been feeling as we ventured through some of the most popular areas in the Southwest. We never saw another person anywhere near our campsite or in the many acres surrounding us. Nights were dark and silent and days were relaxing and peaceful. A perfect way to spend part of Spring Break

Next up: Kanab, Best Friends Animal Sanctuary, a HWY 89 dream and a big Zion FAIL that leads to the discovery of something even better.

We agree, Paria Townsite is gorgeous. Would have loved to boondock there but I don't think our rig could handle it…Southern Utah is the first place we intend to revisit to spend more time. There's just nothing else like it!

We drove over to check out the Paria townsite and movie set from Lake Powell. We were totally blown away by the colors as we rounded that first bend! Just amazingly beautiful. We actually did a second drive down for another look after we finished the Upper Buckskin Gulch.

Looks like the perfect spot for Spring Break relief. We spent Easter weekend and the week after in Bluff, Utah. We knew it wouldn't be crowded at all. The perfect spot:)