As we traveled through Southern Utah on Scenic Byway 12 it became clear that this road had earned a spot on our Top 3 List (the other 2 would be Highway 395 through the Eastern Sierras and the Million Dollar Highway in South Western Colorado~but don’t take your big rig on it). Before we had even started fulltiming Clark was pretty sure he was an “East Coast Person”…specifically well south of the Mason Dixon Line. But as we traveled through the color spectrum of rocks that Utah has to offer he quickly realized the West was where it’s at. {Thank Gawd, as a child I lived in several parts of the South and it’s just not for me}.

We made our way from Escalante to Capital Reef National Park (I bet some people haven’t even heard of this place) and sat slack-jawed at the scenery passing through our front windshield. The colors and textures set against vast blue skies made us shout WOW! and Look at That! many times. 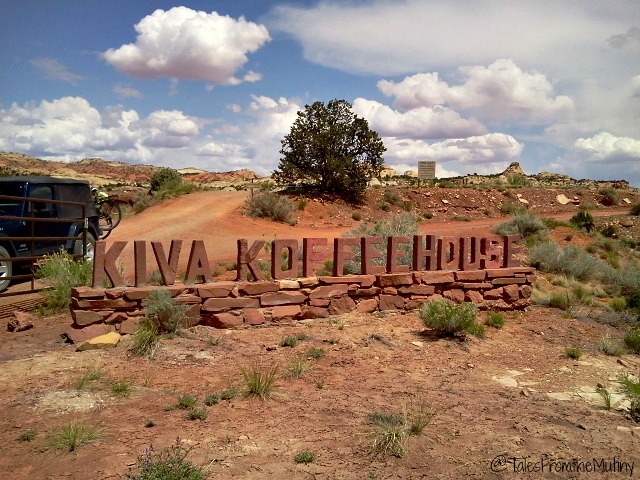 We made a quick stop at Kiva Koffeehouse, a uniquely situated spot right along Highway 12 which offers plenty of room for the RV (with the toad) on the upper parking lot. The koffee shop is a beautiful piece of architecture in it’s own right but I still don’t think, even with it’s massive tree trunk supports, it compares with the views. The coffee was excellent and the staff super friendly. I highly suggest stopping in even if you aren’t a coffee drinker…they offer homemade soups, sandwiches, cold drinks and even a Kiva Kottage for those traveling without their rig.

We boondocked about 5 miles from the entrance to Capital Reef National Park and stayed for 5 days. Since we spent almost all of our time exploring the park we weren’t bothered by the fact that there were other campers near us but there appears to be one or tow other options nearby. Check out this page on Campendium for details. 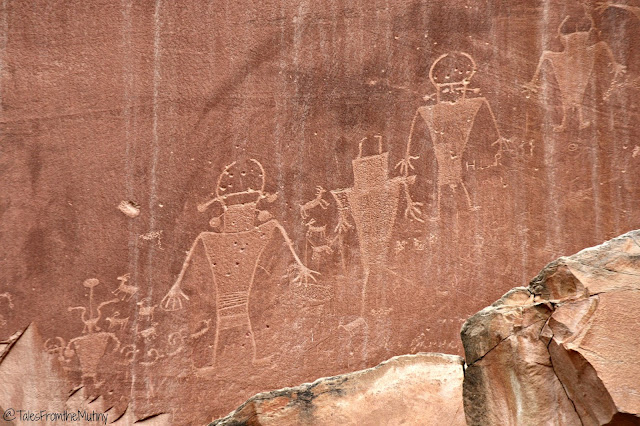 Capital Reef has a lot going on…from the many colorful shades of rocks to ancient pictographs and petroglyphs to an old Mormon settlement complete with an old schoolhouse and orchards that still produce fruit. During harvest time visitors are allowed to pick fruit for a nominal fee. The area is awe-inspiring and you’ll seriously wonder how it is everyone talks about Yellowstone but anyone has even heard of Capital Reef (or so it seems).

But one of the most impressive parts of Capital Reef is the Waterpocket Fold. At 65 million years old, this geological wrinkle is 100 miles long and commands your attention. To get to the Strike Valley Overlook (where the photos below were taken) we drove the Notom-Bullfrog Road from our boondocking spot, all the way to the Burr Trail Swithcbacks, through part of Grand Staircase-Escalante National Monument and Anasazi State Park and then north onto Highway 12 through the Dixie National Forest. It was amazing. It was also something like 130 miles.

You won’t get bored in this park. There are hiking trails, driving loops, backpacking opportunities, rock climbing, horseback riding and biking trails. You can search for arches or, if the season is right, pick peaches.

The campground inside the park does seem to fill up fast but there are also boondocking opportunities nearby, as well as at least one RV park with full hookups. You can also get water and the dump station for $7 (price was when visited in late spring 2015). When we drove the Burr Trail Road we noted several fantastic boondocking spots along the road…most with impressive views…however there was no cell service on out AT&T or Verizon carriers. But, if that doesn’t matter to you I would highly recommend checking out that area. You’re technically inside Grand Staircase and where there are plenty of hiking trails and easier access to the Strike Valley Overlook and Muley Twist Canyon. There’s also a unique little Natural Foods Store in Boulder (where Burr Trail Road meets Highway 12).

There are a few ghost towns east of Capital Reef (which also leads to the wonderful hiker’s paradise of Robber’s Roost). We took a day trip just for fun and stopped at this gas station/convenience store. While the gas pumps are your traditional style set up, the store was pretty cool…since it’s inside the mountain. They offer a great selection of local books including trail guides. 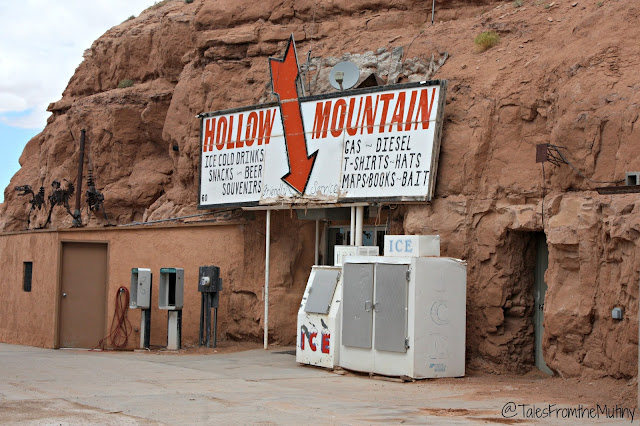 Capital Reef, and the nearby Robber Roost, are two places we can honestly picture ourselves returning to many times over. If you’ve been discouraged by the crowds at Zion, Arches and Grand Canyon, you’ll likely find yourself pleasantly surprised not only by the lack of crowds (for the most part) but also by the epicness and beauty of this area.

Wow! That looks amazing! Thank you for all the great information on the boondocking locations and the delicious sounding coffee shop. We'll definitely be going there once we hit the road!

We love Capitol Reef!! We come for a few weeks every year. As a matter of fact we are here right now. Arrived last Thursday. It is a hikers paradise!! We have covered most of the trails. There is a great hike right from where you boondocked. You hike up on Cook's Mesa (the first ledge) which has some beautiful pieces of petrified wood. You take this mesa to a canyon and hike (scramble) up a rocky trail to Meeks Mesa at the top. Great place to wander and see amazing views.