Our next stop in Wisconsin was prompted once again by author Neil Gaiman turning this into a Read Tripping adventure! If you’ll remember (or just click here and read) we stopped in Chattanooga and Rock City, which was where the climax of the story American Gods unfolded. Well, a pivotal moment in the book also occurred in Wisconsin, specifically House on the Rock. 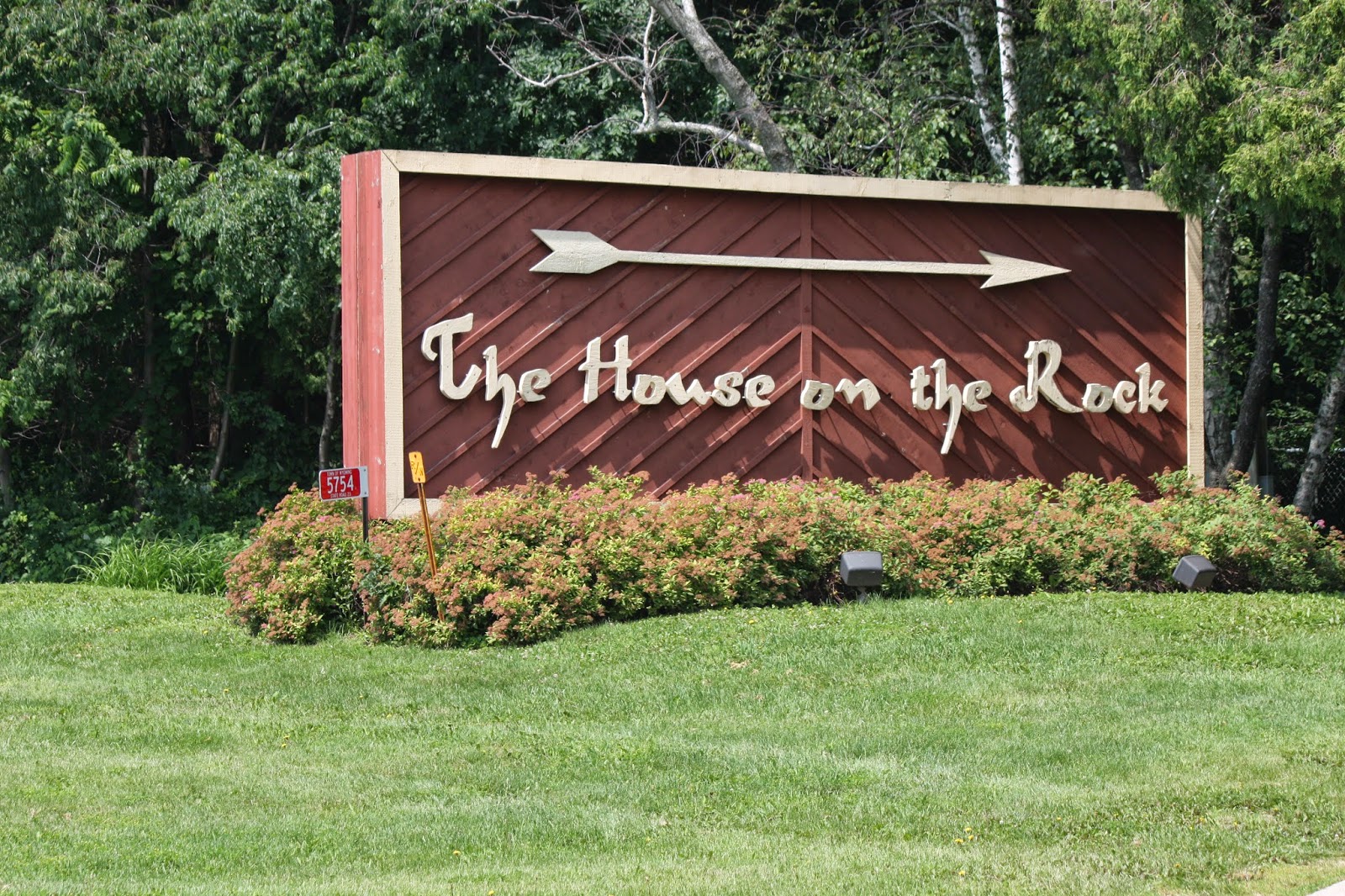 Now, even if you aren’t an avid reader or Neil Gaiman fan {as if that’s possible…get one of his books STAT} I can assure you that House on the Rock is a Bucket List worthy item. It seems like it’s out in the middle of nowhere because…well, it’s out in the middle of nowhere. But, with a little research and pre-planning or just sheer luck and getting lost (we like to call those “accidental adventures”~a term coined by my wonderful friend Coleen) you can find several cool things to do while in the area. That is, if House on the Rock isn’t reason enough on it’s own (it is).

First, let me tell you where we stayed. It was the little town of Avoca, Wisconsin. This was perhaps the least charming small town we had been in since hitting these small mid-western towns. But once again, we allowed our Passport America directory to dictate where we would camp. Had we been aware of the wonderful website Allstays we probably would have found a closer campground (there are State Parks much closer to House on the Rock). 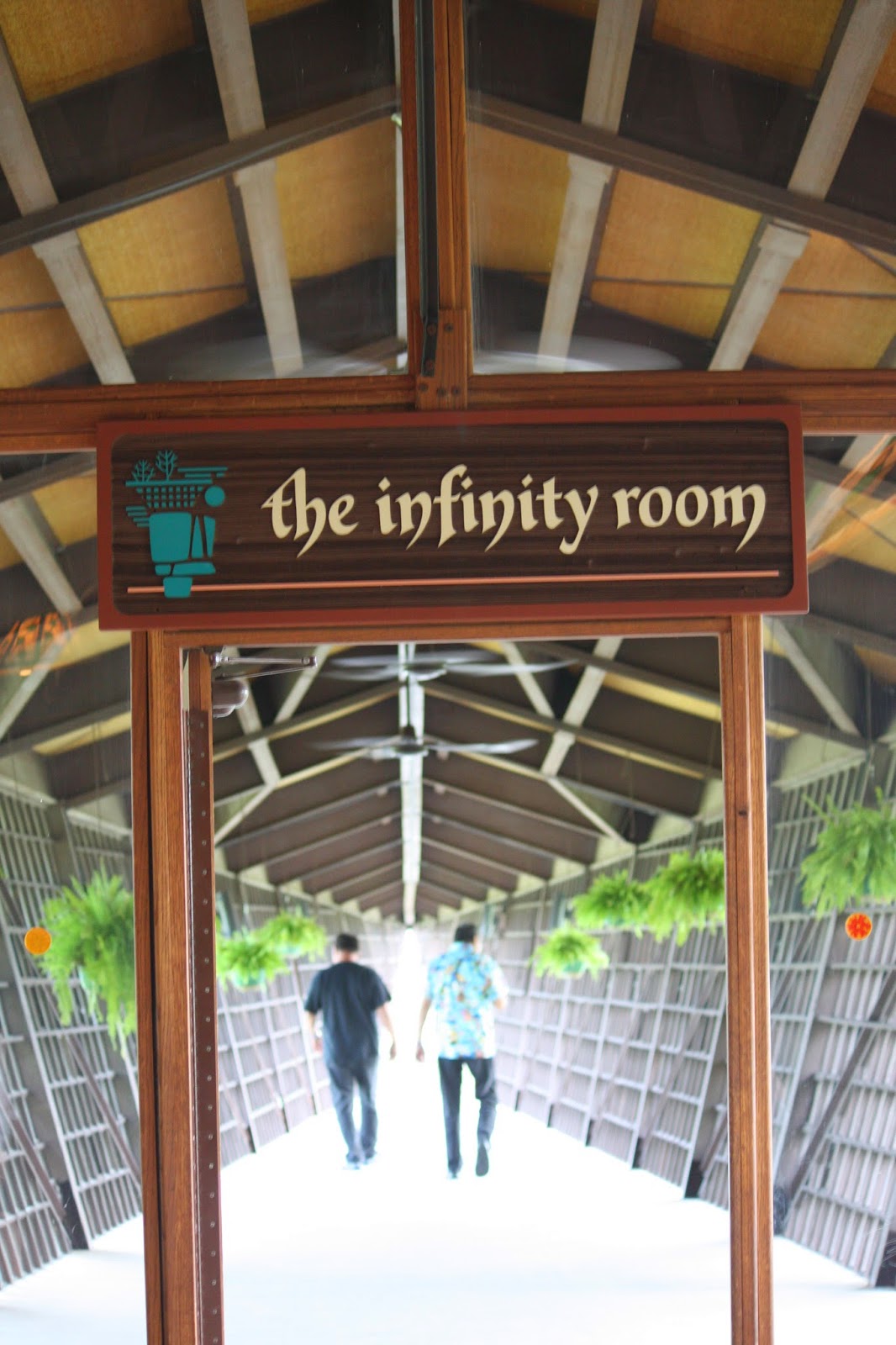 The good news was it was cheap ($12 per night), our site was huge and we got satellite. The bad news was the showers were substandard and coin operated, there is a large permanent residency there and it seemed a little too horror movie-ish to walk by myself to the poorly lit showers while “Ennis” was revving up his chainsaw 15 feet away. It was about 35 minutes drive to the House on the Rock, which isn’t bad, but if we go again we’ll definitely look into somewhere closer.

House on the Rock…how can I possibly explain the magnificence of this place?? Words fail me. It is, by far, the most confusing and intriguing places we’ve ever seen. You get to glimpse into the mind of creator Alex Jordan as you tour the house he built around a rock formation (his goal was to build the house without disturbing nature) but then things go from bizarre to “madness”. The man began to amass huge collections of carousel animals, doll houses, circus miniatures, automatic music machines (some life sized!!), the World’s Largest Carousel with 269 hand carved animals, and a sea monster larger than the Statue of Liberty just to name a few.

While tickets may seem a little pricey ($28.50 for adults and $15.50 for children 4-17) for a place that doesn’t offer any rides, we both think it’s worth it. We saw the whole thing in one day but you can break it up over the course of 2 days if you choose. It can be quite overwhelming. 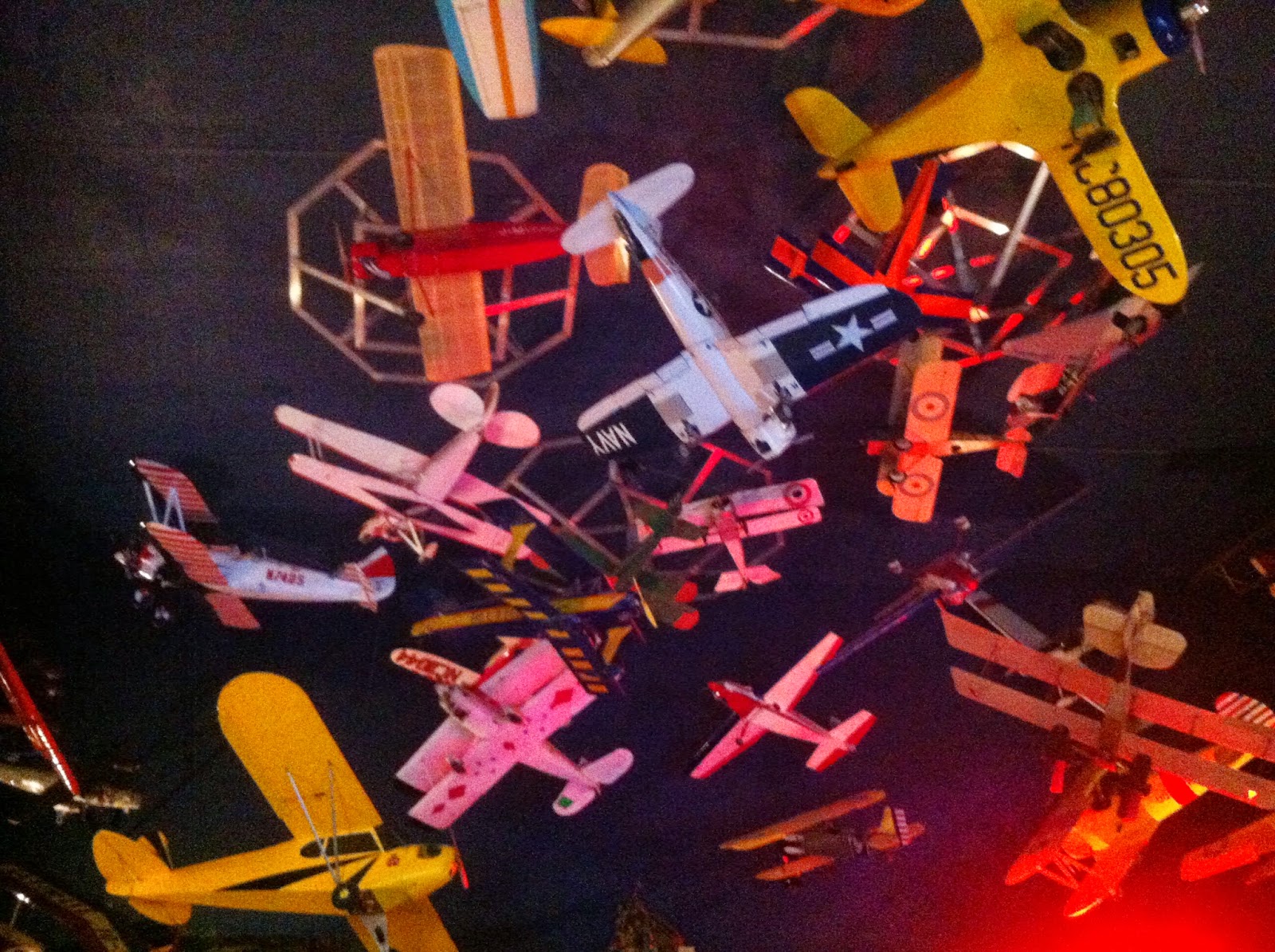 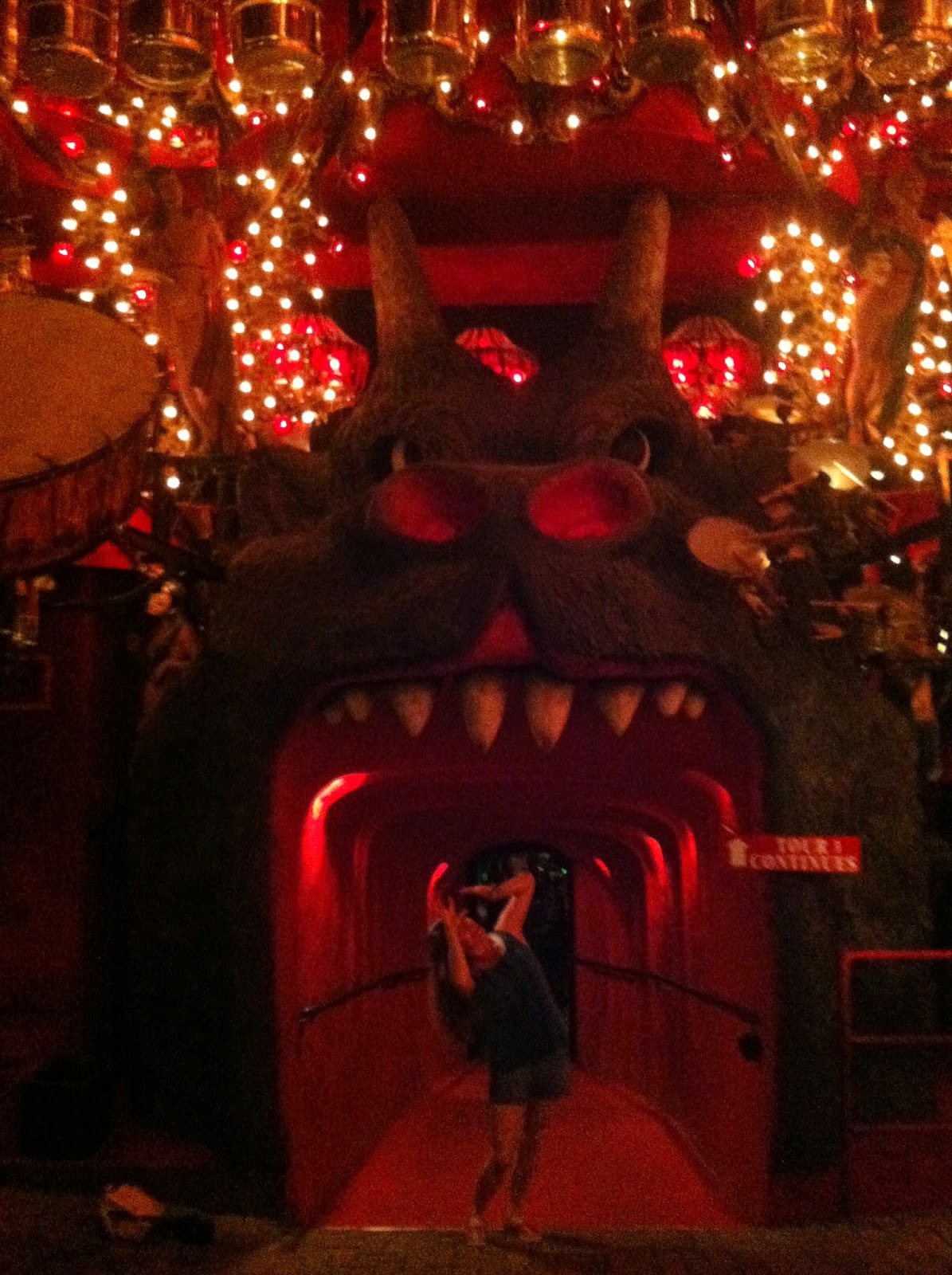 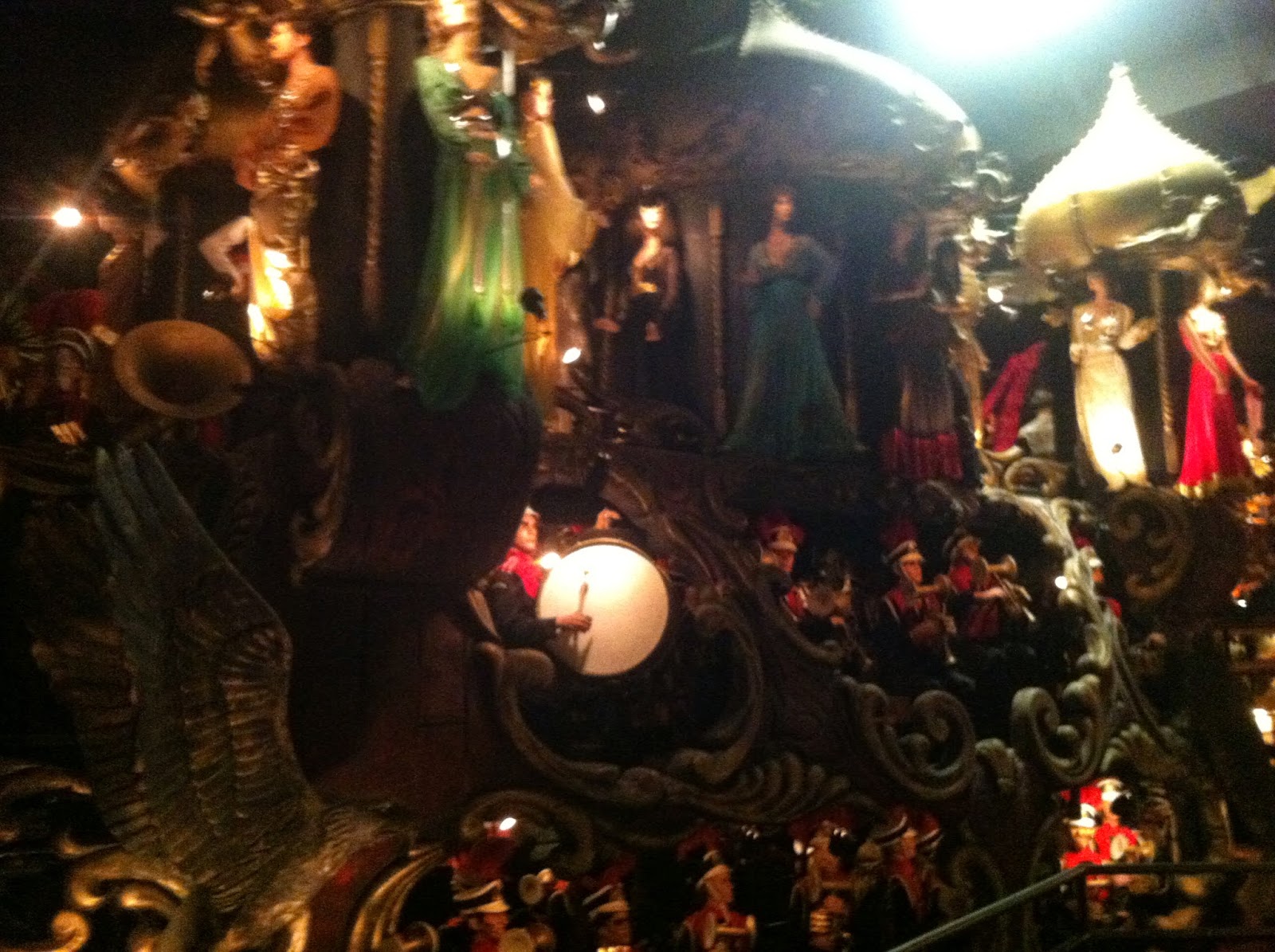 House on the Rock also has a resort located down the road with a golf course, restaurant, hotel and spa which offers package deals that include the house tour. And down the road in Dodgeville you’ll find the Don Q Inn. You’ll know you’re there when you see the huge airplane parked out front (it used to belong to Farah Fawcett).

Even if you don’t spend the night in one of their themed fantasy suites (one has a giant hot air balloon suspended bed and another looks like a church steeple) go and check out their lobby. Sixteen old barber shop chairs surround a massive circular fire place and off to the side you’ll find a “hidden tunnel” which will take you to Sam & Maddie’s bar and restaurant next door.

Nearby is Frank Lloyd Wright’s Taliesin where you can tour Wright’s house and studio. There are conflicting stories about Wright employing or training Jordan but there is no doubt that Jordan was influenced by the master architect as you see when touring the House on the Rock.

It’s truly a unique place to stop and visit. One of the most interesting features about House on the Rock is that the buildings that house all of these collections are virtually impossible to see from the road. It’s like a clown car really, you enter through a small door into a vast unknown wondering how in the hell everything can fit inside.

I hope you find this area as cool as we did. If not, well…I guess we’ll have to accept that we have weird tastes in sight-seeing destinations, or that you’re just boring. Haha.

For more (professional) pictures and the story behind House on the Rock please visit Roadtrippers.com.

Door County: Cherry Strudel, Shakespeare and Goats on the Roof
June 8, 2014
Giraffes, Sidecars and Open Bars in Racine, Wisconsin
May 7, 2014
The Most Wonderful Delightful Camping Spot Ever {Strum, Wisconsin}
April 27, 2014

Awesome! I hope you have a lovely trip. It's great to find some hidden gems in the most unlikely places. Enjoy!!

My family and I got an Era Winnebago and we are planning to head out to Wisconsin after we see some family is Chicago! Thanks for this post! You have my family a few ideas!!!

If you walk to the end of the Infinity Room and jump up and down, the room starts swaying. I was at the House when I was little, and Dan and I went a few years ago. It just keeps growing. It is a 'hoarders' dream house!