Maybe yoga isn’t your thing and you’re wondering why you should even bother reading this post. Well, perhaps you’ll want to see how this ends:

397 Princess Street
Kingston, Ontario, Canada
Types of yoga classes offered:
Class(es) I took:
Instructor:
Price:
My foray into international yogahood now includes Canada. Actually, this was my first (and only) international yoga class. I know, it’s not as glamorous as India or Bali but crossing into Ontario from Upstate New York does require a passport these days AND since our instructor was French-Canadian it counts, right? My sister, Marylou, and I decided to take a day trip to Kingston for some shopping, vegan food and yoga. Marylou had picked out a Hot Yoga class…surely in an attempt to watch me struggle and possibly pass out so she could get a good laugh. I can’t fathom why else she would choose HOT yoga over say, Kripalu, and what will forever be known as the Yoga Class That Crushes the Soul.

Samatva Yoga is a pretty impressive establishment. They offer so many different forms and styles of yoga that I refused to list them all for fear of causing my readers to go all glassy-eyed before even getting to my witty description. They also offer so many different payment plans and add-ons that it would be helpful to have completed Calculus to understand it all (so much for all those years of saying “I’ll never need to know the tangent and binomial theorem in real life!”). Actually, it’s not that bad and the staff is pretty helpful…and anyway, we were there for one class so the drop-in rate was what worked for us.

Although we were early we were informed that our chosen class fills up quickly so we stood in line outside of the hot room waiting for the doors to open. I had a moment of panic when I realized that I had failed to use “real” deodorant that morning, instead opting to use my new ‘crystal stone’ in an attempt to use less chemicals on my body. As I dug through my bag searching for my back up stick of Secret my sister snatched it away claiming that I needed to allow my pores to be open so I could “detox”. It was obvious she had it out for me…not only wanting me to struggle and possibly pass out but also to reek of B.O. so that no one would want to help me.
When the door opened I couldn’t help but think of the jungles of Vietnam (at least as described in those war books I had read in the past). A wall of hot, wet, slightly pungent air blew the hair out of my face as I walked toward the room. I swear my feet were melting into the floor (was this radiant floor heat PLUS overhead heaters?). In my rush to save my feet (I was hoping from one foot to the other like like a kid on a hot sandy beach) I set up my yoga mat and sat in half lotus. It was shortly thereafter that I realized I was sitting directly what felt like a blowdryer set on high heat.
Our teacher, Frederique, was amazing. Lithe and strong and full of energy she looked refreshed even though she had JUST taught the hot yoga class immediately before ours…I was convinced she was one of Satan’s Brides (only in that the heat seemed to fuel her energy levels while us mere mortals were slowly dissolving onto our mats). Despite a strong French accent, Frederique’s instructions were clear and, if there were any language issues, her demonstration was spot on. If it hadn’t been for the stinging caused by the sweat in my eyes (and my fear of being yelled at in a class so large) I would have loved to have just sat there and watched her practice.
To say it was intense would be like saying the Great Lakes are just ponds or that Alaska gets a little chilly in winter. Not 10 minutes into class and 2 girls walked out. Seriously…and they were young…and appeared to be in shape. At the one hour mark I was starting to get a little nauseous, although I was trying hard to hide it. My heart was beating so hard it felt like it was on the outside of my shirt, possibly sweating as well. And the B.O.? Well, it was nonexistent since my armpits went from dry to waterfall in a matter of seconds.
But the real reason this was the class of a lifetime (AND soul crushing) was that about 30 seconds after I contemplated laying in the fetal position crying, the man next to me started crawling toward the door. Yes, you read that right…crawling…on all fours. At first I thought he was being polite, not wanting to walk in front of the class and block our view. But then Frederique noticed him and asked if he was alright. He managed to squeak out a faint “no”. Of course she rushed over to help him but it turned out that all she could do at the moment was open the door and wait for him to finish crawling through. The room went silent for a good full minute.
Eventually a regular student led us through shoulder stand until Frederique’s return. We then went through a few minutes of seated poses and then savasana (a welcome relief). A few ‘namastes’ later and we were quickly mopping up our mats in a rush to get back out into the cool air of that hallway. We spoke to Frederique briefly after class to thank her for only killing our spirit that day (and not our actual physical bodies)…and for reminding us why we don’t do Hot Yoga on a regular basis. I’m sure she thought we were strange (my sister and I do get a bit goofy when we’re together) but we managed to get a laugh out of her…even if it was the nervous laugh of someone trying to figure out how to get rid of 2 wack-jobs.
We never found out the fate of that man and I kind of like not knowing since it adds a little mystery to the story of the Yoga Class that Crushes the Soul.
On a more serious note: The class we took was a form of power yoga with more emphasis on sweating (obviously) and non-stop movement than on postures. There were no corrections made, no alignment cues or break downs of poses. For me, it’s a nice change once in a while to work my butt off like that but it helps to already know what the poses are supposed to look like and the correct way to perform them without assistance. The class was so big that one instructor would never have been unable to help every student in the room. Power yoga is often taught like this as many Westerners want their yoga class to feel (and be) more like a physical workout.
If you’re looking for a more traditional yoga class they do offer them at Samatva but I haven’t any experience with their class size or if they help with adjustments. But it is a very well run studio with such a variety of classes and teachers that I’m sure one could find exactly what they are looking for when it comes to style.
Still wondering how the Partner Yoga ended??

Had this been a video you would have witnessed my lovely sister (in the pink) bend and straighten her legs several times as my face smacked right into her rear end. Over and over and over again. Yep…that’s some sisterly love right there. I’m just glad I didn’t pee myself from laughing so hard. I’m really glad she didn’t either! 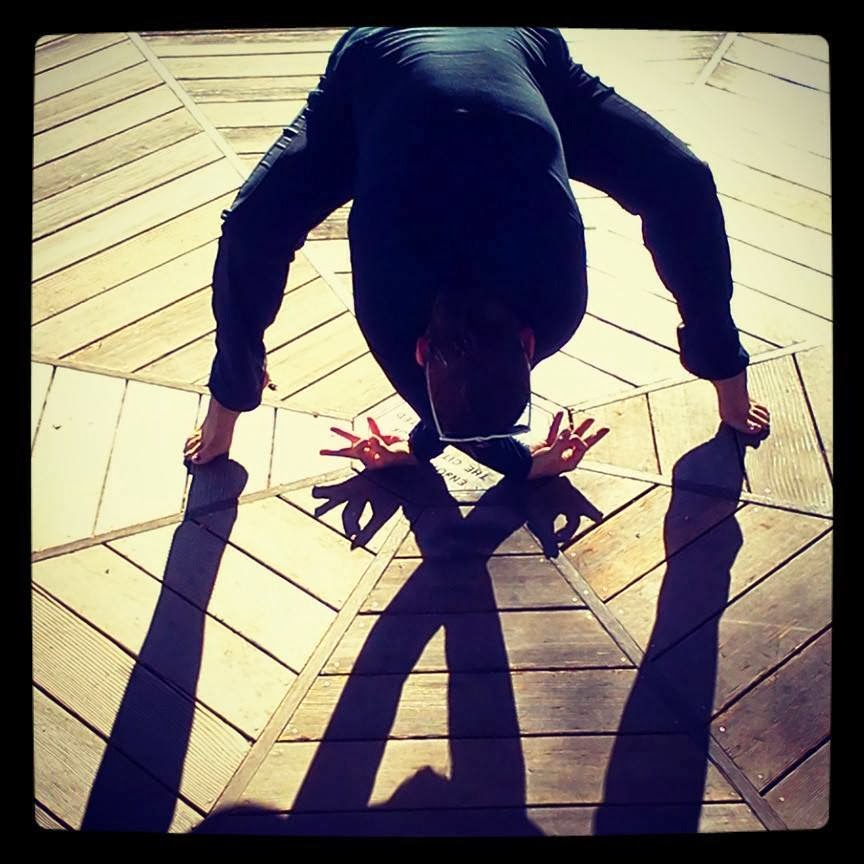 BONUS:
If you haven’t read this yet it’s a hilarious Craig’s List ad (it’s been removed since it’s publish) for a used hot yoga mat. It’s well worth the read. Check it out here.

Very nice Lynn…Laughed out loud (more than once)!

Got me laughing out loud! Yes, you and Marylou are sisters. That's for damn sure!