I Left My Liver in San Antonio

Much of our stay in San Antonio is a blur and I blame our friends Otha and Leah Livingston for all of it. If you know who they are then you know what I mean.

When we found out that Clark’s former co-worker and friend, Otha was at school in the San Antonio area we figured it would be nice to stop and say hi. When we learned that his wife (and my friend), Leah was flying out for a long weekend to visit him we made sure to time our visit to coincide with hers.  What follows are the few things I remember about that meeting…please don’t judge us.

We parked the Mutiny at Traveler’s Carefree RV Resort which was the closest RV park to downtown San Antonio (see our Lesson Learned in Austin TX). Carefree is your typical ‘blue-hair’ (no offense intended) resort complete with Harold & Thelma’s 42-foot Super Grand Deluxe rig parked next to your “wow, our rig looks so tiny, old and dirty“ trailer park reject…her flower boxes bursting with red, white and blue plastic flowers and his lighted flag pole proudly waving the U.S. flag, the Florida State flag, and a Marine Corp flag. Their rig is pristine, the chrome so shiny it hurts to look directly at it and the driver’s door is covered with every RV membership sticker known to man. But they’re nice and they smile and wave at our comings and goings…something you don’t find every where (trust me).

The cool thing about this park (other than having every amenity under the sun, a welcome thing after not having clean laundry in 2 weeks) is that there is a shuttle stop right there that takes you to the River Walk!! It’s also just a quick 5-10 minute drive to the Alamo. Well worth the few extra dollars per day!

Every thing you’ve heard about San Antonio is true (that is if it’s all positive). The River Walk is kind of like a walking the streets of Disneyland (minus Goofy and Cinderella). Even in February there were baskets of flowers every where and strings of lights hanging across the river. It’s like a celebration is happening every day. If you have never been to the River Walk you should add it to your list of things to see. You have to walk down the stairs to get to it…and are well below street level which is so cool as there is no traffic or street noise to worry about.

The weird part is that much of the walkway has no guard rails and with all of the bars and pubs it’s a wonder we didn’t see anyone fall into the water. We were there over President’s Day weekend which really doesn’t scream ‘busy tourist weekend’ yet it was crowded and there were times I was sure (even when I was sober…or maybe especially when I was sober) that one of us was going in. I made Clark walk on the water side.

The other thing to be aware of when at the River Walk is that it can be confusing. We went every day for 3 days and never once got the hang of it. Since you are below the city streets it’s easy to get turned around. I felt like a prairie dog when we’d occasionally go up the stairs to pop our heads out in an attempt to get our bearings. I even tried to use the walking part of the navigation app on my phone to get directions to where we were supposed to meet our friends, going up one set of stairs and down another and walking for a quarter of a mile only to end up right where we started. It is a challenge and I highly suggest the city of San Antonio hold geocaching training right there…and perhaps make it mandatory for visitors.

We set ourselves up for insults and greasy food at the famed Dick’s Last Resort where the margaritas were about the size of a small sail boat.  It was only later that we learned they were meant for sharing. Within minutes our waiter pegged our personalities and made us wear hats for all to witness our true characters.

Somewhere along the line we went to Pat O’Briens where I recall Leah and I danced…I think there were some other people there but I cannot say for sure. Pat O’Briens is like a Black Hole. If you find yourself within sight of one be warned…it will suck you in the front door and spit you out the back and somewhere along the way 4 hours of your life will have disappeared. You will then wake up the next afternoon wondering who filled your mouth with cotton balls or put tiny socks on each of your teeth and asking if there is something wrong with the sun because it is exceptionally bright today.

To be honest I don’t even know what day it was that we went to Durty Nelly’s. Perhaps I’m afraid of what you’ll think of us if I mention is was the same day as Pat O’Briens or maybe it would be worse to admit we did this thing 2 nights in row. All I know is that we were there at some point…and that it’s a cool combo of Irish Pub and Piano Bar and the drinks must have been good because I don’t remember any of it…except peanuts…lots of peanuts and shells on the floor. I’m pretty sure that was what we ate for dinner but no one has confirmed that as a fact yet.

The next night (it took us that long to feel up to moving around) we meet Otha and Leah at the Alamo Drafthouse which is actually a movie theater that serves beer, wine and dinner during the movie. We watched Identity Theft and enjoyed some burgers (mine was veggie) but opted for non-alcoholic drinks thanks to the night(s) before. It’s a genius idea that works well and isn’t as distracting as you might think. I think every town needs a place for dinner and show. 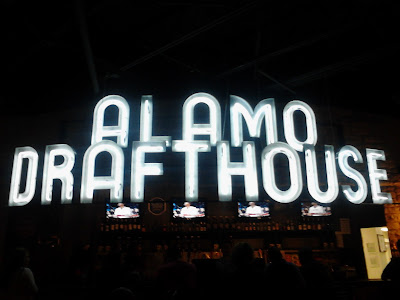 As much as we love Otha and Leah our livers were glad we only had a few days to spend with them. You know it’s bad when “detoxing” (not just from alcohol but from fried foods too) sounds good to Clark. Eating rich, Texas style foods sounds good until that’s the ONLY option and you’re body is craving a piece of lettuce or a carrot…or anything that hasn’t seen grease or been breaded. Three days of abuse and we happily headed for some RnR on the coast.

This is hilarious! I'd like to say I have friends like Otha and Leah, but the reality is I think that WE are the Otha and Leah to most of our friends… San Antonio's a cool city – I've only been there once, years ago, but I'm hoping to get by there this fall on our way to Florida.

Glad you didn't have to be dredged from the river!

I just love the blog….your liver will recover…