One of the first things we wanted to do after moving to the ranch was get a few chickens because, really, nothing says farm life better than chickens. But with an expanding menagerie comes feed bills and it was (and still is) important to us to be able to live within our current means. In other words, there has to be a benefit to offset the cost of pretty much everything we hope to accomplish and the chickens are no exception. So, in return for food, shelter, water and bedding the chickens provide a few eggs, fertilizer (manure), pest control and weed management…or at least they will as we grow our flock. Pastured eggs in our area run about $5 a dozen and require a drive into town and since we want to follow the permaculture principles synthetic fertilizers and toxic pest control products are not items we wish to use.

We had to build a coop. It gets really cold here and our hens would need refuge from the elements. We also live in a area with predator birds and I think I would be scarred for life I witnessed a poor, fluffy hen being whisked away by an eagle or hawk. We also have our fair share of foxes, skunks and even a cougar or two. Having immersed myself in the study of permaculture, which included reading a crap ton of books of the subject, I had ideas…big ideas…about how to build our coop and a chicken tractor!

Because our property already had a free-standing shed of sorts it made sense to try to use it for the coop. However, it was kind of an eye sore and it’s more ramshackle than we’d hoped but, it’s what we had so in the spirit of thriftiness we devised a plan. We would build a hay bale chicken coop! Why hay bales, you ask?

How we built it:

Basically, we just stacked our hay bales in an offset pattern. Since we had a few 2x4s laying around we used those for bracing but you can also drive lengths of rebar through the bales for more stability. We actually ended up using rebar to “nail” our door frame into the ground and the surrounding bales of hay and it’s held up really well. We stacked our bales to the ceiling, packing “flakes” and loose hay in any gaps both to keep predators out and for additional stability. Then we wrapped the outside  of the bales with chicken wire (can you tell we were worried about our chickens safety?).

We ended up finding an old screen door on the property that worked perfectly for the coop. In the summer it allows for the flow of air and, now that winter is coming, we’ve covered it with a sheet of plastic we saved  from our new mattress (it came wrapped in heavy duty plastic) to keep drafts out. We also found scrap roofing joists for cheap at our local Habitat for Humanity ReStore which were perfect for making the laying boxes. And, because we have so many trees on the property we opted to use their branches for the roosts but I keep my eyes peeled at the ReStore for old wooden railings so we can eventually add more. 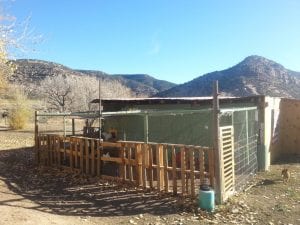 For the exterior pen, Clark cut in a little door/ramp so the chickens could come and go at their leisure (however,we do lock them in the coop at night). We obtained some free pallets from our local hardware store and stood them on end to act as a fence base for the pen using more scrap rebar to “nail” them into the ground. A few scrap pieces of 2x4s attached to the pallets enabled us to make the pen tall enough for us to walk around in. We stapled chicken wire around the whole thing and built a small door (for us) out of an old full-sized headboard (stood on end).

We now needed some chickens! 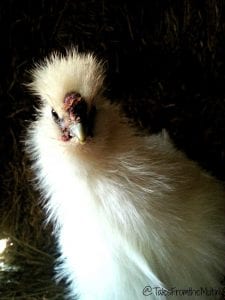 I was scouring the local Facebook sale and swap groups, keeping my eye out for anything that would be useful on the ranch, when I came across someone’s trying to sell two white silkie hens. Now, I’m no chicken expert and I had idea if silkies were laying hens but they sure were cute. Often called the kittens of the chicken world I convinced Clark that these two hens would bring us much joy (and maybe a few eggs). We immediately contacted the seller and picked up our new family members a few hours later.

Within an hour of arriving at Mutiny Ranch one of the silkies crowed. If you’re not sure what that means I’ll tell you this…only roosters crow. And only hens lay eggs. Now, before you guys think we must be big dummies buying a rooster I need in explain…the guy who sold these silkies to us was in the chicken business so when he listed them as “hens” in the sales ad we believed him. And when we went to look at said chickens he claimed they had recently started laying eggs and his son offered to go get some out of the fridge so show us. Sadly, we declined.  Also, silkies aren’t like other breeds of chickens…the roosters don’t grow big combs or fancy tail feather or any other telling characteristics. Really, go ahead and Google it………See! It’s almost impossible to tell a rooster from a hen in the silky world.

Being the positive people we are we tried to turn this trickery into hope. Hope for the future. If one of our silkies was a rooster and the other a hen then that would mean we could raise our own silky chickens! We’d have dozens of adorable baby silky chicks running around. I don’t even know what they look like but they must be super cute!

A week later the other silky crowed.

I’m not even joking.

We had been duped. We had two freakin’ roosters (and we paid for them…most people in these parts give roosters away!). There would be no eggs, no baby silkies, no nothing. Silkies aren’t even exactly edible (their bones are black, their flesh is grey and they are small birds). We were also attached to them already. We went back on the hunt for some hens and found some from a tiny house living, homesteading couple just down the road from us. Brittney and Matt were kind enough to gift us two beautiful Brown Leghorn hens who actually laid eggs for us the same day we brought them home. Gerty and Frida are beautiful, friendly ladies and I love them to pieces (well, not as in breast, legs and thighs…I mean as family members).

Heckle and Jeckle,, our roosters, are another story. Cute and comical but kind of a$$holes. However, all four birds are bonded now. The hens give us an egg a day each (production is slowing down now that the days are shorter) and the rooster are good protectors for being little guys.

The coop is holding up well and we’re happy to report that we’ve had no predators as of yet but we’re also not fooling ourselves that they are a reality of farm life. The chickens spent most of their summer days in the chicken tractor (there will be a separate post on this), helping till the future garden plot and eating lots of grass and weeds.Now that winter is here they are enjoying kitchen scraps and freeze dried meal worms.

We’re so happy to have our little flock and it really does feel like a farm. We weren’t going to get any roosters for fear of their early morning (and sometimes all day) crowing but we enjoy hearing Heckle and Jeckle calling out to the world that they better not mess with their women. Thankfully, they are late sleepers and, being on the small side, they don’t crow very loudly.

We love your questions and comments so leave them below and we’ll get back to you as quickly as our Internet allows!

Inspiration for our Chicken Hay Fort came from the book Chicken Tractor: The Permaculture Guide to Happy Hens and Healthy Soil by Andy Lee:

Note: Since we basically built the chicken coop as a room inside out existing shed we ended up only using hay bales on the two interior walls. This helped us preserve floor space for our chickens, especially since we hope to get a few more. We needed to keep room in the shanty for storing our equipment (ATVs, mower, attachments, etc). If it this design proves to be too cold over the winter we will either add heat lamps and/or redesign the coop next summer with all four walls made of hay or straw. 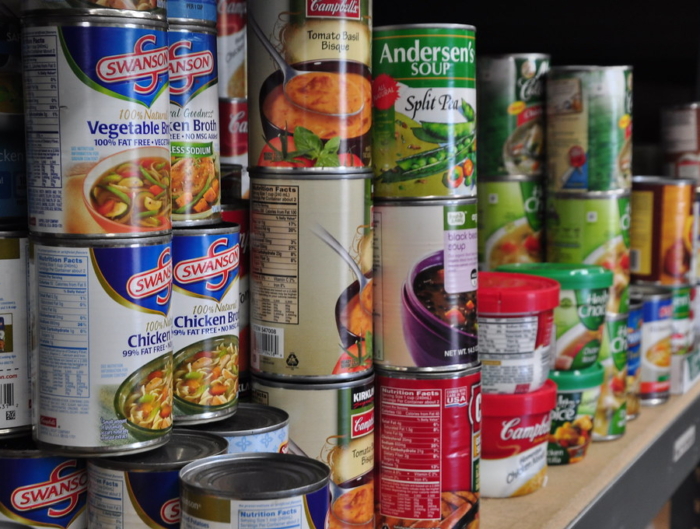 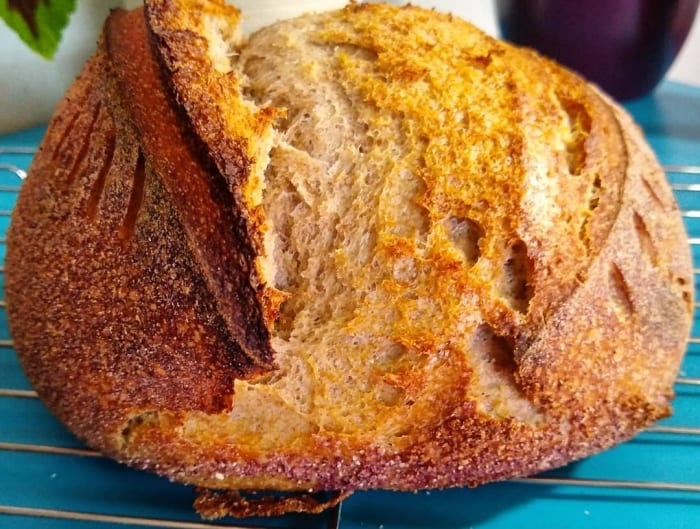 I love your chicken coop! So creative and festive with the flags 🙂 What a fun adventure you guys have embarked on with your homestead.