If there was one place…one adventure…I had to pick as my favorite out of all the things we did and experienced in Alaska it would be McCarthy and Kennicott. Hands down.

Yes, seeing whales breaching and puffins flying and bears grazing and eagles soaring was beyond my expectations on this 3 month journey. But McCarthy? Well, it’s just special. And after talking with our travel companions, Gone With the Wynns and The Learning Banks, without a moments hesitation, we are all in agreement…go to McCarthy!

So what makes McCarthy so special? Could it be the 60 miles of tooth-rattling washboard road that dead ends a mile from the town at the foot of the Kennecott River? Or is it the fact that the town has a population of around 25 yet has a full bar, several restaurants, a hotel, an outfitters, a grocery store and ice cream shop…which all run off of generator power? Maybe it’s the mining history with it’s copper so pure it’s never been seen anywhere else in the world. Or is it the sad history of the 1983 mass murder (6 victims, which was almost a third of the population) by one of the townspeople? Of course, there’s always the bizarre (yet true) story of Pilgrim and his family who disrupted the lives of many and made enemies of the National Parks Service (read about that in the book Pilgrim’s Wilderness). For a place so small it has so much to offer…the stories, the struggle, the rugged beauty and the remoteness of this town all combines to etch itself onto one’s mind forever.

First and foremost, I have to thank Nikki and Jason Wynn for encouraging, persuading and otherwise making us feel like laa-hoo-zers if we didn’t take the RV all the way to McCarthy. Trust me, I had read the horror stories online and the warning in the Milepost. I watched YouTube videos other brave souls posted of their treacherous attempts to make it to and from McCarthy with only 3-4 flat tires. The road was once the railroad bed and when the rails were removed they left behind the spikes and railroad ties. After inclement weather ties and spikes have been known to “pop up” out of the mud. I tried to mentally calculate the massive amount of money it would cost us to get towed out of the mud if we got stuck. I reminded Clark how much our new tires had set us back. I was wringing my hands for days. Then I got up early and drove to the ranger station down the road from where we were staying in Chitina and asked if it was even possible to take a Class A RV down McCarthy Road. His answer was yes…but he wouldn’t take his RV down there (sometime ago road graders were dispatched with powerful magnets strapped to their bumpers, picking up those dangerous spikes as they repaired the road). Well alright!

How do I explain this? The drive was horrible and grand all at the same time. Shit was rattling loose as we drove down the road. I grabbed towels and jackets and shoved them under and around various *things* to buffer the sound (and hopefully keep them intact). We went s-l-o-w…maybe 25 mph for much of the drive. But once we reached the end of the road? That was pure joy…we had conquered McCarthy Road in a Class A RV! The owner of the Base Camp Campground came up and said something like “well this is a first…three Class A’s rolling in at once!”.

We dry camped right on the banks of the Kennecott River with Root Glacier in the distance.

We crossed the river on a walking bridge (which used to be a bucket and pulley system back in the day) to catch the shuttle to Kennecott (the mining town and gateway to Wrangell-St. Elias National Park).

We hiked on a glacier. ON.A.GLACIER.

I did yoga on a glacier.

We ate the best pizza any of us have ever had. And it was made in a bus in a town of 25 people. Not only that, but they gluten free pizzas, vegan pizzas, breakfast pizzas and delivery to your campsite. What?!?!?

The bar in town, The Golden Saloon, does a pretty nice job of making everyone feel welcome and entertained, especially nice in a place where they have a captive audience (being the only bar in town sometimes means crappy service).  There’s often live music, open mic nites and jam sessions. But, it’s also McCarthy. McCarthy attracts a certain kind of people…bohemians, adventurers, risk takers, social misfits and those who came to live here to get away from “normal life” including you’re typical microbrew/hipster scene. So yeah, you might be sitting on the porch eating your expensive grass fed burger (or homemade in-house veggie burger) and hand-cut sweet potato fries when someone decides to stand right next to you and light up. I’m not sure if it’s lack of manners, cultural differences or just a f^%k it attitude that seems to be part and parcel of visiting McCarthy. To me, it made the experience more raw…kinda like the wild west. 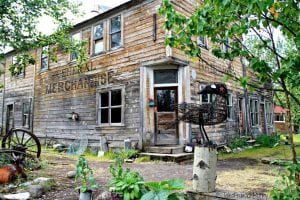 There’s really so much more to McCarthy and Kennicott then I can put in a blog post (this one is already long enough). The restaurants in McCarthy and the one at the hotel in Kennicott are above par (from what I heard). There’s a little taco truck in Kennicott that’s a favorite for locals and offers pretty good vegan and GF stuff (as well as “normal” food). There are hiking trials and tons of history. The outfitters offers guided glacier hikes, white water rafting and teaches ice climbing. You can catch a flight to remote areas of Wrangell-St. Elias for some backcounrty hiking or just go for a scenic flight over the glaciers. It’s probably the most unique places we’ve been to so far. Our only regret was that we didn’t spend a week or more here (only two nights).

If Alaska is in your plans and you have a pretty keen sense of adventure I’d highly recommend making the trip to the end of McCarthy Road. We found a free camping spot in the nearest town of Chitina where we left our toads (the vehicles we tow behind our RVs) since there are no outside vehicles allowed in McCarthy (they only vehicle bridge is on private property and locals have to buy an annual $300+ “pass” to have access to use it, otherwise you have to wait until the river freezes solid to find a way across). A few of our friends who came later decided to leave their RVs in Chitina and drive their toads for a day trip (you could also overnight in a tent or one of the hotels). By the way, if I remember correctly Verizon and AT&T worked great at our camp sites. Those who needed to work were able to do so.

For more information on McCarthy Kennicott and details on where we parked in Chitina (pronounced Chitna) be sure to check out Gone With the Wynns blog post Ice, Ice Baby and this video of the glacier hike.

WOW! Not sure we'll make it there, but we will be passing the turn-off. Was there any diesel along the way? The pizza bus looks fun and the hikes excellent. Thanks!