Prepping for Alaska {and adopting a dog} in Ferndale, Washington 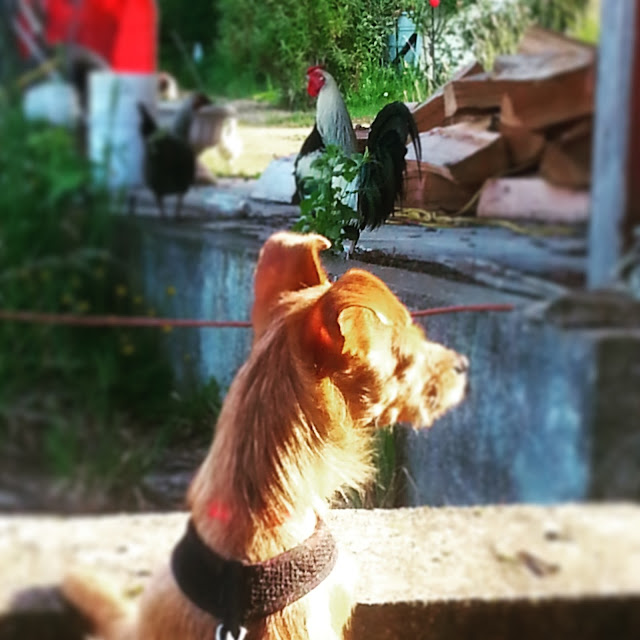 Some time in the Fall of 2014 we had pretty much decided to do Alaska the following summer. Fuel prices were dropping (we had no idea they would be even lower this year) and we had a family wedding to attend in the Seattle area Fall of 2015. So, it made sense to stay out west. And, well, Alaska is about as west as you can get. As we chatted to and met up with some of our longtime nomadic friends it seemed they had similar ideas~or could be easily persuaded~to head north too.

I (Lynn) had lived in Alaska for 5 years, having graduated from Ben Eielson High School and then attended the University of Alaska Fairbanks. But, it had been 20ish year since I had been back (aside from a long weekend in 2002 for my sister’s wedding). It was important for me to return and Clark was interested in visiting the places that helped shape the person I am today. I had also had the pleasure of tent camping the Alcan twice…the first time when my parents and I, along with 2 dogs and a cat, traveled from Southern California to Fairbanks in a single cab pickup truck. That was the Summer of 1987. I returned to California via the Alcan in 1992.

Having had those experiences I knew a few things about our impending journey. I also read a lot of RV blogs for more recent travel information. Surprisingly, I read quite a few blogs and forum comments whose authors were quite adamant about not traveling to Alaska. Regardless, we knew we had some prep work to do to give us the best odds of a pleasant and safe trip.

We really lucked out when a friend (and former co-worker) of Clark’s offered us a place to not only stay, but also to store some items we wouldn’t be needing on our journey through Canada and into Alaska. Stephanie and Michael live in Ferndale, just north of Bellingham, in Washington state. If you’re doing your own research on an Alaska trek you’ll find Bellingham is a favorite “jumping off point” for many travelers. We had planned on pairing down and leaving behind quite a few things we knew we wouldn’t need in Alaska. That included our bikes since, I’ll admit, we worried would bounce around so much on the rough roads that we figured we’d lose them anyway. We also left behind quite a bit a of booze and had Michael lock up our handgun and shotgun in his gun safe. (There are some very strict rules for bringing guns into Canada and we didn’t want the hassle).

But we also took this time to have some fun with our hosts. Shane, Stephanie and Michael’s son, had made us a sign showing us all of the wonderful amenities we’d have while parked, for free, alongside their barn. 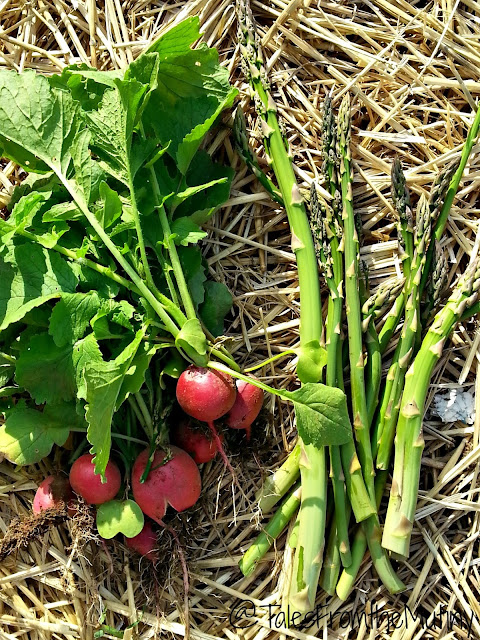 We had a couple of great cookouts, picked fresh asparagus straight from their garden, tried some of the great food and coffee the area has to offer and spent some real, quality time with this kind family.

At one point I was invited to go with Stephanie to pick Shane up at the Bellingham Humane Society where he had been volunteering. Well, if you’ve followed the blog for any amount of time you probably know we love animals. About a year prior we lost out beloved dog, Cleo, while visiting Hot Springs, Arkansas and as much as we were learning to enjoy the freedom that comes with no dog responsibilities, we missed it too. I casually browsed the adoptable dogs and promptly fixated on a little white chihuahua.

Two days later I couldn’t get that little dog out of my mind. Clark, semi-reluctantly, came with me “just to see” him but by the time we arrived he was already adopted. That’s when it happened. Clark spotted a tiny little ragamuffin with fur the same color as his hair. Call it a Ginger thing but Clark was smitten. That very morning a little terrier/chihuahua cross was surrendered (for a second time) and now here we were…in love. We took that little dog (called Shelby at the time) out for a walk and got to know her. And then we immediately adopted her.

Today you all know her as Nellie and she’s led a pretty exceptional life since her adoption. But first…back to Alaska. I know, I know, adopting a dog a week before heading to Alaska while crossing international borders probably isn’t the brightest thing we’ve done but hey, our spontaneous decisions have led us to some of the most amazing experiences so screw it! We now added health checks and pet vaccinations to our list of crap to do before we leave the Lower 48.

Some of the other prep work we did:

Replaced all 6 tires on the RV. When we passed through Idaho we had Les Schwab replace all of our tires. Although the tread was still good the tires were aged. Between the rough roads and remoteness of many of the places we would have to travel it was the best insurance policy we could have purchased. You can read our full blog post, including prices, here.

Had our 500 mile torque check on the new tires. Thankfully, we didn’t put this off or, worse, completely brush if off because a few of our lug nuts were dangerously loose. It was quick and easy and the guys at the Ferndale Les Schwab were a lot of fun.

Oil changes all around! The Jeep, the RV and the generator all got serviced. That meant oil changes, brake checks, fluids topped, filters changed, wipers checked and/or replaced, etc.

Ordered and received our copy of The Milepost. I will stand by this one…The Milepost was indispensable on our Alaska trip. I know a few RVers that didn’t have it and they had no issues but I love, love, love the Milepost. We used one back in 1987 for our trip up and it really enhanced the experience. It’s more than a book of advertisements. It has historical facts, out of the way places, hidden gems and plenty of information on fuel stations, campgrounds and dump stations that can really come in handy when you don’t have cell or wifi. 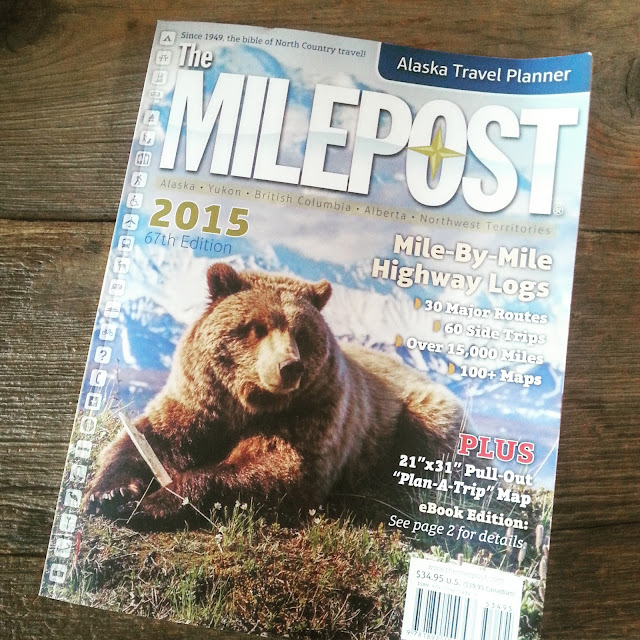 Purged!! We really wanted to lighten the load on this trip. On top of removing items that might get us in trouble at the borders (like the guns and alcohol), we also left behind heavier items like our bikes, golf clubs, EZ Up and various other items. Thankfully, we had permission to store these items in Michael’s barn saving us from renting a storage unit.

Bought a few essentials. Bug spray, rain jackets, waterproof boots, bug shield shirts and a gold pan (not really). We were able to find a few items we knew would come in handy before we were at the mercy of the elements (and prices). 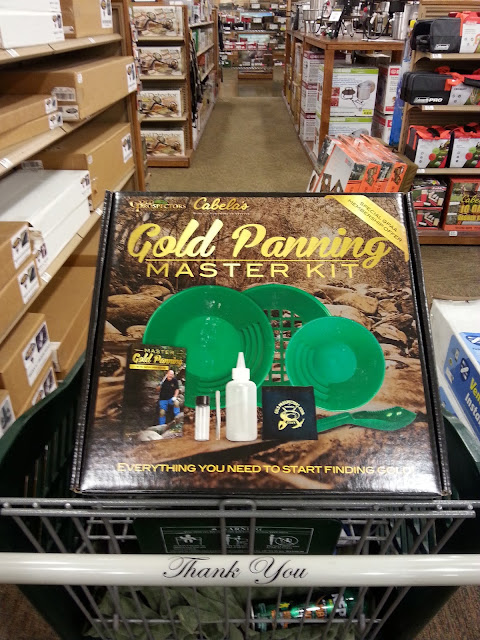 Networked with fellow Alaska Bound Nomads. I created a Facebook group specifically for those of us going to Alaska the Summer of 2015. Some had left the month prior of our planned departure so they were able to report back to the group on border crossing experiences and road conditions. As the rest of us migrated up the road we left tips on where to boondock or find dump stations or the ever precious wifi hot spot. I’d highly recommend finding a page like this or starting one of your own. 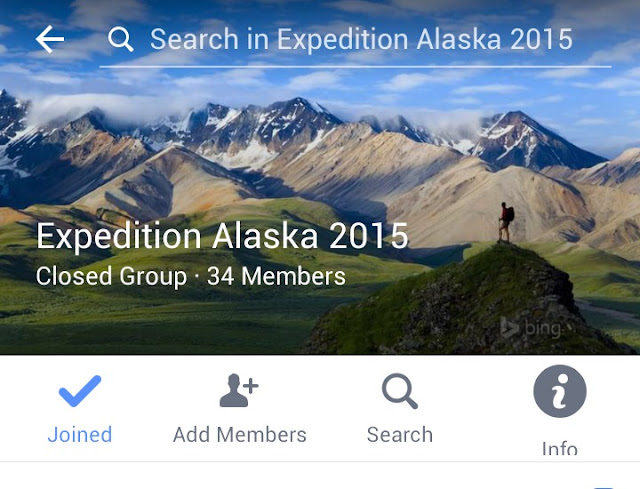 Left a lot up to chance. We purposefully didn’t plan much more than a rough route. We had plans to meet up with fellow travelers for Summer Solstice (Jun 22) in Fairbanks so that left us with 3 full weeks to get there…a lot more time than most of our friends would be taking. We changed plans three times while we were traveling through Canada. The first was to stay behind in Prince George as our traveling companions, The Snowmads, kept moving. The second, which we also made in a casino parking lot in Prince George, was to stay on the Cassier instead of heading north to join the Alcan and the third was decided in Whitehorse…we would take the northern route through Dawson City and Chicken…making our trip a little longer. 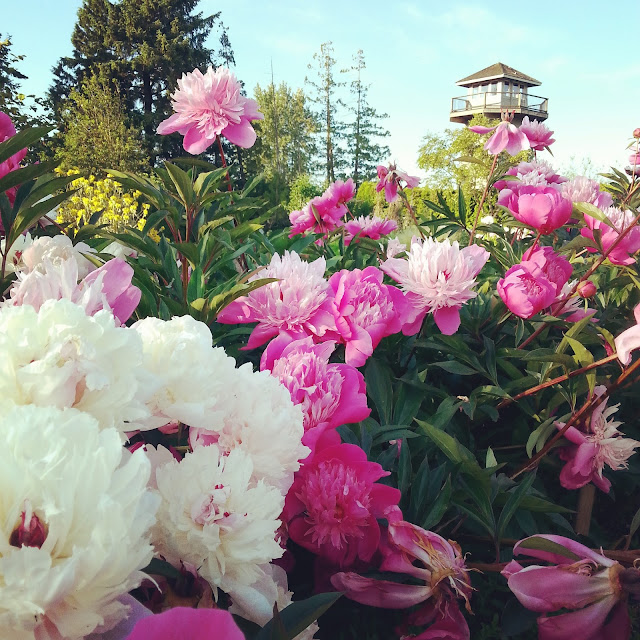 We thoroughly enjoyed our time in Ferndale, which was only made better by our company, Stephanie, Michael and Shane. The area was simply beautiful and, had we not been preparing for a major trek to Alaska (and back) we’d have loved to spend more time exploring and hiking the local area.

Check out Our 10 Tips to Prepare For the Bold Adventure That Is Alaska blog post for more information.