When leaving Whitehorse we came to a fork in the road, literally. The road that led west was the Alcan and a span of about 60 miles of potholes, frost heaves, gravel and construction (as reported to us from friends who had already traveled it). The road that led north was the Klondike Loop and Top of the World Highway…a longer route that would take us to the infamous Dawson City. We put a message out to our Alaska Facebook group and learned that the roads were in great shape…so long as it didn’t rain. North we went.

Once the capital of Yukon, Dawson City was the hub of the Klondike Gold Rush with an estimated population of 40,000 (including Jack London, whose novel Call of the Wild is set here, and Robert Service). Thanks to the construction of the Alcan, which bypasses Dawson City by 300 miles, the population has dropped to around 1400. In the 1960’s the city was declared a national historic site so there is plenty to see and do here. We decided to spend two nights here and camped at the Yukon River Government Campground on the east side of the river.

Now, getting across the Yukon River is a pretty interesting deal. The George Black Ferry runs 24 hours a day May through September (except on Wednesday when it shuts down from 5am-7am for service). It’s also free. And yes, your RV will fit (our 32 foot Class A with a Jeep Towed fit and they put another vehicle behind us). I admit, as we approached the queue I was very doubtful we would be allowed on board. The ferry looks tiny…nothing like the huge ones we’ve been on in Washington State, Texas or North Carolina. But no one even blinked an eye. Travel Tip: While there are a few RV park on the Dawson City side of the river we really enjoyed staying at the Yukon River Government Campground. At $12 per night and all the free firewood and a great view of the river it was a great deal. Combined with free, walk on ferry crossings (at any time of the day or night) it was the perfect spot for us.

A stroll through the historic town that took us by Jack London’s and Robert Service’s cabins, Pierre Berton’s home turned writer’s retreat.

A stop at Bonanza Market, Forty Mile Gold Workshop and the Dawson City Museum (which is excellent).

We had coffee at the Alchemy Cafe, which also serves some amazing locally grown dishes.

But the real draw was a chance to earn our Sourtoe Certificate. Now, I’ve known about this Klondike tradition for some time but our friends Jeanette and Eric, from JenEric Ramblings, had beat us to Dawson City and already posted photos of their success with the sourtoe. There was no turning back now. There’s no way to explain this without telling your the of the legend.

“The legend of the first “sourtoe” dates back to the 1920’s and features a feisty rum-runner named Louie Linken and his brother Otto.  During one of their cross-border deliveries, they ran into an awful blizzard.  In an effort to help direct his dog team, Louie stepped off the sled and into some icy overflow—soaking his foot thoroughly.
Fearing that the police were on their trail, they continued on their journey. Unfortunately, the prolonged exposure to the cold caused Louie’s big toe to be frozen solid.  To prevent gangrene, the faithful Otto performed the amputation using a woodcutting axe (and some overproof rum for anesthesia).  To commemorate this moment, the brothers preserved the toe in a jar of alcohol.
Years later, while cleaning out an abandoned cabin, the toe was discovered by Captain Dick Stevenson.  After conferring with friends, the Sourtoe Cocktail Club was established and the rules developed.  Since its inception, the club has acquired (by donation) over 10 toes.”

So, we headed into the Downtown Hotel, had a stiff drink to build up our courage and proceeded to concur the Sourtoe. I’d like to think it was really a piece of beef jerky, maybe a Slim Jim , made to look like a toe. But the thing had a toe nail on it. I drank my Yukon Gold shot (with the toe in the glass) as quickly as I could without swallowing the toe (which has happened at least 9 times). The Captain then took the toe out, squeezed it like a lemon wedge, and offered the glass back to me…wanting to ensure I didn’t miss a single drop of sourness. I wish I hadn’t drank that part. It was bad…

Alas, we both earned our Sourtoe Certificates and received applause from the other bar patrons. We made our way, perhaps a little tipsy now) back to the ferry and headed home. Dawson City had lived up to it’s reputation, at least in our minds. It was a fun stop that made us extremely happy we had taken a chance on this route.

As it turned out, rain was in the forecast for our trip over the Top of the World Highway. This is a stretch of narrow, dirt road that often runs extremely close to the cliff edge. Not the most fun thing to tackle in a downpour which left the road a slippery mess. By the time we got to the town of Chicken we didn’t even bother to get out of the RV. We just tried to wait out the rain, along with dozens of motorcyclists who had been taking part in the annual Dust 2 Dawson Bike Ride. But we made to Alaska on June 20, overnighted at a Tesoro Gas Station in Tok and arrived in Fairbanks on Summer Solstice. 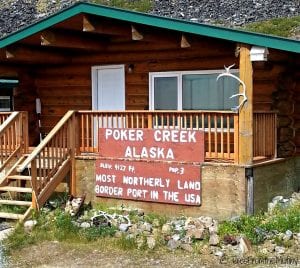 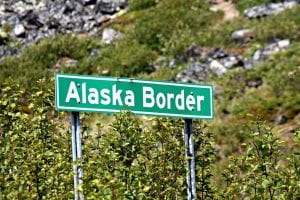 How exciting Ken!! Fulltiming has been one of the best decisions we made. I hope you love it as much as we do. And thanks so much for letting us know you are enjoying these posts. Makes me want to write more. =)

I'm really enjoying your Alaska trip. we will start full time RVing this July. Alaska is on our bucket list within the next 3 years. you blog is really helpful.

Top of the World was in great shape. MUCH better than the Alcan from Destruction Bay to the Alaska Border…we came back that way in September and it was awful. Made me wish we'd done Top of the World again. When we went up last year neither of us had International Calling plans so we had zero cell service anywhere. As a matter of fact, I have a Straight Talk phone on the Verizon platform and it didn't even work in Alaska…anywhere. Apparently, ST doesn't have any towers up there but is supposed to have them this year(not sure as I haven't heard).

HA! The pictures in DC itself have clear sunny skies, and then … Other than the rain how was the TOW road conditions? It's on the agenda for this year, so we are still behind you! Was there cell service at the campground? Certainly appreciate your posts. THANKS!