Having lived in the Fairbanks area for 5 years (1987-1992) it was with mixed emotions that I was back again. Sure I was eager to show Clark around and take him to my high school (ended up we couldn’t get on base to see it), the University I attended and some of the places I worked (I held 3 part-time jobs while going fulltime to college) but I also hold a secret disdain for Fairbanks. I never really liked it there. It’s a sprawling, somewhat unattractive city. I much prefer the nearby town of North Pole but even it lacked the charm I remembered…as many places do when we revisit them many years later. To me, Fairbanks is the kind of place you stop for maybe 3 days…tops. Get some supplies, see a few things, change your oil and then go explore the rest Alaska (that is, unless you drove all the way to Alaska to hang out in cities and have access to Walmart). 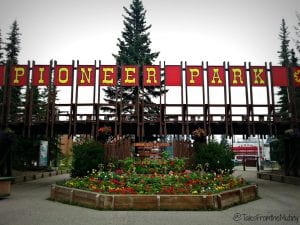 We were, however, eager to meet up with our fellow nomads. Pioneer Park (which had once been called Alaskaland) offers boondocking for RVers for a small fee. It was chosen as a convergence point due to it’s proximity (within walking distance so no worries about too much beer) to the Midnight Sun Baseball Game we would all be attending on the summer solstice. While it is blacktop camping, it’s also convenient to all the things you might need in town and, since you’re parked literally right outside of the Park, you have access to all of the little shops, restaurants, salmon bake and museums…all located right across the parking lot. High up on the list of good places to eat is The Crepery, listed as the number one restaurant in all of Fairbanks. Located in Pioneer Park in an old restored cabin, they make the crepes right in front of you and seating is outside on the picnic tables. Not your typical restaurant setting but delicious none-the-less. 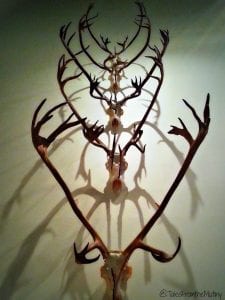 During our visit last year, Alaska was experiencing a huge number of wildfires. This left the skies in the Fairbanks area heavy with smoke. Visibility continued to worsen the longer we stayed so we hurriedly picked a few places to tour before heading out of town. The University of Alaska Fairbanks was top on the list since it’s my alma mater. Our favorite stop was the University of Alaska Museum of the North. Let me tell you, this museum is exceptional (IMO). What it lacks in size it more than makes up for in content. It’s probably my favorite place in Fairbanks area…or maybe I’m just sentimental. If you stop by don’t miss out on The Place Where You Go to Listen exhibit, it’s magical. 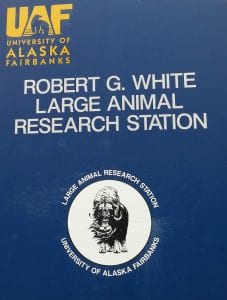 We also swung by the Large Animal Research Station (also run by UAF) to check out the muskox and caribou herds located here. Unfortunately, we arrived too late for a tour which I highly recommend taking. Check out their website (see above) for scheduled talks and feeding times. Although there are about 4000 muskox in Alaska, this might be your only chance to see them. Other spots we liked: Fairbanks Coffee Roasting Company…an impressive selection of beans (I recommend the Timor L’Este which is hard to come by), The Santa Claus House…it’s cheesy but iconic, you are after all in North Pole. The Knotty Shop…perhaps not worth driving out of your way to visit but it’s a quirky stop if you’re passing by.

And, of course, we hit up the local baseball game held at midnight on the longest day of the year…almost 24 hours of daylight this far north! Fairbanks puts on several activities to mark this very special day and, with it’s warm temperatures (believe it or not, it can get into the 90’s here in the summer), who wouldn’t want to stay our all night to experience this? We were reunited with Jason and Kristin (The Snowmads), Taylor and Beth (The Learning Banks), Jeanette and Eric (JenEric Ramblings), Chris and Cherie (Technomadia), Josh and Marie (Ardent Camper), and met, for the first time in person, Jason and Nikki (Gone With the Wynns) and Dave and Ann (Advodna). Other nomads were in the area (MaliMish, Asolojourner, VanTramp, PerkyMog and others I’m probably missing) but we never got to meet up. Alaska is a huge state and even if it only has like 3 highways you might not be able to catch up with each other.

We also spent 5 days at Chena Lake Recreation Area in nearby North Pole. It seemed no one was quite sure what to make of the massive wildfires engulfing a large part of the state and we needed some time to figure out a game plan. Originally, Clark and I thought we’d head to Denali National Park after Fairbanks but that would take us right into the fire (kinda). The eastern side of the state looked to be the least affected by the fires and, after camping for a week in thickening smoke (to the point we could smell it and our eyes burned) we decided to follow the same route as Jason and Nikki…toward Valdez.

This post made me nostalgic for Fairbanks, but I agree with you. I left six years ago and returning for a friend's first visit and have been wrestling with how much time to spend in Fairbanks. It still feels like home to me and I'm nostalgic enough for it that I'd stay the whole trip, but for a first-time visitor to Alaska, it's definitely not the most scenic. Thanks for sharing!