Expedition Alaska 2015: A Side Trip to Stewart, BC and Hyder, AK ~ The Cassier 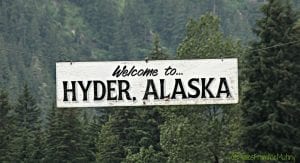 Part of the reason we chose to take the Yellowhead and Cassier Highways was that this route offers access to the Canadian town of Stewart and it’s neighboring town of Hyder, Alaska. This meant that technically, we’d cross into Alaska well before some of our fellow nomads who were way ahead of us (although we’d still have to come back to B.C. and drive through Yukon to get to Fairbanks).

Along the way, shortly after we turned onto the Cassier, we made a quick little side trip to the small First Nations village of Gitanyow.. Here you’ll find a gas and diesel bar (which we soon learned has nothing to do with happy hour) as well as a tiny convenience store with a scattering of snack options. But the real reason we stopped was to see one of the largest collections of standing totem poles in British Columbia. I’ve always been fascinated with totem poles and the depiction of the various spirit animals. These did not disappoint.

Although Hyder is part of Alaska, it’s so remote from the rest of the state that most merchants deal in Canadian currency. You can barely even tell when crossing from Canada to Alaska, except that there is an official customs stop when returning to BC so be sure you bring your appropriate documents ~ like passports ~ if you make this side trip. Hyder is mostly known for it’s brown bears. A stop at the Fish Creek Wildlife Observation Site is it’s biggest tourist draw. We were at least a month and half too soon…and no bears were spotted. However, the really nice customs agent did tell us we could probably see some wolves and/or a momma grizzly with newborn twins at the local landfill if we wanted to swing back through. So, if for some reason your Alaska adventure is lacking in wildlife, check out the landfills…apparently, it’s a thing.

Hyder itself is like a ghost town of sorts. Home to about 87 people, some of it’s roads have remained unpaved and the main drag still bears wooden sidewalks. There’s a hotel and restaurant, an RV park, bakery, grocery store and a few galleries selling all things Alaska. But if you’re hungry our number one recommendation is The Seafood Express Bus. The Bus, as it’s known locally, really is an old bus-turned-restaurant parked in front Jim and Diana Simpson’s house (Jim catches the fish and Diana cooks it up). And out of it comes the most delicious fried halibut imaginable. You should definitely go hungry because you don’t want to miss this. Grab yourself an ice cold Alaskan Ale and you’re all set. When we stopped by they were in the process of converting a tiny home structure into a coffee shop (in this coffee addict’s opinion this something the town desperately needs). 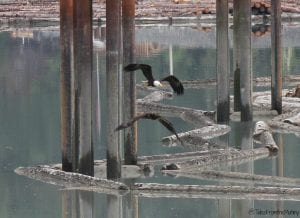 We came across a small bay where logs floated in the water…I suppose it’s a lumber mill or loading area of sorts. But it was also swarming with Bald Eagles. Dozens of them really. Some were full grown, sporting their iconic white heads and tail feathers while others were youngster and almost completely brown (we’d learned at a birding event in Willcox, AZ that Bald Eagles don’t get their mature white feathers until about 8 years old). Watching their aerobatics I’d venture to say the older eagles were teaching those whipper snappers a thing or too.

Since the road to Stewart and Hyder is a 40 mile spur road (meaning an out and back side road) we opted to overnight two nights at Meziadin Lake Provencal Park ($40 CAD total for dry camping, addl charge for electric) and just made a day trip in the Jeep. We scored a site right on the banks of the lake and Clark was able to dust off his fishing pole and get his mind right for future fishing expeditions. The scenery is stunning. I’m not joking. Everything you’ve imagined Canada and the Last Frontier comes together at Meziadin. Spruce trees, Sitka, mountains, glaciers, crystal blue-green water…it’s really like a postcard.

Speaking of beauty, we hadn’t even reached Alaska yet (we weren’t even halfway there) and the scenery was already indescribable. I remembered back to a blog post I’d read by someone who wrote about having no desire to RV to Alaska, ever (I came across it while doing some research for this trip). He stated that no matter how beautiful it was, it wasn’t worth it to him. Basically saying that since he wouldn’t be seeing Alaska he would have no idea what he was missing. Besides, he’s been to plenty of beautiful places. I kinda get what he’s saying, sorta…I mean, we’ve never been to the Florida Keys and maybe we never will. But as I stood there looking around I honestly felt like I’d never seen this kind of beauty…and I wouldn’t have wanted to miss any of it… 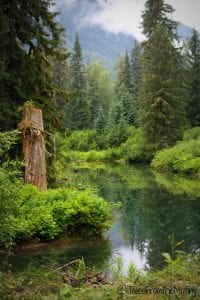 I think the trip is very much worth it…at least once. A truly unique experience.

Thank you. It was one we will remember forever.

Beautiful. It has been 12 years since we took that journey to spend the summer in Anchorage working at the Native Hospital. Thanks for sharing your journey.

Beautiful pictures Lynn. I am so glad you and Clark had the opportunity to experience a trip like that!

Thanks for letting me know the name of the flower. They were all over and so pretty! The roads were in great shape. The Cassier gets a little narrower the further north you go…and maybe a few rough patches (but it was all paved) but in overall good condition last year. Really, the roads didn't start to get "bad" until the Yukon…once you get outside of Whitehorse.

Your flowers are the Chocolate Lily! Haven't seen one in years, in SoCal there is a veral pond in Temecula where they can sometimes be found. Hyder is on our list too, how were the road conditions?