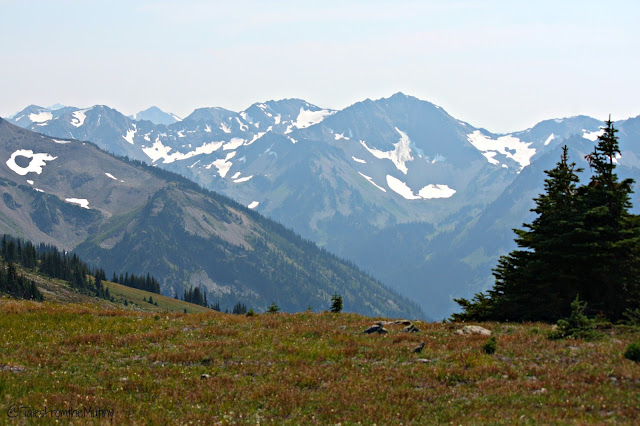 Note: I’ll be breaking this trip down into a series of posts because, at nearly a million acres, Olympic National Park is huge. It has 3 distinct ecosystems and offers a variety of adventures from alpine hiking and mountain climbing to beach combing. Distances between the various portions of the park can cover 150 miles. In just this blog post the distance between our campground, Shadow Mountain and Hurricane Ridge Visitor Center is 27 miles but takes about 50 minutes to drive. You can read part 1 here.

If you’ve been reading along in our travels you’ve probably noticed that we like to hike. I’m the more adventurous one (12 miles in the mountains doesn’t scare me, even if it ends up kicking my butt) while Clark can handle pretty much any distance…as long as it has adequate shade, isn’t too hot or too cold, and remains relatively flat…oh, and  there’s got to be a beer waiting for him at the halfway point, that’s the carrot. You’ve also probably noticed that regardless of the amount of research we attempt to do we often enter our adventures with some, shall we say…naivety. But there seems to be a good balance…we’re prepared for many adversities now, like having headlamps and fire starters after our pitch black nighttime hike in Death Valley, but we’re not so well researched (aka intimidated by certain descriptions) that we’re afraid to tackle some challenging but gorgeous hikes that might otherwise be missed, like this top 5 alpine hike at Bear Lake, Idaho.

Somehow I figured that hiking at Obstruction Point, a rough, dirt road off of the paved but harrowing Hurricane Ridge Road, would be a great idea.

Now, for some, the drive up Hurricane Ridge alone is bad enough. I’ve had people tell me they’ve never been because they get freaked out over the sheer cliffs and the had visions of their brakes failing on the way down (it is pretty steep). But this part of the park offers the best views of the mountains, access to some amazing trails and is a great spot for the ranger led star gazing programs. We actually liked it so much we made the drive twice (I didn’t think the road was bad at all, it’s paved and vehicle friendly, just don’t try to do it in your RV). 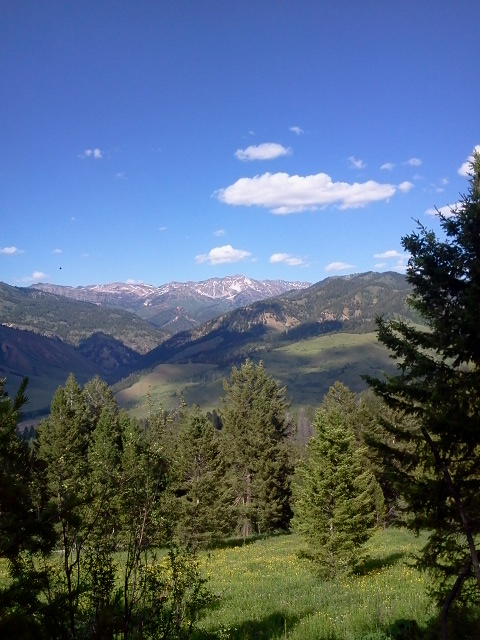 I’d read that Obstruction Point was the place to go hiking. I mean, if you’re going to drive all that way you want to get the most bang for your buck, right? And since the alpine meadow bug had bit me with phenomenal hikes at Bear Lake and Glacier National Park, I was fiending for another high altitude adventure. Having Chuck, our 4×4 Jeep Rubicon, made it kind of mandatory to drive out to the point anyway…at least that’s what I told Clark. I think the conversation went something like, “How about we just drive out to Obstruction Point for some photos at the very least? Then we can decide if we want to hike there.”. It ended with an 8+ mile hike down to Grand Lake and back. 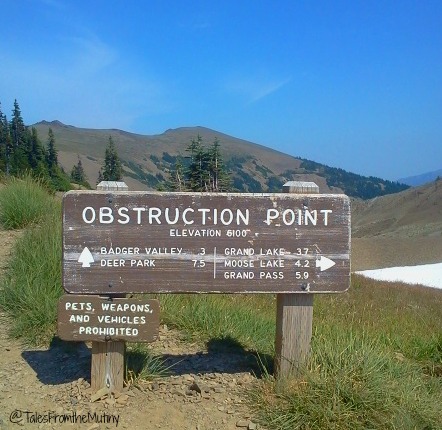 We parked Chuck at the trailhead and saw the signage for the various trails starting from there. I noticed that the hike to Grand Lake was only 3.7 miles…totally doable…especially when you have no idea what the elevation change entails. Ignorance is bliss…until you have to face a steep climb out and burning thighs (not to mention a husband reminding you every few steps that he prefers flat hikes). The views were already outstanding so I convinced Clark that hiking to this lake would be awesome.

We immediately faced a steady climb up… 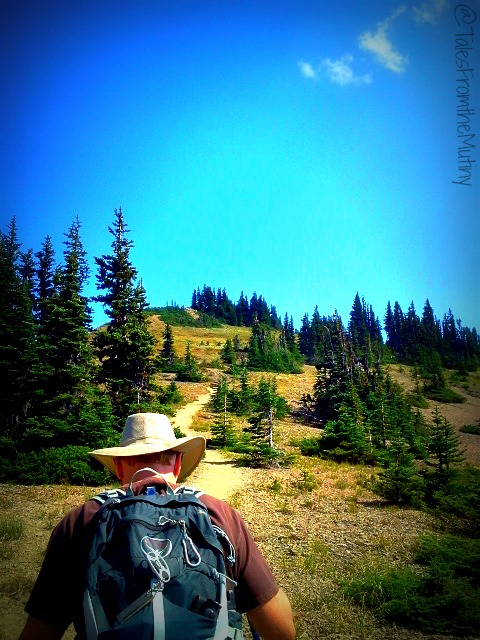 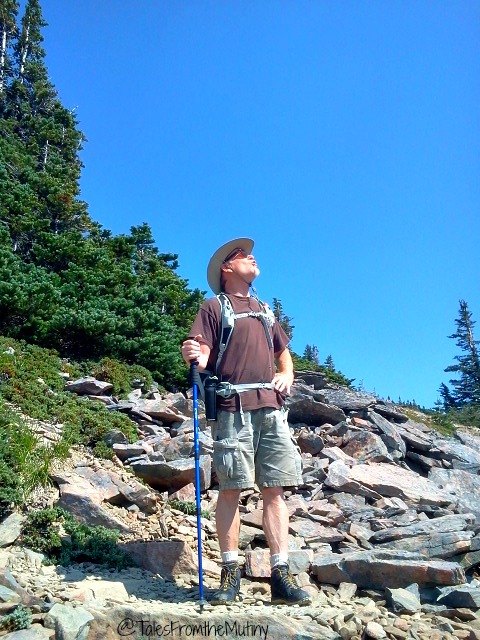 which was followed by a snow crossing 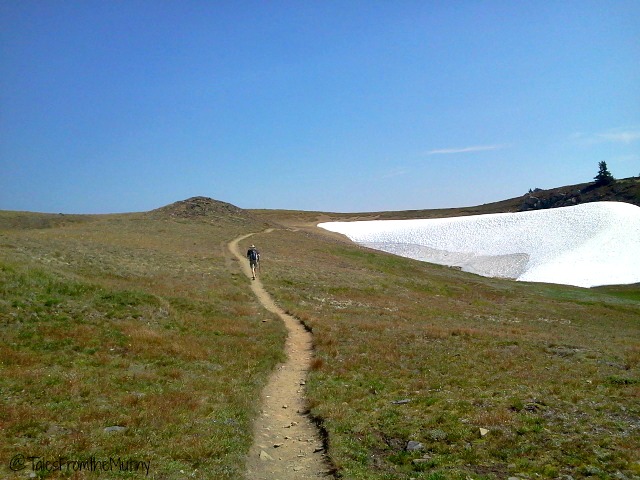 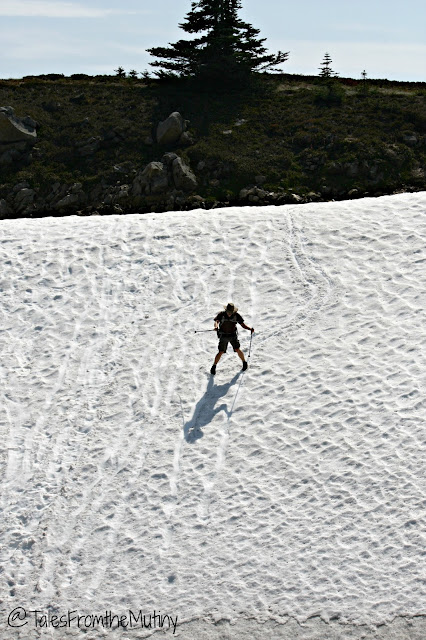 and then a steep descent that seemed to have no end. 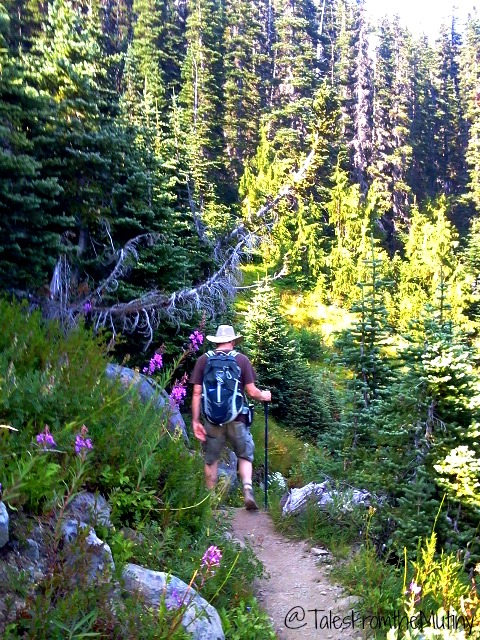 But the views…they were outstanding: 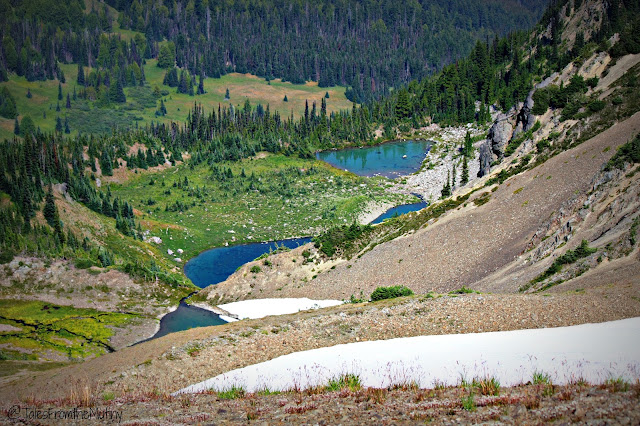 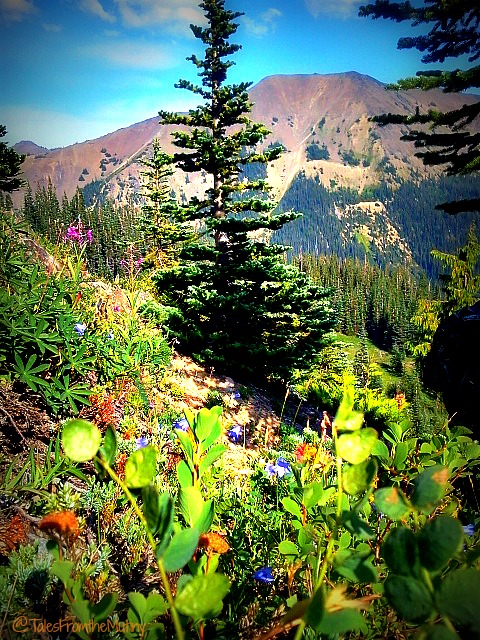 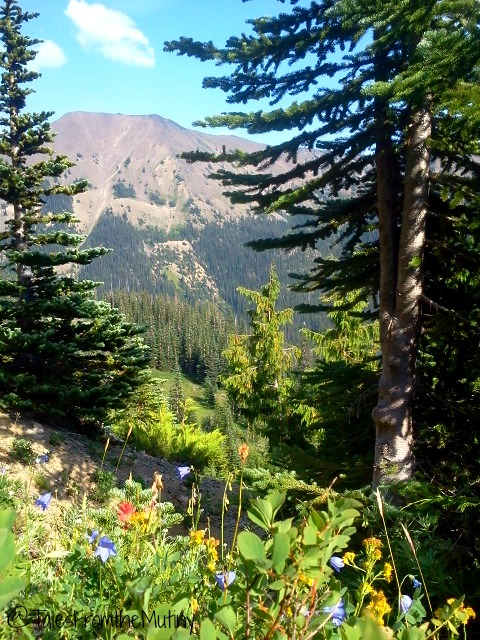 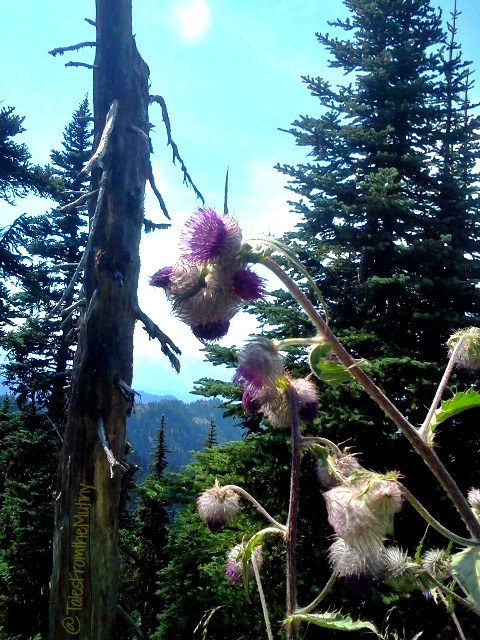 We got to a fork in the trail where I attempted to convince Clark into continuing on to Moose Lake. Thankfully he said “hell no”… 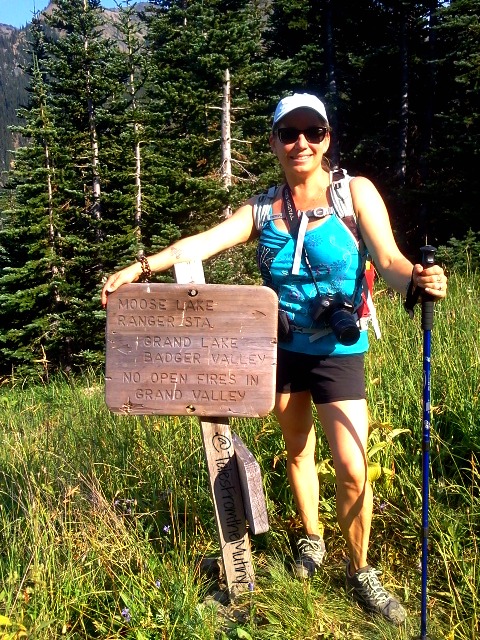 So we had our picnic at Grand Lake…as planned. 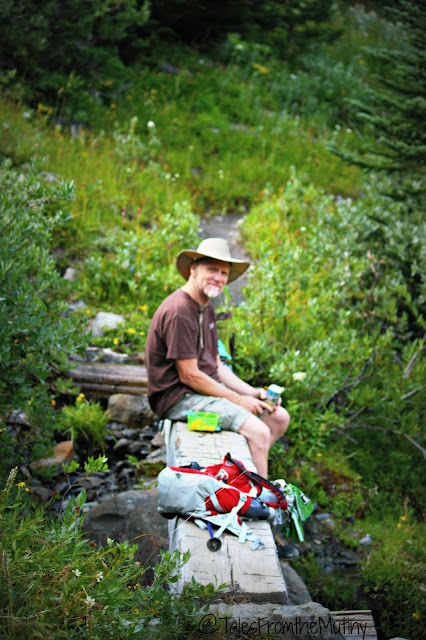 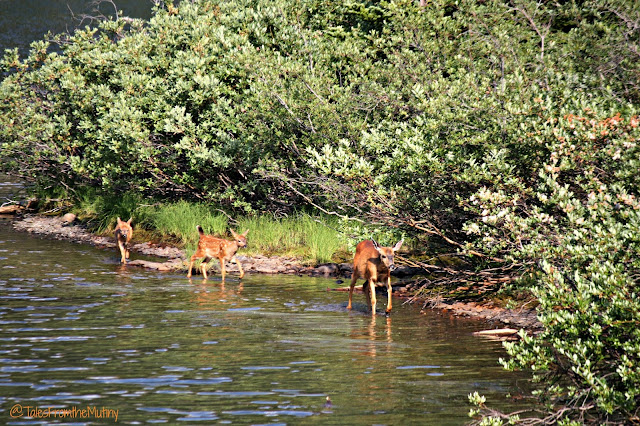 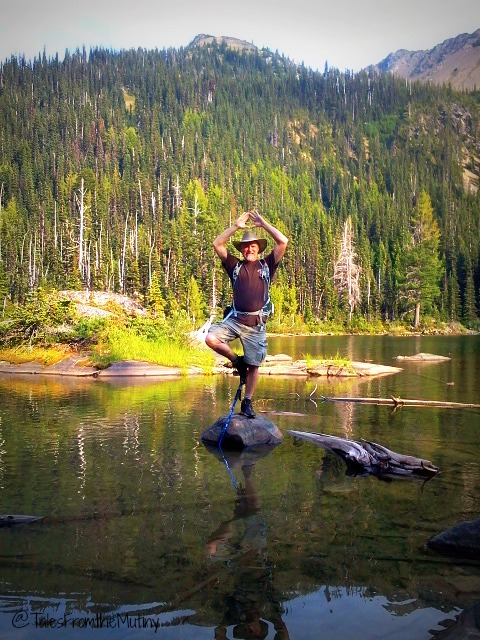 We got the wild idea to make this hike a loop rather than an out and back. After all, that descent was 1370 feet, which meant our climb back out would be very steep. We looked at the map and decided to return via the Badger Valley Trail, a lesser used trail that’s a bit longer but not as steep. The problem was our map wasn’t as detailed as it should be…so we didn’t know exactly how much longer (it turns out it’s about 1.2 miles longer making the hike 8.4 miles instead of 7.2 miles total). We did consult a couple of backpackers who were camped at the lake and who assured us the trail did, indeed, lead to the parking lot and wasn’t “much longer” than the trail we had taken down. 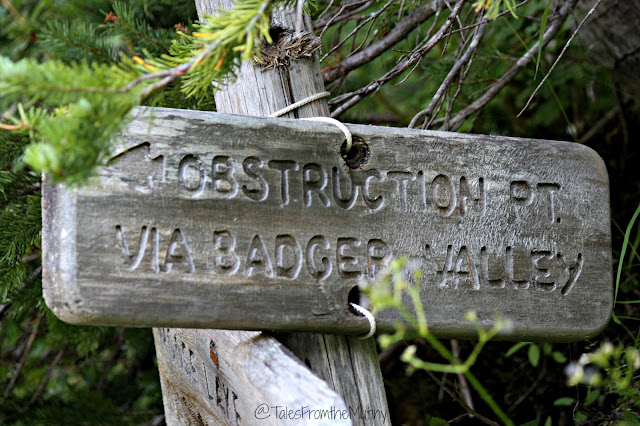 It started off as a great choice since we got to see completely different scenery which included a dense forest and wildflower filled meadows. 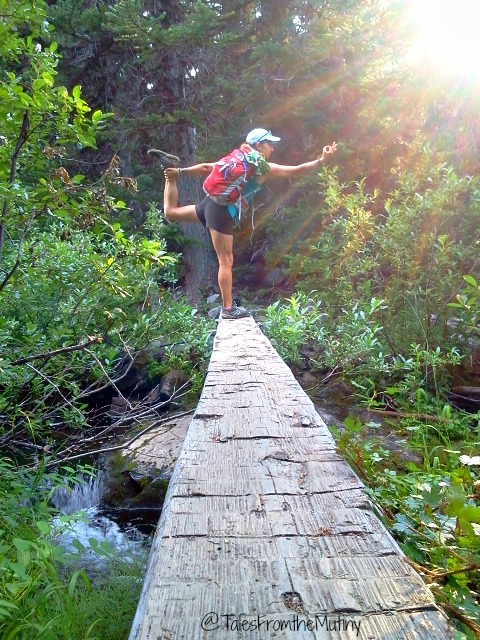 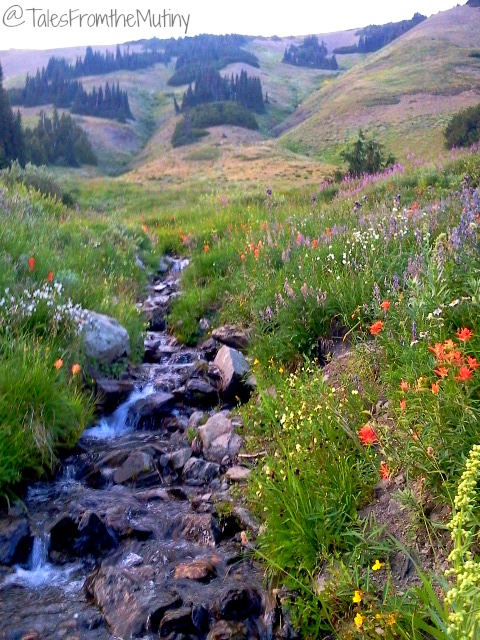 We saw some wildlife, including deer and a marmot, whose ear piercing screeches made us think for a few moments that there was an injured hiker nearby. Thankfully, that was not the case. 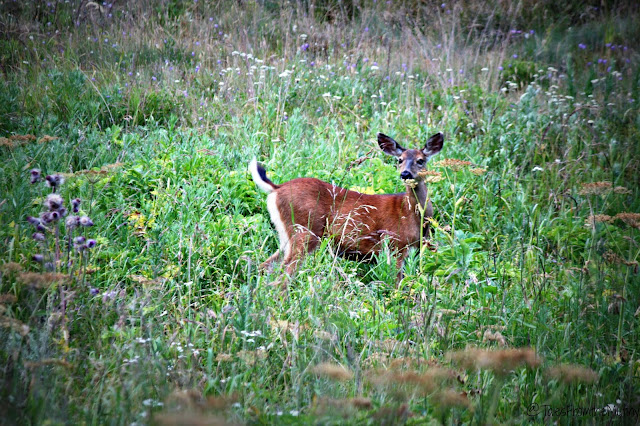 We stumbled across a couple who were setting up a tent in the trees near the trail. Like us, they’d also decided to take the Beaver Valley Trail back to Obstruction Point on a whim but were worried that they wouldn’t make it all the way back before it got too dark. We compared maps and chatted for a few minutes while observing the sky as dusk threatened the horizon. We hadn’t packed a tent or cold weather gear (we did have emergency and first aid kits but these aren’t really suitable for overnighting unless it’s truly a emergency) so spending the night was not an option. Their best guess was that we were 2 miles from the parking lot. I figured, based on the map and the amount of time we’d already been hiking) that it was less than 1.5 miles. We pushed on.

We’ve often joke about our 50/50 rule…which, for us, means that when presented with two choices (50/50 split) we will generally pick the wrong one. I know the math doesn’t make sense but that’s how we refer to it…let’s call it New Math. Anyways, when we got to the top of the ridge there was the proverbial unmarked fork in the road. It was almost dark now and impossible to tell where the trails led. We stood there for a moment and debated which way to go. We talked about the 50/50 rule, second guessing our instincts. But eventually I declared the parking lot to be to the left. I felt it in my bones. I trudged up the hill and rounded a corner and there it was…a glorious sight…the outhouse. We had made it.

Now, to be honest, we aren’t quite the bumbling idiots we appear to be when it comes to hiking (or RVing for that matter). Sure we’ve learned some of our lessons the hard way…and we continue to do so I’m sure. But we are actually pretty safe and fairly prepared. We carry a nice, well-appointed first aid kit, water purifier, extra clothing, headlamps, a fire starter, emergency whistle, cordage, a compass and a bottle opener/cork screw device (haha) in our backpacks. We always bring our phones (one on AT&T and one on Verizon) but have found very limited signal inside most National Parks. We also *almost always* have a detailed map and /or printed directions with landmarks for each hike we attempt. But once in a while we take a calculated risk like this one…and it adds to our enjoyment and experience. Of course, we were also smart enough to know that even if we had to camp out overnight we wouldn’t have died. We might have been hungry…but we don’t take life or death type risks.

Badger Valley-Grand Pass Loop (8.4 miles total) ~ This is a challenging hike due to the elevation change. Be aware that you’ll be starting at an elevation of about 6000 feet (which is often high enough to already affect some people) and dropping down to about 4755 feet…and then you have to come back up. I would suggest going down Grand Pass and coming back up Beaver Valley but either way this hike is one of our top 5 (so far) in our travels.

Hurricane Ridge ~ This is the National Park link to information about Hurricane Ridge. It’s always a good idea to check in with the rangers for current trail conditions, recommendations and to obtain maps. They want everyone to come back from their hikes and backpacking trips safely so you can bet on the fact that they will be aware of conditions and help you in any way possible.

All Trails Resource ~ Here’s a link to a website I use frequently to find hikes in our travels. The nice thing about this site is the ability to read reviews from others. We’ve found that rating like “moderate” or “intermediate” don’t always express the difficulty of trails as well as we’d like. Moderate for one person can be extremely technical for another. Reading reviews from a variety of people who have actually completed the hikes gives us a better idea of what to expect. There are also often tips on the best time of day to start, which direction is preferable in hiking a loop (clockwise vs. counter-clockwise) and even details that are important for not getting lost (or finding a cool picnic area or swimming hole) that aren’t always posted on “official” maps.