Mutiny Got a New Pair of Shoes

It’s an expense every RV owner dreads but knows is coming…the purchase of a new set of tires.

Now, despite my (Lynn) 20 year career in automotive service (or maybe because of it) I loath vehicle maintenance. However, since it’s in my wheelhouse pretty much anything that needs to be done to Chuck (the Jeep) or the Mutiny falls on my shoulders. And it’s really better that way, trust me, I know the game. But buying a set of 6 tires for a 20,000 pound RV that also happens to be our home was a whole new ball game, even for me.

As all good RVers learn, the best source of information is other RVers, so I turned to an RVing Facebook group and asked for tips and recommendations. I was directed to a great post Nina wrote on her Wheeling It blog. If, by chance, you haven’t heard of Wheeling It please follow the link and bookmark this blog…so much great information! Go on…I’ll wait…

Okay, if you didn’t click the link I’ll summarize quickly (but shame on you =))…Nina shares a few possible money saving tips (and lots of tire 411 we should all know). One tip is a potentially substantial discount on Michelin tires provided to FMCA members through their Michelin Advantage Program and another is to choose, if you can, to purchase your tires in a state that doesn’t charge sales tax. Tires are very expensive and, depending on which state you’re in, the tax alone could be hundreds of dollars “extra” on your already shockingly large bill.

Well, as luck would have it our route was going to have us on the eastern part of Oregon so I joined FMCA and began the process of finding an authorized dealer from their website.

And then we hit a snag.

The FMCA website was up long enough to charge us our $50 membership fee but I was unable to log on to get my member number and register our credit card, which is required to get any discounts. Perhaps it was my lack of foresight but we were expecting to be Oregon in just a couple of days and wanted to get the tires done now. So, I began making calls.

I started with the authorized Michelin dealer in Boise (where we were at the time) and got a quote for non-member prices. I then shopped around in Boise and Eastern Oregon (including a few other Michelin tire dealers).

All quotes were for the same tires:

Love’s Truck Center (Ontario, Or) Authorized Michelin Dealer: does not work on RVs

A Truck Repair Shop I Don’t Want to Name (Ontario, Or) Authorized Michelin Dealer: “I s’pose I could do tires on an RV but all’s I got are cheap tires. Class As are nice so you probably want good tires…maybe check with the Costco, they always beat my prices”. While I appreciate his honesty, I not a fan of Costco tires and would not think of putting them on my RV. This is based on my own experience in the automotive industry and is my opinion (which I’m entitled to, thankyouverymuch).

At this point I was tired of repeating the tire size (which has now become the number I rattle off regardless if you’re asking for it or my phone number) and worried that anyone that did have the tires in stock would some how sell out minutes before we rolled in. I also felt that even if I were able to get an FMCA discount at Jack’s it was unlikely to be less than the Les Schwab quote (even $100 off per tire wouldn’t help much). Obviously, since all of these quotes were for the exact same tires we went with the lowest price, which came from Les Schwab in Meridian. The shop also happened to be just a mile and half from where we currently were parked. 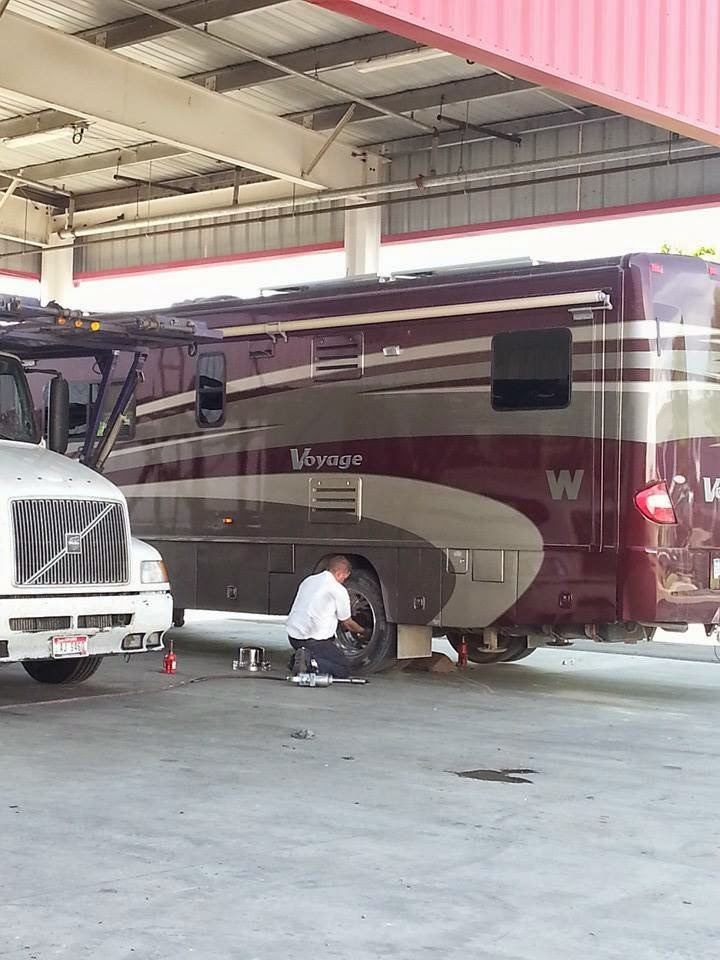 Although we didn’t pull into Les Schwab until after 3pm the staff was all over it. We were greeted promptly and were able to double checked the tire date codes to ensure they were “new”, meaning they were produced this year. Within 15 minutes they started working on the RV. In the meantime, we got the tires rotated on Chuck…for free (they are also Les Schwab tires).

The entire job took about 2 hours…way less than we expected. They basically had a small team working on the RV because they knew we lived in it and it would have to be done the same day. Everyone was great, from Steve O who held our tires, gave me the quote and promised to have us out the same day to the techs and even the lady who does the paperwork. It kinda helped make it a little less painful to hand over the credit card when it came time to pay.

A few notes and confessions:

We feel much better now that we have all new tires on both the Jeep (done in November 2014) and the RV (done May 2015)…even with our bank account being lighter. This is especially important as we head to Alaska in a few short weeks. Our journey begins June 1, 2015.

Thanks for the precious information.whoever looking for best tyres then visit our Michelin tyres showroom in Kothrud.For any enquiry contact 8055678063.