After realizing that our private site at Country Charm was a bit too remote for all of the sight-seeing we still wanted to do in the Black Hills, we decided to move to the town of Sturgis. One has to be careful about saying “We’ve been to Sturgis” because everyone will automatically assume you mean the motorcycle rally…and not the actual city of Sturgis…which is {confusingly} called Sturgis 365 days a year. Crazy, right?

We chose a lesser traveled route {Hwy 385} to go from Pringle to Sturgis so we could stop by this quirky little place: 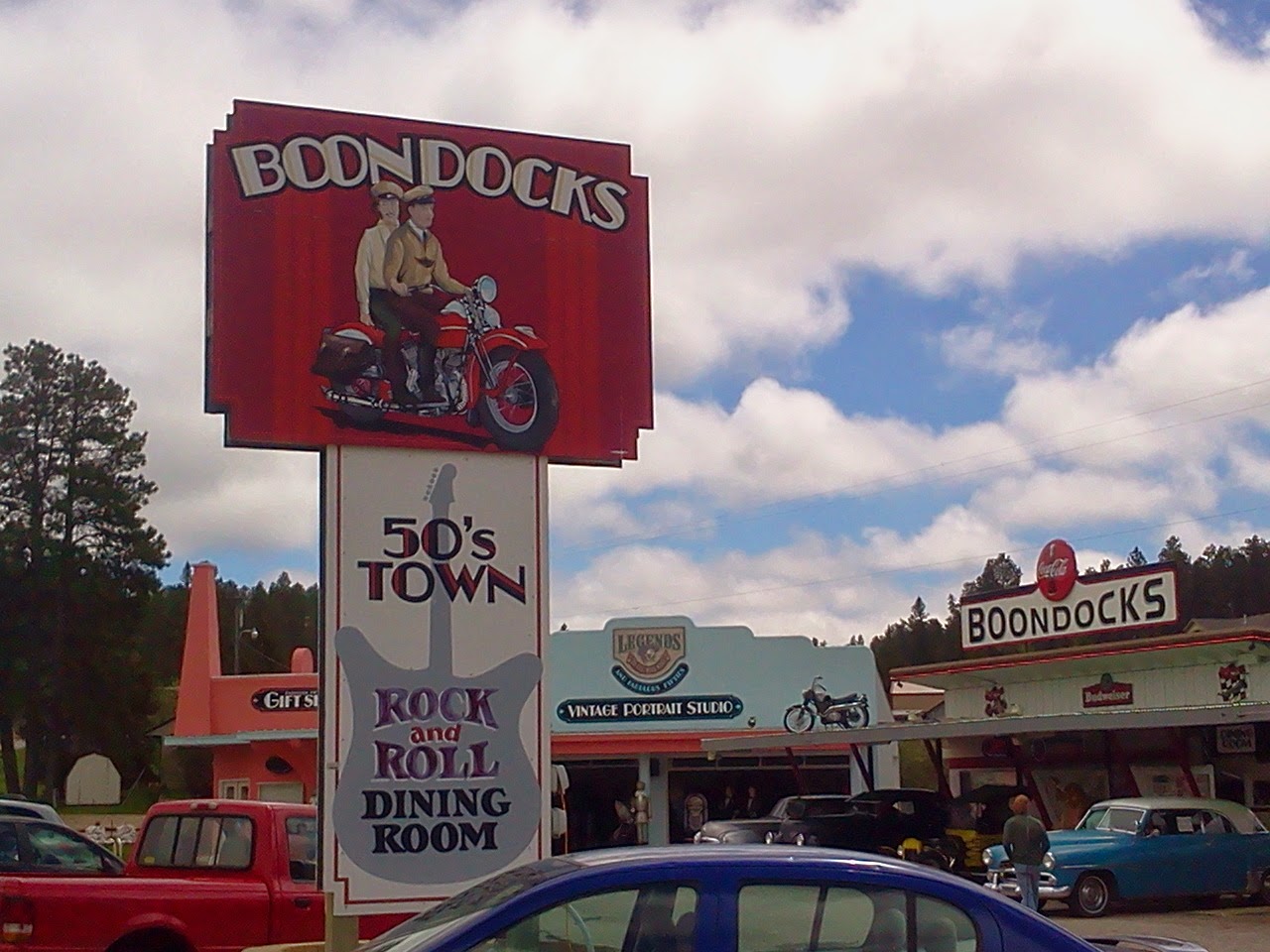 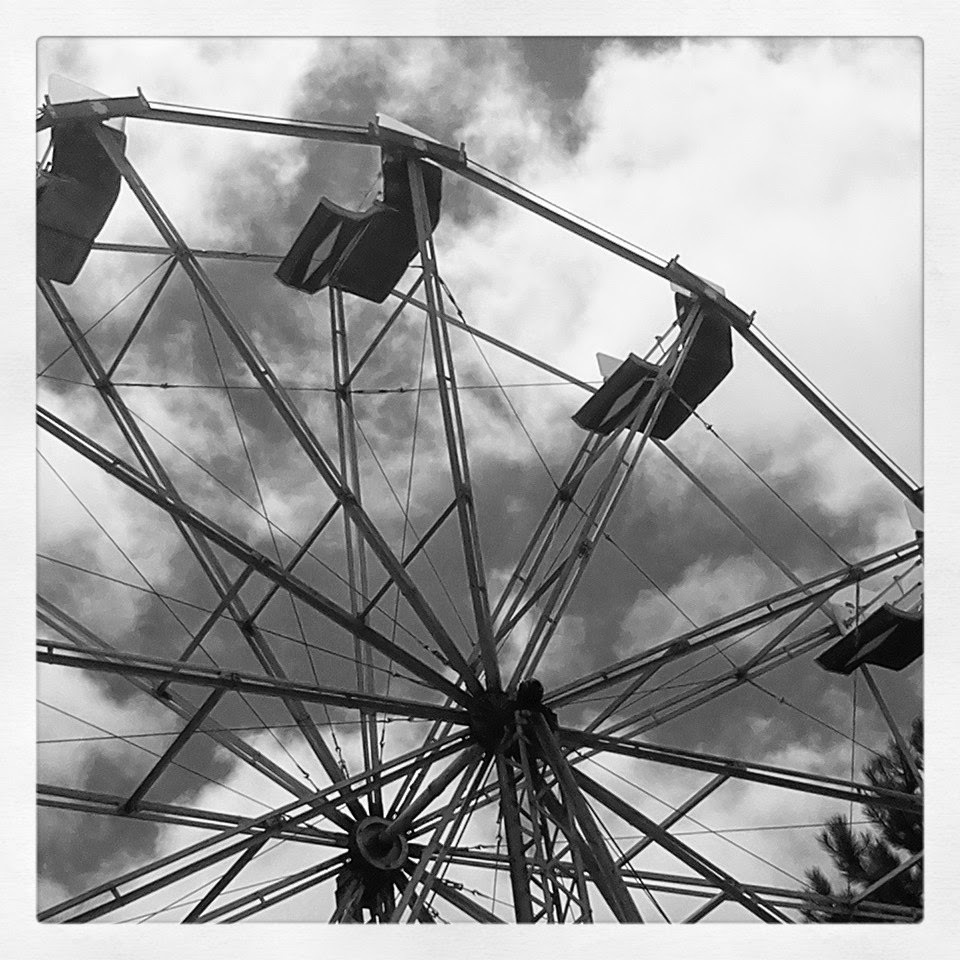 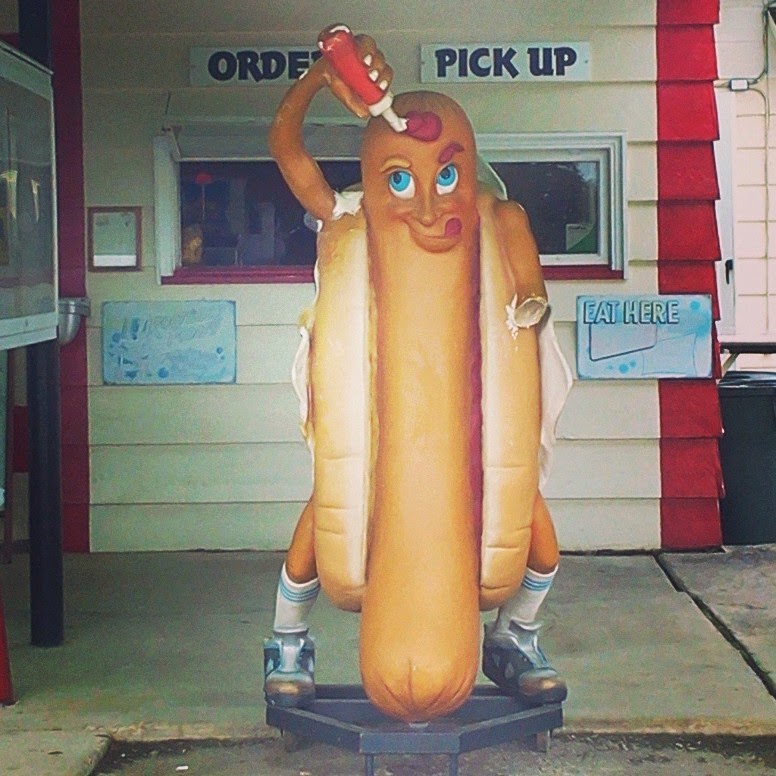 Which was totally worth it since we got to see this little guy: 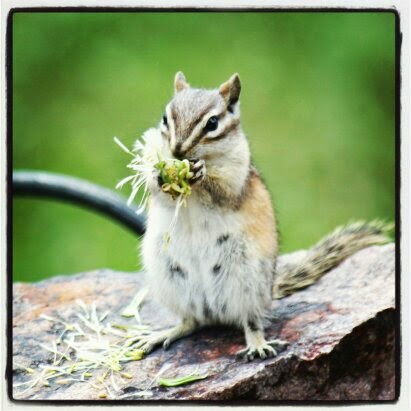 So, we moved our rig a few dozen miles up the road to Rush No More (hardy har…you see what they did there??) after finding out that Chris and Cherie of Technomadia would be staying there as well. Although we hadn’t met prior to this, Clark and I had been reading their blog and purchased their brand new ebook The Mobile Internet Handbook and were excited to meet our first official Facebook/Fulltime RVer friends.

When I saw them pull in (not that I was waiting and watching all day) I decided to give them some time to set up and relax, after all, that’s what we want to do after driving all day so it wasn’t until late in the evening before I had the nerve to go knock on their door. A combination of my shyness, respecting people’s personal space and being a bit “star-struck” led me to walk, kinda creepily, around their bus a few times before approaching the door. Luckily, Cherie happened to be coming out at that moment to get her cat, Kiki, and caught me before I lost my nerve and circled again.

Turns out Chris and Cherie are super nice and very real people. They made me feel welcome and even introduced me to Jim and Chris Guld (aka Geeks on Tour) who also happened to be staying at Rush No More. It was like hitting the jackpot as far as tech knowledge! Unfortunately, I am not that tech savvy and probably missed out on a ton of information had I known more about computers than the control-alt-delete method of fixing things. However, they made my evening when they all suggested we sneak over to the Mutiny and surprise (aka wake up) Clark with a visit.

Since the park only honored the Passport America discount 2 nights we moved on to Wyatt’s Hideaway Campground and RV Park in nearby Belle Fourche. Let me be serious here for a moment. If you read the reviews online for Wyatt’s you might be a little turned off…but when we visited (granted it was in May and NOT during the Sturgis Motorcycle Rally) it was only 6 months after owner Kent Wyatt’s wife died in his arms…leaving him a single father of a beautiful daughter. We found both of them extremely nice (perhaps a little shy) and very friendly. I’d venture to say if we had stayed longer Clark would have made a lifelong friend.

Okay…so Wyatt’s Hideaway is a GREAT spot to stay in May. There weren’t many other RVers there so we felt like we had the place to ourselves. There’s a creek that runs near the property and a railroad truss (I don’t recall ever being woken by a train during the night). It was the perfect base camp for exploring the geographic center of the 50 states and to tool along Spearfish Canyon Scenic Byway where you will find one of the sites used in filming Dances With Wolves. 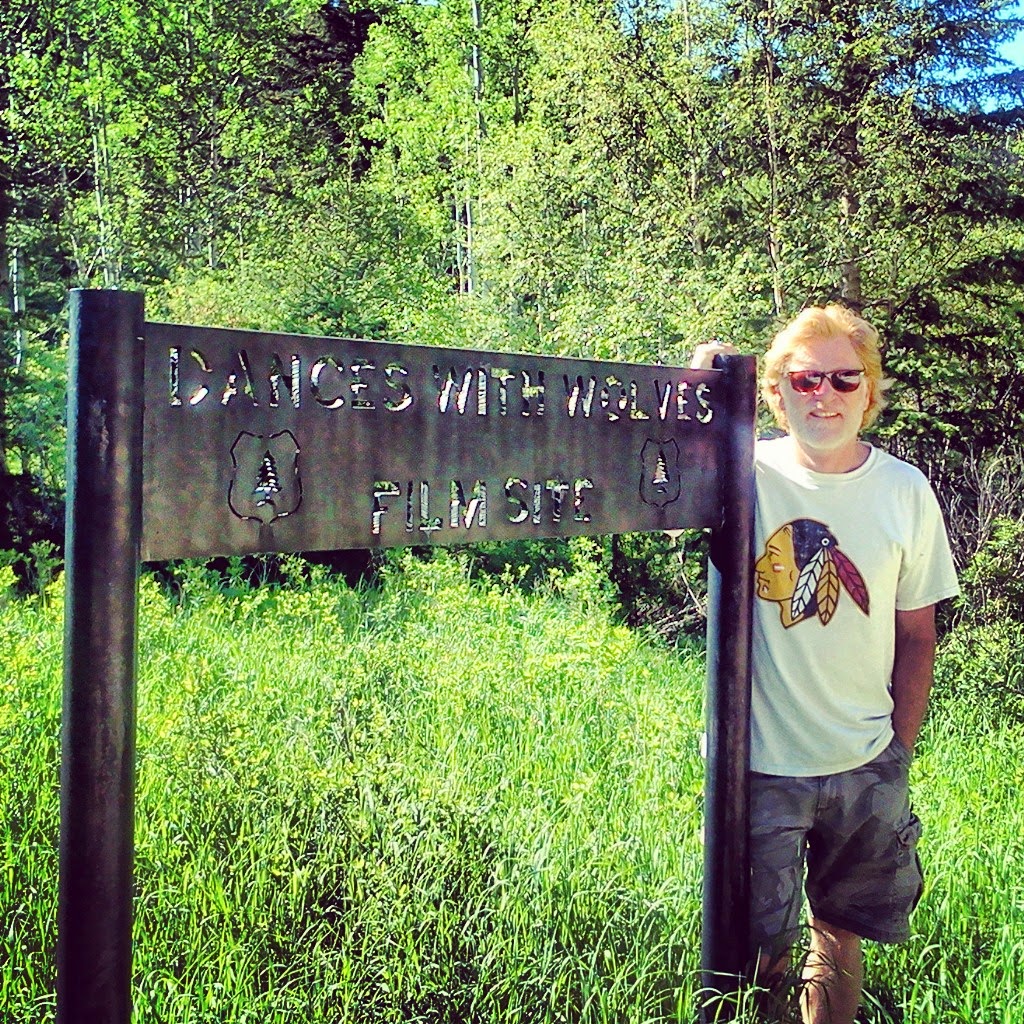 Belle Fourche also gave us access to Deadwood and Spearfish…two old tyme towns worth a visit. 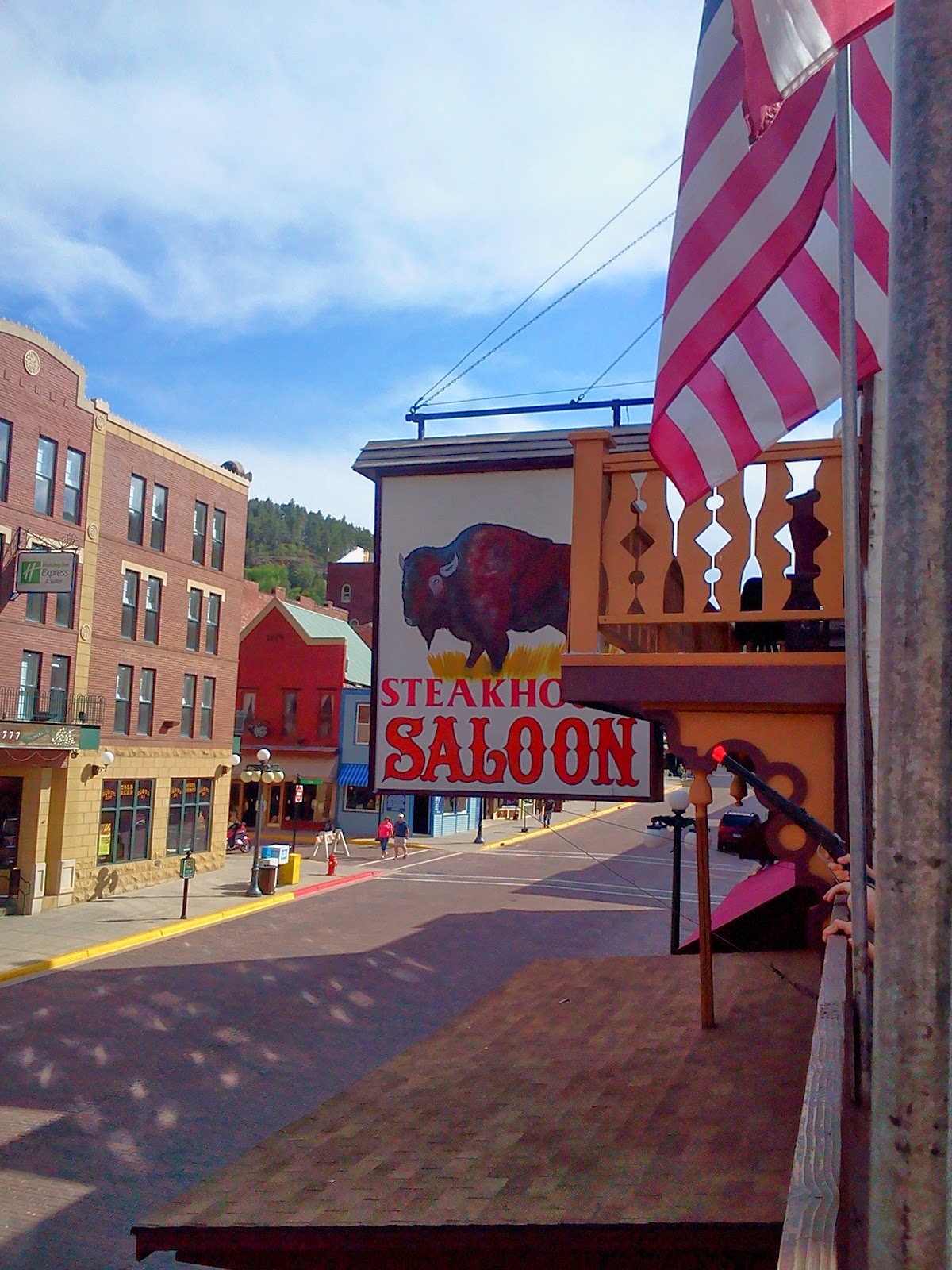 Our trip to the Black Hills was also a necessity as we completed our transformation to become South Dakota residents. The first step to doing so was to obtain an address. We chose Americas Mailbox for a variety of reasons {recommendation by someone we trust, price, location, mail holding and forwarding services, vehicle registration services} and have no complaints. They’ve handled our vehicle registrations without incident and in an extremely timely manner (and at very little cost to us) and are quick to get our mail forwarded to us when we submit a request.

For us, there were many benefits to declaring South Dakota as our residence. We knew we would never be able to afford to live in California again (at least not without working 9-5) and we had already severed all ties to the state (except our driver’s licenses). By becoming S.D. residents we’ve saved a ton of money on vehicle registration, auto insurance, health insurance and state income taxes. We love the state and have considered living there, at least during summer, if and when we decide to hang up the Mutiny’s keys.

Some of our reasons:

Rather than try to explain the in’s and out’s of considering whether or not change your state of residency I’ll just direct you to the blogs we consulted.

Ramona Creel ~ Preparing to Hit the Road
Technomadia ~ Picking a Domicile, Getting Mail & Voting as a Nomad
Wheeling It ~ Home is Where You Park It…or is it?

We are very happy with both Americas Mailbox and Passport America…and we speak of them frequently. If we’ve helped influence your decision to utilize either of these services please mention our name (our “PMB” is 3961 for Americas Mailbox) and maybe they will comp us a month of service (at no charge to you, of course). Word of mouth is the best advertisement after all.

*We chose South Dakota because it works for us. With the Affordable Care Act the decision becomes a little more involved so I recommend doing further research to ensure your new state will provide the coverage you need. Here are a few posts regarding this issue:

Heathcare and Staying Healthy on the Road
The ACA (aka Obamacare) & It’s Impact on Fulltime RV Health Insurance
rverhealthinsurance.com

Oh yes! We will definitely be visiting…and actually plan on being there sometime the fall. California will always have a special place in our hearts. And so does the greatest book club in the world!! xo

Thanks so much for the link! Looking forward to meeting up down the road. =)

Well you have to at least come back to Calif to visit!!!! We will have a special book club "meeting" when you do..Miss you Lynnie….

Oh.. thank you so much for the fond memories of our first meeting! So glad you got courage up to say hi, because it's been truly wonderful to become friends with you both ever since.

Oh, and here's a link to our post about our time in SD together, with pictures 🙂 – http://www.technomadia.com/2013/06/operation-montana-fathers-day/

Hugs to you both, and can't wait until our paths cross again!