As we continued our journey toward Death Valley our main objective became staying ahead of the weather. It just so happened that we enjoyed near perfect weather in Yosemite only to find out that it dumped snow the day after we left! We are not equipped to drive in the snow (no chains and no experience in this big 20,000 pound rig), something we need to deal with sooner than later.

After leaving Squaw Valley (outside of Sequoia & Kings Canyon National Park) we headed for California Hot Springs which is near Giant Sequoia National Monument. We figured that if we had to have an abbreviated tour of the National Park at least we could get our fix of these giant trees at the southern edge of the Park. And, of course, soaking in the hot springs would be alright too.

Now California Hot Springs is pretty much out in the middle of nowhere. What you’ll want to do is drive about halfway between Fresno and Bakersfield and head East from Earlimart for 38 or so miles. You’ll know you’re headed in the right direction when all of civilization drops behind you, you lose cell service, there are absolutely no gas stations, markets, houses or buildings of any sort and the only other (used to be) living thing you see is a dead coyote on the side of the road.

But if you persist, and you’re lucky to hit this place up at the right time of year, you will be rewarded with the loveliest camping spot all to yourself for an entire week. Which is exactly what we did. Nothing will grant you peace of mind and total rejuvenation like being so far from everything with no phone or Internet…and did I mention there’s a hot spring?

*Full disclosure: Thanks to clear skies and a rather large investment with DISH Network we were able to get satellite TV, although we used it sparingly (after all the S.F. Giants were playing in the World Series).

Over the course of the week we were able to take a drive in the Jeep to Giant Sequoia National Monument and walk along the Trial of 100 Giants. We also drove through the park, stopping at various points to observe the amazing landscape. 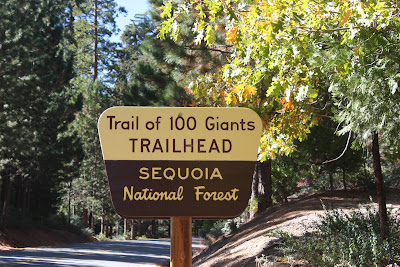 We made it to the town of Porterville which not only had a Lowes (where we picked up a huge load of firewood) but a Starbucks as well. I know, I know…we (or more precisely I) should be able to quit feeding the corporate beast but dang it, when you’ve gone without for 3 weeks you almost feel like you deserve a Cinnamon Dulce Soy Latte no foam, hold the whipped cream. Besides, we got to use the free wifi on our phones for a few minutes and check important things like Facebook and Twitter the weather and road conditions.

On Friday the little town of Pine Flat (2 miles down the road) was hosting a Halloween party at the local (and only) bar called the Rabbit Foot Trail Inn. We headed over a little early to catch the S.F. Giants in the World Series on TV and were welcomed with open arms. Everyone was friendly and the owner chatted it up with Clark for quite a while, telling him all about the history of the place and himself. A few short hours later and the place was packed with pirates, zombies and pimps. Karaoke was sung…some good and some not so much, but people were dancing and having a great time.

We spent a couple of days at the hot spring fed pool and hot tubs, soaking up some sun and enjoying the ulta-soft water telling each other how “horrible” life is to be in such beautiful place, with perfect blue skies, floating in the Olympic sized pool which we had all to ourselves, the day after the S.F. Giants won the World Series. Honestly, we are spoiled and life is sooooo good.