The beginning of November, and with yours truly at the wheel, brought us to one of the most magical places on Earth…you guessed it, Death Valley {certainly you didn’t think Disneyland, did you?}. If you’ve ever read my other blog, Learning Curves, you’d know how Death Valley became such an important part of my life. I was excited to be coming back again, especially with Clark. Little did I know we would face some challenges that would test our love {well, not exactly, but it did test our navigation and survival skills}.

As I drove the Mutiny into the park, hands at 10 and 2, eyes intently on the road while checking my mirrors periodically, we heard a loud rumble and felt the Mutiny vibrate as if I had hit some kind of overhang. My mind couldn’t comprehend this since we were literally in the middle of a desert with no tree branches overhead (or anywhere else for that matter) dragging across the top of the rig. But a split second later a fighter jet buzzed over us no more than 300 feet above our roof (of course it seemed much closer to me…as if I could see the twinkle in the eye of pilot as he laughed at the the ‘old people’ he just scared the hell out of).

After peeling my hands off the steering wheel I decided to let Clark finish driving to our camp site in Panamint Springs. The rest of the drive in we were alternately entranced {and terrified} by the narrow winding roads and the ‘dog fight’ aerodynamics of the jets flying through the valley. A celebratory drink at the bar was well deserved {and delicious}.

The next morning we hiked to Darwin Falls, which runs year round (surprise, surprise) and is also the source of water for Panamint Springs. 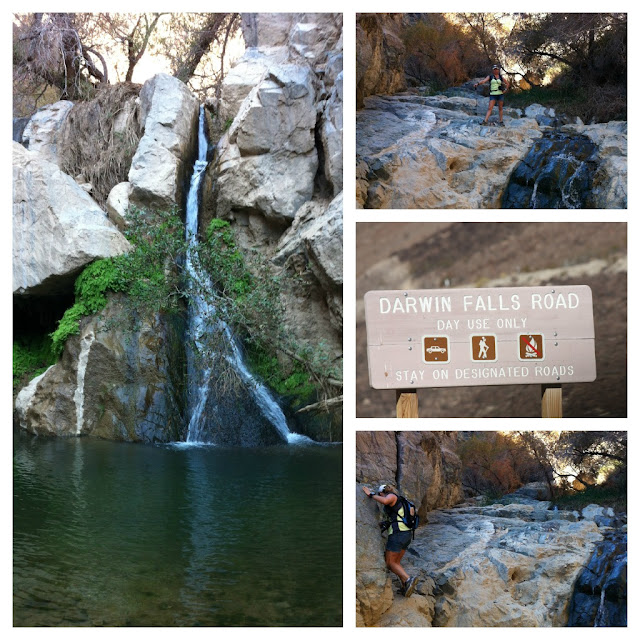 The following day we took a trip to Skidoo, an old gold mining town, and then on to the Charcoal kilns.

And then, somehow I convinced Clark to hike to Panamint Dunes. In the first picture you can make the dunes out in the background…I mean, it looks far but not that far, right? In the second picture I do believe he had started to curse my name…or perhaps he was just calling out for water, I’m not sure. The third picture was our reward…standing atop the dunes as the sun started to set, making for a wonderful color display.

So, did you catch that we were on the dunes for sunset? We had thought it would be better to hike a little later in the day since it was still topping 90 degrees during the heat of the day. Besides, everyone knows that sunset is the best time to visit any sand dunes so we set out at about 4 p.m. for the 3.5 mile {one way} hike. What we hadn’t planned on was just how dark it got and how quickly it happened. Of course we packed our headlamps and a small flashlight…and we had picked a mountain peak as a point to guide us back to the Jeep…but somewhere along the hike back it felt as if we were standing in a forest so dense we couldn’t tell which direction we were walking, or if we were just walking in circles.

One would think that in a fairly flat, desert setting that one could easily navigate back across 3.5 miles without a problem. But as darkness crept in and the moon failed to rise we watched the mountain tops (including our focal point to navigate back to the Jeep) slowly get swallowed up into the black void. At this point it crossed our minds that it might have been a bad idea to attempt this hike so late in the day and that there was a chance we would walk right past the Jeep or have to camp out until dawn (only to find we were sleeping 10 feet from the Jeep, I feared). But thankfully, as we continued to sweep the beam of the flashlight along what we hoped to be the horizon, we caught a reflection from the license plate. Salvation!

Obviously we made it back safely and I did have my Garmin GPS with me so I could gauge how far we had to walk back (so long as we were walking in a straight line) but it was a good lesson in preparation. One thing’s for sure, I’m hoping that all of our lessons aren’t going to have be learned the hard way.

This looks really adorable. I am looking forward to stay here for some while.
death valley